KIEV, Ukraine (Associated Press) — Fearing that a call for a truce was a ruse, protesters tossed firebombs and advanced upon police lines Thursday in Ukraine’s embattled capital. Government snipers shot back and the almost-medieval melee that ensued left at least 70 people dead and hundreds injured.

Video footage on Ukrainian television showed shocking scenes Thursday of protesters being cut down by gunfire, lying on the pavement as comrades rushed to their aid. Trying to protect themselves with shields, teams of protesters carried bodies away on sheets of plastic or on planks of wood.

Protesters were also seen leading policemen with their hands held high around the sprawling protest camp in central Kiev. Ukraine’s Interior ministry says 67 police were captured in all. It was not clear how they were taken. An opposition lawmaker said they were being held in Kiev’s occupied city hall. President Viktor Yanukovych and the opposition protesters who demand his resignation are locked in an epic battle over the identity of Ukraine, a nation of 46 million that has divided loyalties between Russia and the West. Parts of the country — mostly in its western cities — are in open revolt against Yanukovych’s central government, while many in eastern Ukraine favor strong ties with Russia, their former Soviet ruler.

A group of protesters get scorched during clashes with police on Thursday, after a brief truce with the country’s embattled leader.

At least 99 people have died this week in the clashes in Kiev, a sharp reversal in three months of mostly peaceful protests. Now neither side appears willing to compromise, with the opposition insisting on Yanukovych’s resignation and an early election and the president apparently prepared to fight until the end.

Thursday was the deadliest day yet. An AP cameraman saw snipers shooting at protesters in Kiev and video footage showed at least one sniper wearing a Ukraine riot police uniform.

The carnage appears to show that neither Yanukovych nor the opposition leaders appear to be in control of the chaos engulfing Ukraine.

Dr. Oleh Musiy, the top medical coordinator for the protesters told the AP that at least 70 protesters were killed Thursday and over 500 injured, and the death toll could well rise further.

There was no way to immediately verify his statement. Earlier in the day, an Associated Press reporter saw 21 bodies of protesters laid out Thursday on the edge of the capital’s sprawling protest camp.

A truce announced late Wednesday appeared to have little credibility among hardcore protesters at Kiev’s Independence Square campsite. One camp commander, Oleh Mykhnyuk, told the AP even after the truce, protesters still threw firebombs at riot police on the square. As the sun rose, police pulled back, the protesters followed them and police then began shooting at them, he said.

The Interior Ministry warned Kiev residents to stay indoors Thursday because of the “armed and aggressive mood of the people.”

Yanukovych claimed Thursday that police were not armed and “all measures to stop bloodshed and confrontation are being taken.” But the Interior Ministry later contradicted that, saying law enforcers would get weapons as part of an “anti-terrorist” operation.

Some signs emerged that Yanukovych is losing loyalists. The chief of Kiev’s city administration, Volodymyr Makeyenko, announced Thursday he was leaving Yanukovych’s Party of Regions.

“We must be guided only by the interests of the people, this is our only chance to save people’s lives,” he said, adding he would continue to fulfill his duties as long as he had the people’s trust.

Another influential member of the ruling party, Serhiy Tyhipko, said both Yanukovych and opposition leaders had “completely lost control of the situation.”

“Their inaction is leading to the strengthening of opposition and human victims,” the Interfax news agency reported.

The parliament building was evacuated Thursday because of fears that protesters would storm it, and the government office and the Foreign Ministry buildings in Kiev were also evacuated. But a parliament session convened in the afternoon, with some pro-government lawmakers heeding the opposition’s call to work out a solution to the crisis.

As the violence exploded and heavy smoke from burning barricades at the encampment belched into the sky, the foreign ministers of three European countries — France, Germany and Poland — met with Yanukovych for five hours after speaking with the opposition leaders. The EU ministers then returned to speak again with opposition leaders.

The 28-nation European Union began an emergency meeting on Ukraine in Brussels to consider sanctions against those behind the violence.

The latest bout of street violence began Tuesday when protesters attacked police lines and set fires outside parliament, accusing Yanukovych of ignoring their demands to enact constitutional reforms that would once again limit the president’s power.

Prior to the deaths Thursday, the Ukrainian Health Ministry said 28 people have died and 287 have been hospitalized this week. Protesters who have set up a medical facility in a downtown cathedral so that wounded colleagues would not be snatched away by police say the number of injured are significantly higher — possibly double or triple that.

The Caritas Ukraine aid group praised the protest medics but said many of the wounded will need long-term care, including prosthetics.

The clashes this week have been the most deadly since protests kicked off in November after Yanukovych shelved an association agreement with the European Union in favor of closer ties with Russia. Russia then announced a $15 billion bailout for Ukraine, whose economy is in tatters.

The political jockeying for influence in Ukraine has continued. In Moscow, the Kremlin said President Vladimir Putin was sending former ombudsman Vladimir Lukin to Ukraine as a mediator.

President Barack Obama stepped in to condemn the violence, warning Wednesday “there will be consequences” for Ukraine if it keeps up. The U.S. has raised the prospect of joining with the EU to impose sanctions against Ukraine.

Russian Prime Minister Dmitry Medvedev said Russia will “try to do our best” to fulfill its financial obligations to Ukraine, but indicated Moscow would hold back on further installments of its bailout money until the crisis is resolved.

“We need partners that are in good shape and a Ukrainian government that is legitimate and effective,” he said.

At the Winter Olympics in Sochi, Ukrainian alpine skier Bogdana Matsotska, 24, said she will not take part in Friday’s women’s slalom due to the developments in Kiev.

“As a protest against lawless actions made toward protesters, the lack of responsibility from the side of the president and his lackey government, we refuse further performance at the 2014 Sochi Olympic Games,” her father and coach, Oleg Matsotskyy, wrote in a Facebook post. 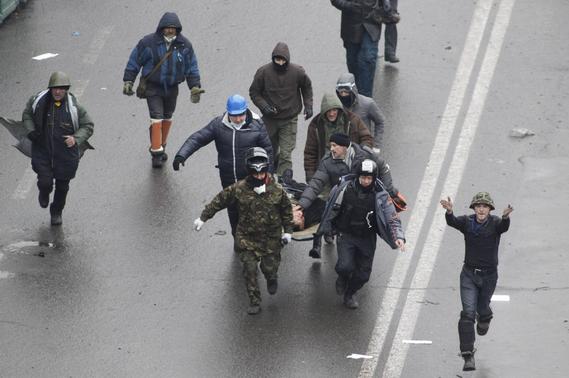 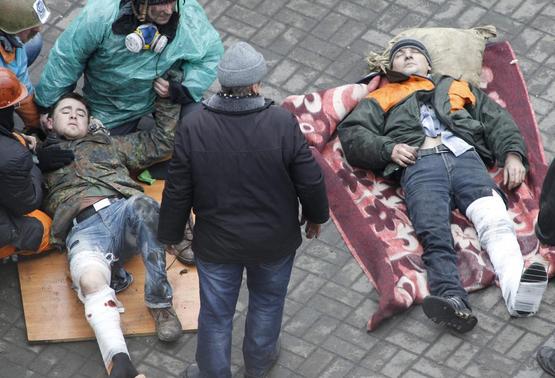 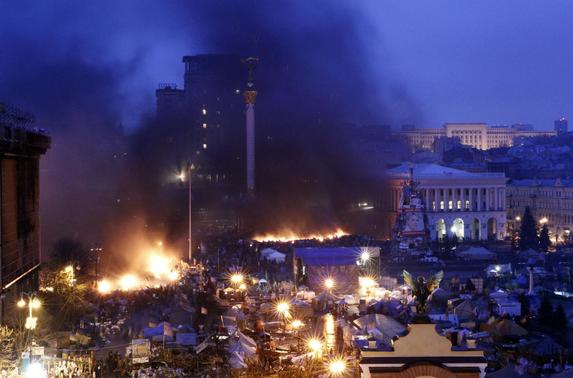 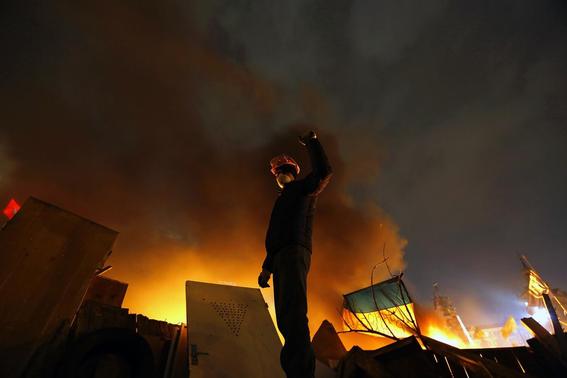