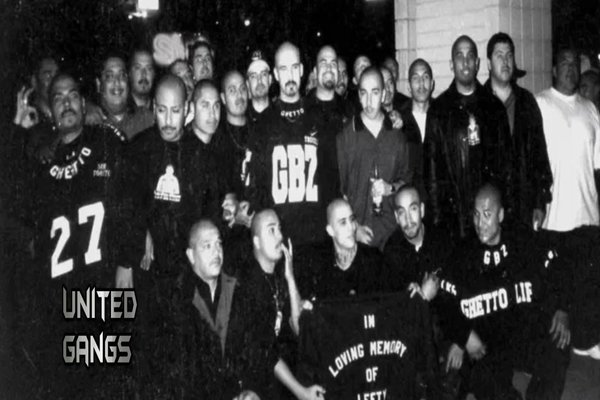 The Ghetto Boyz Gang (GBZ), also known as the Ghetto Boyz (GBZ) or Ghetto Lifers are predominantly, but not exclusively, a Mexican-American criminal street gang, located on the East Side in South Central Los Angeles, California. The Ghetto Boyz were established during the 1980s and claimed the areas bordered by Adams Avenue to Jefferson Blvd between San Pedro Street and Grand Avenue.

The Ghetto Boyz are allies of the Eazy Riders (ERS) and former allies of the East Side Varrio 36th Street Gang. These gangs formed around the same time and feuded with older established gangs in the area, such as the Clanton 14th Street and 23rd Street Primera Flats, two of the oldest street gangs in East South Los Angeles.

The Ghetto Boyz (BGZ) had a fierce rivalry with the 23rd clique of the Primera Flats (PF) over the “Trinity Park” (recreation center) located on Trinity Street near 25th Street. However, both gangs claimed 25th Street as being part of their territory, causing a history of bad blood. Many have died as a result of this deadly rivalry, including innocent bystanders with no gang affiliation.

For instance, on April 11, 2002, an eight-year-old boy playing at the Trinity Park, died after being struck in the chest by a stray bullet, during a gang-related shooting between the Ghetto Boyz and the Primera Flats. However, the Ghetto Boyz denounced the park as territory, do to unwanted attention from the police and possibly being green-lighted by the Mexican-Mafia (over innocent kids and females being killed), according to a respected member of the Ghetto Gang.

Lil Silent, is an American Chicano rapper and original member of the South Central Ghetto Boyz Gang. He is best known for his tribute songs dedicated to the memories of fallen members of the Ghetto Boyz Gang. Lil Silent also dedicated a song to Christina Salazar,  also known as Lil Chucky, a 17-year-old female who was shot to death near Maple Avenue and Adams Boulevard, on March 2, 2011.