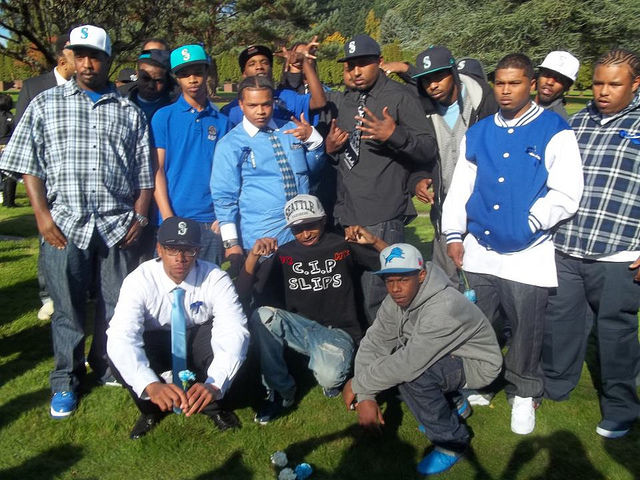 The Rollin 60s Neighborhood Crips (R60NHC), also known as the Rich Rollin 60’s are a large primarily African-American street gang located on the West Side of South Los Angeles, (formerly known as South Central, LA) California. The Rollin’ 60′ NHC originated as a clique of  Stanley “Tookie” Willams gang, the Westside Crips in the 1970’s.

Their territory stretches from Slauson Ave to Florence Ave, between Western Ave and around Crenshaw Blvd. They are also under the Rollin O’s and Neighborhood Crips umbrella. They are believed to be one of the most infamous and fierce black gang in the Hyde Park/Crenshaw region of Los Angeles. The Rollin 60’s members are known to sport Seattle Mariners baseball caps with the letter “S” which represent Sixty (60’s Crip).

The Rollin 60’s Neighborhood Crips have several cliques such as the Avenues, Front Hood, Overhills, and a few other cliques. Youth members mostly attend Crenshaw High School as well as Westchester High School. Police authority believes the Rollin 60’s membership range from 6’000 to 8,000 making them the largest black gang in all of Los Angeles County.

The Rollin 60’s and the Eight Tray Gangster Crips, were close allies and often fought rival gangs side by side. However, they were full fledge enemies by the mid-1980’s. This rivalry is responsible for being the first Crip on Crip rivalry in history. This feud spilled over into surrounding neighbor gang’s.

Gang’s started pledging allegiance to one or the other (Rollin 60’s or the Eight Tray Gangster Crips). Gang’s who aligned themselves with the Rollin 60’s adapted the Neighborhood Crips also known as Deuces or Deuce Gang’s (2x) and gang’s who aligned themselves with the Eight Tray Gangster Crips adapted the “Gangster Crips” also known as Trays or Tray Gang’s (3x). This conflict has resulted in over 30 gang-related deaths and over twenty non gang-related casualties.

Nipsey Hussle (rapper), who debuted with “Bullet’s Have No Names” (Trilogy), which spawned his successful single “Hussle In The House,” is affiliated with the Rollin 60’s. Big U (of Uneek Music), CJ Mac, Kurupt, as well as Keita Roc, who was signed to Death Row Records thru Suge Knight has ties to the RSC.

Tiequon A. Cox, who stabbed the co-founder of the crips “Stanly Tookie William’s,” was also a member of the Rollin 60s (NHC). Kody “Monster” Scott, who was affiliated with the Eight Tray Gangster Crips. Mention the feud between the Rollin 60s and the Eight Trays in his memoir titled “Monster: Autobiography of an LA Gang Member.”