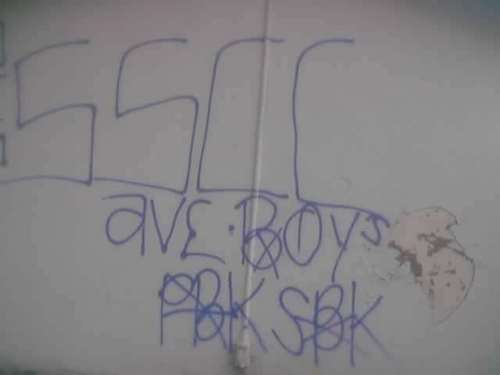 Despite their geoghaphical location being on the Compton’s East Side, they claim South Side, due to their turf being in the Southern area of Compton. Members are known to wear apparel by the Seattle Mariners with the “S” (for South) to signify their affiliation with the South Side Crips. They are composed of smaller cliques such as the Burris Street Crew, Glencoe Ave, and the A-Line (Alondra Blvd).

Their neighborhood runs from Compton Blvd to Greenleaf Blvd, between Long Beach Blvd and Santa Fe Ave. Their territory is north of the 91 (Gardena) Freeway,

and West of their long-time ally the Atlantic Drive Compton Crips. This alliance is known as “South Side Atlantic Drive” or “South Atlantic”. They later formed

These two are also the South Side Compton Crips, besides the Atlantic Drive Crips, are the only two CC to identify with South Side.

During the early 1970s, this area was claimed by a short-lived gang called the Burris Block Bloods, according to Once Upon A Time in Compton: From gangsta rap to gang wars…The murders of Tupac & Biggie….This is the story of two men at the center of it all, a book by former Compton Police officers Tim Brennan and Robert Ladd.

The South Side and the Atlantic Drive Crips formed an alliance with the Nutty Blocc Compton Crips, known as “Nutty South Atlantic”.

In 1996, Orlando “Baby Lane” Anderson, a member of the South Side Compton Crips, was considered a prime suspect in the LAPD/LVPD investigation of the “Las Vegas Shooting” that claimed the life of American rap superstar 2Pac (Makaveli). This controversy sparked a deadly rivalry between two of Compton’s biggest gangs; the South Side Crips and the Mob Piru Gang. Suge Knight CEO of Death Row Records was suspected of supplying the Mob Pirus with military assault rifles, along with their allies at that time the Lueders Park Pirus.

On May 29, 1998, at a car wash in Compton, Anderson and friend Michael “Lil Owl” Dorrough were involved in a drug-related shootout with Michael Stone and nephew Jerry (J-Dog) Stone, members of the Corner Pocket Crips. Anderson and both Stones were officially pronounced dead at King Drew Medical Center in Los Angeles. Dorrough was later charged with all three murders and sentenced to a triple life term in prison.

By the 2000s, the South Side Crips, were in murder fueds with a number of gangs in Compton and Long Beach.