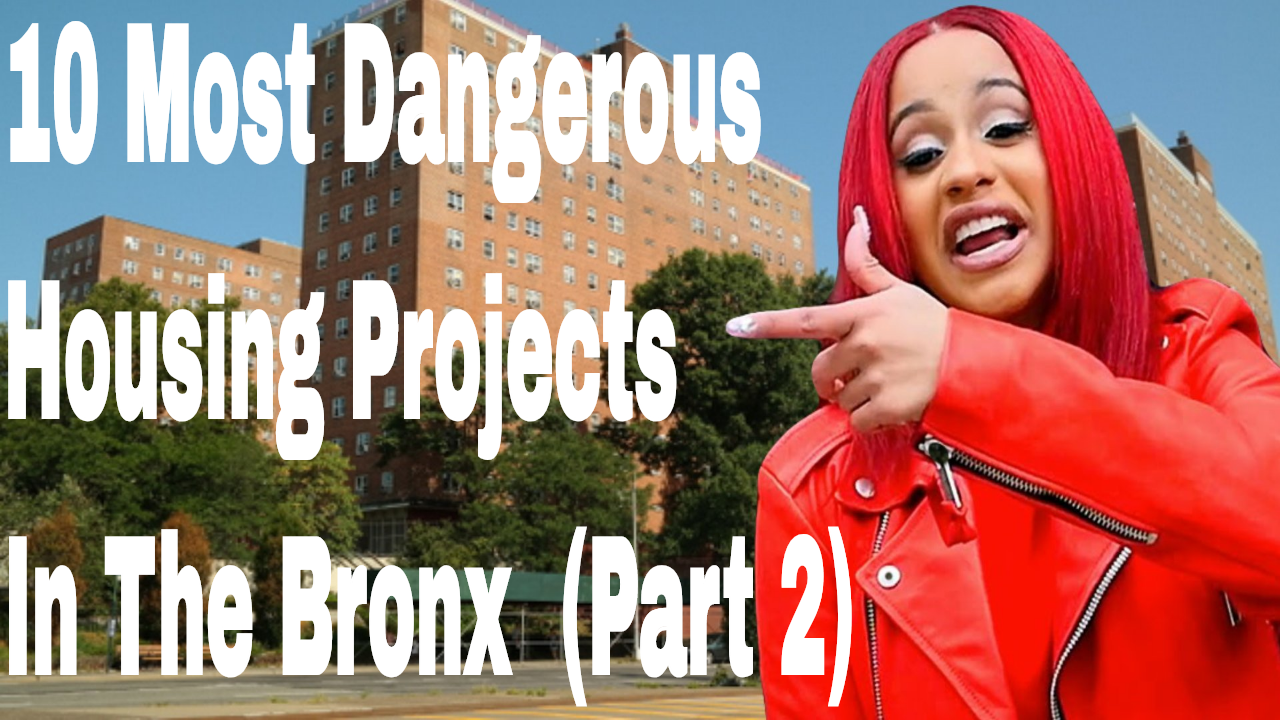 The cradle of hip-hop, the home of the New York Yankees, and the setting for many a story, the Bronx is definitely one of the best-known parts of New York City; popular among both Americans and foreigners.

Once a rural area, though, this borough has always had to deal with the sprawling crime taking place in its streets. Violence is still particularly common in poorer neighborhoods, where people resort to any kind of experience to survive.

In this article, we’ll take a look at the 10 most dangerous low-income housing projects in The Bronx and at what makes them places to avoid at all cost!

Number 10: Saint Mary’s Park Houses
Close to the gardens and park from which it takes its name, the Saint Mary’s Park project offers more than 1000 apartments to low-income families that inhabit the area. The complex sports six buildings and was made fully operational by 1960. Aside from being a large shelter for the underprivileged, its vicinity to the park also makes this location the perfect territory for a series of illicit activities.

Different kinds of crime have been reported here, with calls dating back to as early as the 2010s. According to several sources, the rising poverty of the late 1990s might have pushed some of the former tenants towards the unthinkable. Just to name a few episodes, a man was shot here in 2015; followed by another in 2016 and by several more victims in 2017. Drugs – especially ecstasy and cocaine – are also often peddled in the area.

Number 9: Moore Houses
Well known to the press for being the territory from which the so-called Murda Moore Gangstas originated, the Moore Houses are one of several city-run housing projects built by the NYCHA in Mott Haven. The complex – exceptionally small when compared to others in the area – was finished in 1964 and only includes two buildings for a total of roughly 450 apartments. The area has been riddled with crime for decades and still remains extremely dangerous.

As one would expect, the majority of this project’s criminal activities can be blamed on the aforementioned gang. The group has been accused of terrorizing the tenants, often resorting to violence and extortion to bend their will. Although multiple law enforcement organizations have dealt serious blows to the criminal enterprise, several of its members are still active in both Moore and the surrounding area.

Number 8: Boston Secor Houses
Located in the neighborhood of Eastchester – where Boston Road meets Bivona Street – the Boston Secor Houses are yet another of the smaller public housing projects put in place in the late 1960s. Perhaps built in an effort to provide the local community with more affordable accommodation, this complex offers a total of 537 apartments that are spread across four buildings.

Once a rather calm neighborhood, the area saw a rise in criminality by the turn of the century. In 2007, for example, a 5-year-old girl was found hanged in her own room; the body dangling from a wardrobe. At the time, the police suspected she might have been raped and then killed. Several years later, in 2017, 19 members of the local “slut gang” were caught with narcotics. The individuals were arrested, although the criminal group remains active.

Number 7: Morrisania Air Rights Houses
A group of three buildings erected between the Melrose and Morrisania neighborhood in the Brox, this public housing project was only finished in 1981. The designs were already there more than 10 years prior to the projects’ completion, but a series of issues prevented the work from beginning until the end of the decade. Today, the Morrisania Air Rights Houses can host up to 1950 low-income individuals.

As it is common with many of the housing projects in the Bronx area, most of the criminal activities here revolve around the unlawful use of weapons. Rival gangs, as well as private citizens, have been known to trade bullets every once in a while. In 2014, for instance, two men were shot dead following an altercation that involved several criminal groups. A similar episode also took place in 2017, when another man was killed in a gun battle.

Number 6: Webster Houses
Completed in 1965 and serving the low-income families that inhabit the western portion of the Bronx, the Webster Houses seem to possess everything they need to offer tenants a pleasant and respectable quality of life. The complex is only a few miles away from the local university and its relatively small size – about 600 apartments in total – hints at a calm neighborhood. Unfortunately, this might not quite be the case for the people living at Webster.

In the last few years, the NYCHA Webster Housing Project seems to have been hit by a series of tragedies. In August 2016, an innocent man was brutally shot as he was walking through the complex. Less than a year later, another person would lose their life here. Although the reason for this remains a mystery, a 38-year-old father from Claremont was hit in the face by six bullets that gave him no chance to escape death. Shootouts remain common in the area and local authorities suggest exercising extreme caution!

Number 5: Mott Haven Houses
Often considered a project with a twisted past, the eight buildings that make up the Mott Haven Houses have always had to share their living space with both criminality and poverty. Completed in 1965, this housing complex is located within one of the Bronx precincts with the highest rate of murders, assaults, and other violence-related bodily injuries.

Tenants who inhabit these apartments constantly report an overall lack of hope, especially when it comes to receiving much-needed help from the city of New York. Even though the area surrounding their home gradually saw its own population decreasing, crime appears to be at an all-time high. Those who decided to remain are still afraid to go out at night, more so as they realize that the police simply doesn’t have enough bodies to both maintain order and go after those who break the law!

Number 4: Mill Brook Houses
Standing within the Mott Haven neighborhood, the Mill Brook Housing Complex was originally comprised of nine 16-story buildings and saw the light of day in the 1950s. In recent years, another similar building – the revenue of which was to pay for renovation of the entire area – was added in place of a parking lot. Only later would the tenants be informed of the failure of this entire fund-gathering operation.

Poor living conditions, the need to make end meets and a distinct lack of alternatives often drive people from this and similar neighborhoods towards the world of crime. In the last 10 years, for example, authorities discovered multiple drugs trafficking operations and the presence of several gangs within the complex. More generic violence, as well as petty crimes and minor misdemeanors have also become a part of this community’s daily life.

Number 3: McKinley Houses
One of the most recent low- and medium-income tenements in New York, the McKinley Houses were only completed in 1962; making them 12 years younger than the city average. Regardless of that, the structure is often listed as one of the worst complexes under the control of the NYCHA, with tenants lamenting poor living conditions, widespread violence, and an almost complete lack of community policing.

Those who’ve lived here share upsetting stories, at the same time trying to dissuade anyone with children from applying for an apartment in the area. Several incidents have happened at McKinley Houses in the last few years, including the murder of a 24-year-old man in 2017, when the victim was shot dead in one of the hallways. A former teacher who worked at the local school also reported several confrontations. Most of them – they said – appeared to be somehow connected to the presence of criminal gangs.

Number 2: Eastchester Gardens
Located in what’s a predominantly working-class neighborhood, the 10 buildings that make up the Eastchester Gardens Housing Project were designed immediately after World War II. The site was completed in 1950 and could – at the time – take in 876 families. Unfortunately, over the next few years, the location would become prime real estate for both criminal gangs and illicit activities.

Throughout the 70s and up until the early 2000s, African-American and Latino gangs would often fight for control of the project and its surrounding territory. This eventually sparked a reaction from NYPD, which culminated in a massive raid that took down more than 120 gang members between 2016 and 2017. Nevertheless, the area remains a highly volatile power-keg. It’s not uncommon to hear sporadic gunfire and other forms of violence have quickly become the norm for the residents.

Number 1: Forest Houses
Also known as Morrisania, the Forest Housing Project is a group of fifteen buildings that were completed by the NYCHA in 1956. The complex features about 1350 apartments, although the total number of people living in it is somehow unknown. Among the others, American rapper and actor Joseph “Fat Joe” Cartagena also spent his childhood and a good part of his early teens here.

As with many other housing initiatives around the city of New York, the tenants who rent at Morrisania have to deal with a large number of setbacks. Poor maintenance, incompetent staff, the inability to get help, inhumane living conditions, and a general lack of purpose seem to remain the most troubling issues for the project’s inhabitants. This often results in violence, with murder and assault being the most common forms of it. The Forest Houses have also been a fertile land for car thieves and burglars, as well as a favorite location for pickpockets.

Have you ever had the chance to walk through some of these locations? Know some stories or first-hand testimonies about the life in a public housing complex?