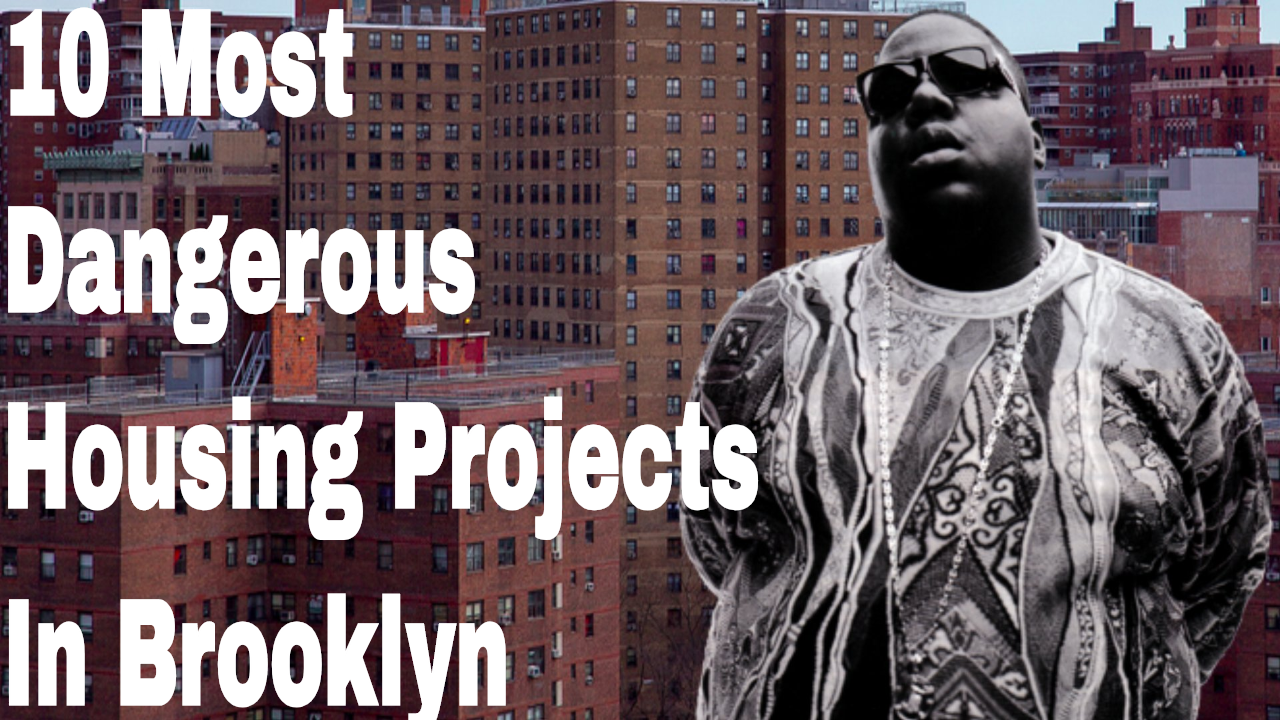 Brooklyn is the cultural heart of New York. Its Dutch history, the peculiar accent, and the many celebrities that grew up here made this borough extremely popular among both locals and tourists. It is an international melting pot, where different populations have gradually learned to live and thrive together.

Still, the most populous part of the city also holds a much darker secret. Within its stacked apartments and the tall buildings live hundreds of thousands of low-income families. They are often herded in state-provided houses, where crime and violence tend to thrive. In the next few lines, we’ll take a look at the 10 most dangerous housing projects in the borough of Brooklyn!

Number 10: Bushwick Houses
Arguably less popular than other items on this list, the Bushwick Housing Project in central Brooklyn definitely shoots to the top when it comes to shoddy living conditions. The 8 buildings that make up this complex were built in the 1960s and soon left to their own devices. “Nothing but the downtrodden live here” says a former tenant, adding that this is a “terrible place to live and raise children”.

Local newspapers and official crime records seem to agree with the man’s account of the situation. Bushwick is tainted by mold and rust, with cracked walls and paint that easily peels off. Violence is also at an all-time high, as criminals of all races and faiths fight for the desolated remains of what once might have been a decent low-income neighborhood.

Number 9: Walt Whitman Houses
Completed in 1944, the Walt Whitman Housing Project can host up to 4000 of the low and medium-income inhabitants of Fort Greene in northwestern Brooklyn. Aside from what has been published by newspapers and reporters, little is known of the complex’s history or of its original purpose. Residents often describe it as a dangerous place to live at, with some suggesting to stay away from its hallways and playgrounds unless you’ve been invited or know somebody that lives there.

These accounts would roughly match those published by the police. Throughout the years, the tenants at Walt Whitman houses have seen murders, robberies, assaults, and plenty of organized crime. When, in 2016, a 13-year-old boy was beaten, kicked, and subsequently robbed by six people in broad daylight – for instance – it became clear exactly how dangerous this housing complex can be for just about anybody!

Number 8: Gowanus Houses
Built alongside others in the 1940s, the Gowanus Houses are one of the several NYCHA housing projects that litter the neighborhood of which they bear the name. Featuring a community center that was recently reopened as well as a rather active art collective, this housing complex might look like a peaceful and pleasant location to raise one’s children. First looks can often deceive us, though!

Ever since its completion, the Gowanus Houses have been a fertile ground for both petty and organized crime. In 2014, even the most prominent gang leaders would often wear a bulletproof vest when venturing outside their dens. The killing of a 19-year-old man in 2017 and discontent with the apartments’ current condition pressured the tenants to petition the city for help, although a plan for the re-qualification of this area is yet to be drawn and approved.

Number 7: Glenwood Houses
Built between 1949 and 1952, the Glenwood Housing Project features 20 buildings that put a roof over the head of more than 2700 low and mid-income individuals. The entire complex is located in the Flatlands – in south-east Brooklyn – and has been the home of several prominent people, including the Domińczyk sisters as well as music executive Neil Bogart.

Although this might sound as a secluded and rater safe environment, the Glenwood Houses saw their fair share of crime throughout the years. On April 28th, 2010, for instance, two murders were committed on the premises in less than 24 hours. Five years later, in 2015, a shootout that started during a BBQ left two people on the ground and many more injured. The sound of gunfire and the melancholic lamentations of vigils seem to have become the norm in Glenwood.

Number 6: Breukelen Houses
Named after the word for the Dutch settlement that would, in time, become the modern borough of Brooklyn, the Breukelen Housing Projects are located in the neighborhood of Canarsie. Following a city and nationwide post-World War II housing shortage, the council first planned the development of this site in 1949. The complex was finished on October 31st, 1952, with the first tenants moving in shortly afterwards.

In recent years Breukelen houses received substantial upgrades from the city of New York, including new fences, security systems, and cameras. Major Di Blasio also promised his administration would address the various issues that plight its inhabitants. Nevertheless, tensions remain high in the neighborhood, with occasional shootings, petty crimes, and gang wars forcing the tenants to keep their eyes peeled for any signs of danger.

Number 5: Boulevard Houses
Located at 785 Schenck Avenue, the Boulevard Houses are yet another of the housing projects the City of New York built for low-income families in the last 50 years. According to its official description, the complex features 1424 apartments and was completed in March, 1951. Although the statement is hard to prove, the project was allegedly financed and subsequently designed to reduce overpopulation in the area.

Albeit its inhabitants would describe them as quiet, the Boulevard Houses have a long-standing tradition of crime and violence. Shootings, both between rival gangs as well as between suspects and the police, are often reported in the area. In 2014, after an innocent man was shot dead in a stairwell, 500,000$ was spent to install cameras in all the buildings. Unfortunately, this did little to ameliorate the situation, with tenants still living in fear!

Number 4: Langston Hughes Houses
Located in the infamous neighborhood of Brownsville, in East Brooklyn, the Langston Hughes houses are one of the several projects built to give shelter to the increasing African-American and Latino population that poured into the city between the 1950s and 1960s. One of the poorest areas of the state, Brownsville has been consistently seen as the murder capital of the entire New York; a title that these streets seem to easily live up to.

Crime in Langston Hughes doesn’t stop with murder, though, and doesn’t have a minimum age limit. Especially among the youngest of its inhabitants, fraud and petty violence seem to be the preferred paths to follow. From kids trading blows – and sometimes bullets – in the courtyards to teenagers scamming banks with fake checks, this housing complex is definitely feeling the consequences of the continuous neglect by local authorities.

Number 3: Marlboro Houses
A decadent set of 24 buildings, which first saw the light of day in the mid-50s, the Marlboro Houses are mainly known for their horrifying living conditions. Tenants often report structural damage, leaking pipes, the presence of infesting critters, and the lack of basic services. In 2013, this complex was considered one of the worst in the whole of NY. The city took an average of 250 days to intervene whenever tenants required much-needed maintenance.

Consequently, the area surrounding the Marlboro Houses has been the stage for some serious crime. As early as 1985, local newspapers report shootouts, muggings, and assaults. Racism has also been – and partially still is – an issue, while black and white gangs continue to fight for control of the territory.

Number 2: Farragut Houses
Another of the city of New York’s solutions to the rise in population that followed World War II, the Farragut Housing Projects – located in Downtown Brooklyn – were completed between 1951 and 1952. The structure is comprised of 10 buildings, designed to house more than 5000 people. Today, following various arrests and as more families decide to try their luck elsewhere, the complex’s total population is a tad less than 3275.

As it is common with state-run housing facilities, crime remains a major issue at Farragut. Since the 1990s, the NYPD and other law enforcement agencies have begun working in the area, slowly cleaning up the streets and reducing the number of felonies committed by its inhabitants. Cameras and other surveillance equipment were also installed in 2014. Nevertheless, the Farragut Houses remain a highly dangerous environment that should be avoided at all costs!

Number 1: Lafayette Gardens
Built in the early fifties as a quick solution to the sprawling overpopulation of the city’s suburbs and named after the French-born revolutionary general, the Lafayette Gardens housing project is located between Dekalb and Lafayette Avenues, in north-west Brooklyn. Well known to both local media and the community, this neighborhood had to deal with decay and crime for the best part of the last 60 years.

Alongside the many low-income families, the Lafayette Gardens are also inhabited by members of the predominantly black Cash Money Gang. The group made the headlines multiple times in the last decade, when some of its affiliates were repeatedly charged with peddling drugs, resorting to violence to settle internal disputes, and spreading terror among the population. Arrests have subsequently been made, but the criminal association still seems to be actively controlling the area.

This was our list of the 10 housing projects in Brooklyn that you should steer clear of!
Have you ever had the chance to walk through some of these locations? Know some stories or first-hand testimonies about the life in a public housing complex?