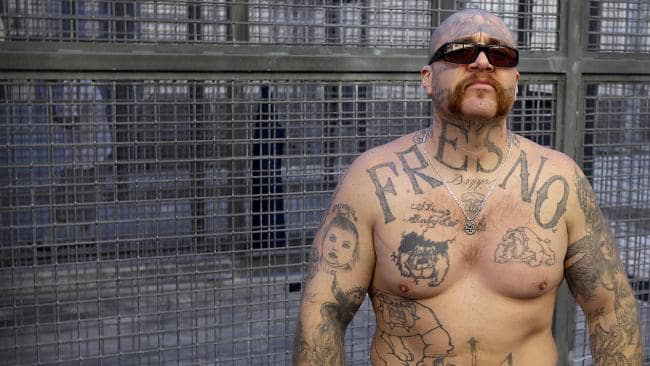 The Mexican Mafia is a gang that was formed in 1957 by 13 Hispanic street gang members. This gang is also commonly known as La eMe which means ‘the M’ in Spanish. M is the 13th letter of the alphabet and to this end, this became the iconic symbol of the gang and their affiliates.

This gang was formed within the California prison system with several purposes. The members were looking to control all the criminal activities within the correctional facility and beyond. In addition, the organized gang was supposed to protect members from existing gangs within the prison system. The activities of the Mexican Mafia were carried out through intimidation, fear and violence.

In turn, the top members would enjoy a flow of income, protection, and comfort while at the correctional facility. By 1992, the Mexican Mafia was looking to and expand its reach. In this respect, the gang sent out an order to all the Latino street gangs in Southern California. The gangs were required to pay a fee or a tribute in solidarity with the criminal activities of the larger ‘mother’ gang.

The Mexican Mafia had managed to penetrate the drug trade while positioning itself as a formidable high-level gang. Their knack for violence was unmistakable. Therefore, many street gangs out of adoration and fear alike obliged to the order. However, not all street gangs were convinced and were defiant in paying a tribute to the Mexican Mafia. MS 13 cliques, for example, insisted that their drug money was theirs, and sharing the revenue with La eMe was out of the question. The Mexican Mafia was known for its brutality, threats, and intimidation, many Latino street gangs had no choice but to pay. However, for those who went on to defy the edict, a bitter end would await them. The defiant were placed on a hit-list called the ‘green light’.

At this juncture, war had been declared and great animosity among gangs would find a foothold for a very long time. Rebel gangs would pay with blood and this initiated a bloody cycle where revenge attacks would see all sides lose their members through brutal street killings. In no particular order, here are the gangs who defied the Mexican Mafia.

This gang originated in East Los Angeles and had initially contributed many members to the Mexican Mafia. However, they chose not to obey the edict from La eMe therefore not paying any taxes. This meant that they were happy to go at it alone in their criminal activity. In addition, they would create many enemies as a result. This gang organized itself to protect its members in prison from the Mexican Mafia soldiers. A Maravilla gang member in 2008 shot dead a person who supported the Sureno gangs as he waited at a bus stop. At the scene of murder, the shooter intimidated a witness by flashing a hand gang sign.

This gang was composed of mainly Hispanic members from northeast Los Angeles. They defied the Mexican Mafia in 1993, when they chose to reject affiliation and loyalty to the gang. At the time, other East L.A gangs were coming under the authority of La eMe; notably Boyle Heights and San Gabriel Valley street gangs. Of course, owing to their defiance, the Lowell Street Locos were placed on the La eMe hit-list. Being ‘green-lighted’ by the Mexican Mafia meant that all affiliate gangs would become hostile to them; both in prison and out of prison.

The Lowell gang was however willing to take the risk of being targeted. They went a step further to target Le eMe members. For example, they shot dead a vital member of La eMe in 1995. In fact, Lowell started using the term ‘Green Light Gang’ to acknowledge they were targets and were not shaken by it.

This gang is mainly composed of black members or African Americans. It is said that the gang once robbed a La eMe affiliate of a large consignment of dope. Since the heist, the gang has been a major rival to the Mexican Mafia and their affiliates. The East Coast Crips also enjoy a large following with over 2,500 members and an array of subsets to be found all over the South Los Angeles area. In 1996, a Sureno member was shot dead by a subsect group member of the East Coast Crips called the Six Pack Crips. Over the years, tensions between the two main rivals were on the rise and in 2004, A Mexican Mafia affiliate leader ordered a ‘cleansing’ of the black gangs. The F13 leader sent this word from the Pelican Bay State Prison. This only added salt to the injury and the rivalry continues.

This gang was mainly based in the Boyle Heights in Los Angeles. This gang was mostly composed of Mexican -Americans and they stood their ground not to pay any tribute to the Mexican Mafia. They fought to control their revenue from criminal activity while openly declaring war against all the Sureno gangs. Sureno or southern gangs are those with close affiliation to La eMe.

This is one of the most daring gangs that chose to defy La eMe. This gang had a varied composition and was mainly made of an affiliation of Northern California inmates; with some support from Southern California gangs who did not see eye to eye with the Mexican Mafia. This rival gang was formed on the exercise yard at San Quentin in the 1960s. Nuestra Familia and La eMe have over 30 years of bitter rivalry which has resulted in the bloodiest battles in the history of organized crime in California. This rivalry was responsible for more than 600 murders of members from both sides. Authorities were always prepared for the bloody confrontation that would ensue between the rivals in the prison system.

Indeed, this rivalry by gangs has escalated with law enforcement trying to crack down on illegal activity. Some gangs are now working undercover while others regrouping in a bid to remain relevant in the gang world. All in all, the Mexican Mafia continues to send shivers down the spines of many rivals even as the long arm of the law continues to stretch.