Two Oceanside gangsters will make one more appearance in a San Diego courtroom this month, on February 24, before they spend the rest of their lives in state prison, officials say.

Near the site of the stabbing

In the summer of 2013, the body of Louigie Bermas, 21, was found in the street by Oceanside police. Bermas had been beaten, strangled, and stabbed before he was dumped in the 600 block of Arthur Avenue, according to police. A companion who had been with Bermas that same night, on August 14, 2013, was also stabbed, but he escaped and was later able to testify.

The survivor reportedly belonged to a gang from Fallbrook and had invaded rival gang territory to spend time with a female; the woman lived in Oceanside. 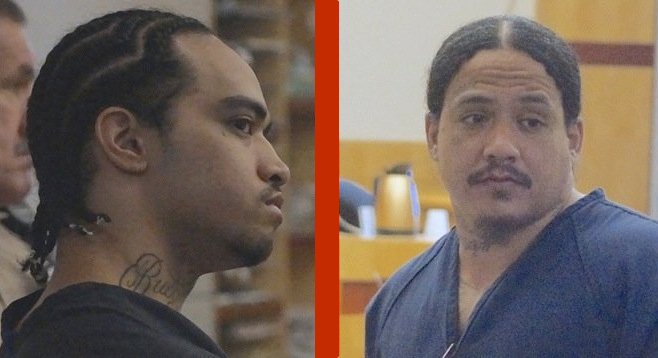 She testified that she also liked to spend time with David Lemoe Tua.

Convicted murderers Seau and Tua are both members of the Bloods gang, according to prosecutor Jon Oliphant. Photos of their alleged gang tattoos were displayed as evidence in court. In Oceanside, the Bloods gang is mostly made up of Samoans, and they also go by the names Deep Valley Bloods or West Side DVB, experts testified.

Bermas, was not known to be in any gang, but the prosecutor asserted that because he was in the company of a rival gang member and was wearing the color blue that night, he was offensive to Seau and Tua. Members of the Bloods gang are said to display the color red.

Tua and Seau are expected to make an appearance before judge Richard Monroy the morning of February 24, in San Diego’s North County Superior Courthouse in Vista.