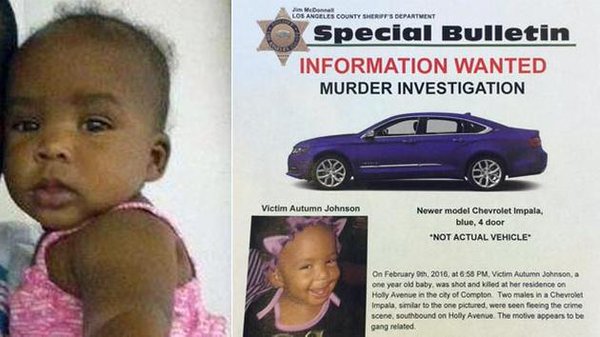 Hundreds took part in a march in Compton Sunday to call for an end to gang violence and help in finding the culprit behind the shooting death of Autumn Johnson, a 1-year-old girl.

Autumn was shot in the head in her crib and killed Feb. 9.

Her father has allegedly admitted to detectives that he is a gang member and believes he was the target when shots pierced his home and killed his daughter.

The march had participants walking from Lueders Park to City Hall.

“Back in the days, if you were a gang member, the gang members shot you. But the families from the days of the mafia were always off limits. It’s not the case now,” said Bishop L.J. Guillory of Ombudsman International.

Some of the people who marched say they’ve lost a child or brother or sister to gang violence.

That is why Wandick hopes the person responsible will come forward and has this message to anyone who might know who the killer is and is afraid of being called a “snitch.”

“It ain’t about being a snitch. It’s about, where’s your soul?”

A $75,000 reward has been offered for information leading to the arrest and conviction of Autumn’s killer.