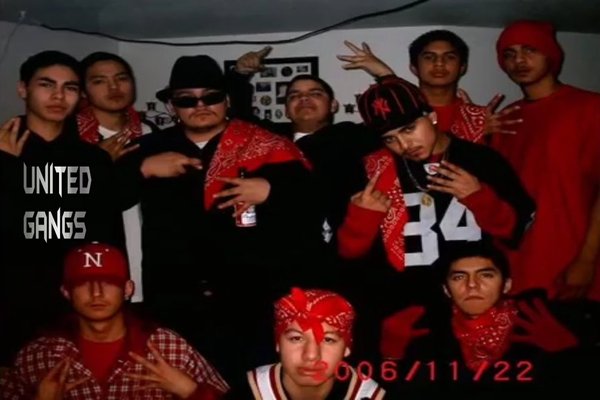 Norteños (Spanish: for Northerners), or Norteñas for females, is a coalition of Mexican street gangs who pay tribute to Nuestra Familia (Our Family). Norteños identify with the color red; the number 14 (“XIV/ X4), which signifies N, the 14th letter of the alphabet; and the huelga bird.

Foundation and Early History
In the early 1960s, an increase in the number of Mexican individuals moving to California resulted, among other things, in larger groups of Hispanic inmates flowing to the various correctional facilities scattered throughout the state.

As the decade went by, prisoners would start to split into smaller groups, based on the location of their original hometowns. Often in a state of rivalry, these mobs were the protagonists in several episodes of prison violence; their differences in background, customs, and allegiance being the main reason behind such outbursts.

By 1968, most of the Mexican population in the California Prison System had sworn loyalty to one of two main groups. The Norteños (meaning Northerners) and the Sureños (Southerners) thus came into existence; with affiliation based, once again, on the geographical origin of each member.

Independence From The Mexican Mafia and Nuestra Familia
While pride certainly played a major role in the creation of the aforementioned two groups, one of the main reasons behind the birth of the Norteños was their growing desire for independence from La eMe, the Mexican Mafia.

Members from this criminal organization had, throughout the 60s and the 70s, treated northerners with disrespect, often referring to them as uneducated lame farmers. A good number of clashes had also been registered, both within prison walls and in the cities.

It is, allegedly, one of these episodes that resulted in what criminal analysts consider the bloodiest conflict in the history of Californian gangs. When a member of La eMe stole a pair of shoes from a northerner, the group retaliated by completely abandoning the Mexican Mafia in 1968 and founding the Nuestra Familia, an alliance of several gangs that operated both inside and outside of the prison system.

Current Criminal Activities and Operation Black Widow
Little is known of the gang throughout the 80s and the 90s. Although several law enforcement agencies repeatedly attempted to infiltrate their ranks and collect information, the structure of the Norteños and the fact that the group operates primarily within correctional facilities rendered most of these attempts fruitless efforts.

It was only around the year 2000 that federal agencies stepped up their investigations, eventually managing to gain ground on the gang and execute the so-called Operation Black Widow. The largest investigation into both the Norteños and Nuestra Familia, this operation was characterized by more than 20 arrests. The defendants, among whom several high-ranking members of both groups could be found, were responsible for 600+ murders.

Although Black Widow severely crippled the Norteños ability to operate within California, the gang remains one the most active in the area. Today, members of the Norteños mostly deal in drug trafficking, racketeering, extortion, and murder; with prostitution, and the sale of guns also being a solid source for funds.