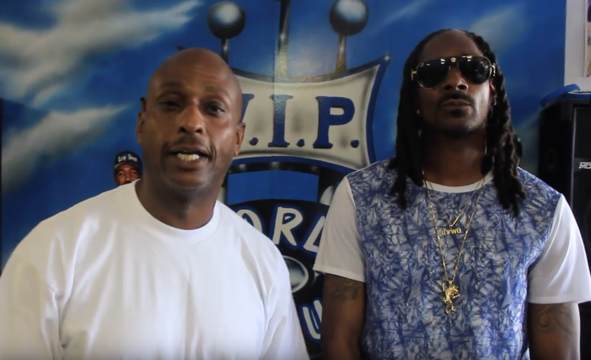 Snoop Dogg is being called out again by Big Flossy, a second-generation member of the Rollin 20s Crips for disrespecting Long Beach and rapping about a life he never lived.

“He got the nerve to go with The Game up to the LA Police Department like he speaking for all crips and then went down there in July, with a Pendleton looking like CB4.”

In 2015, big Flossy originally called out Snoop on Facebook, for not helping the Long Beach Community. Which Sparked rumors of Snoop Dogg being banned  from Long Beach, by the Rollin 20s Crips.

In 2016, Big Flossy broke-down his frustration with Snoop, in an interview with J-Mix of Tupacnation.net. His bitterness stem from the rapper not honoring their agreement of starting non-profit organizations in Long Beach, to help the youth.

He also criticized Snoop for passing out leftover turkeys  —from Inglewod— during a Turkey drive held last year in Long Beach.

Flossy explained his frustration with Snoop exploiting the community and the Rollin 20s for record sells. He alleges Snoop didn’t start banging until the Death Row era, during the 1990s.

Snoop has influence over youngsters from Rollin 20s Crips and the Insane Crips. The two largest African-American street gangs in Long Beach, who are mortal enemies. Snoop has a platform but refuses to use it to stop the bloodshed between the two warring gangs, according to Flossy.