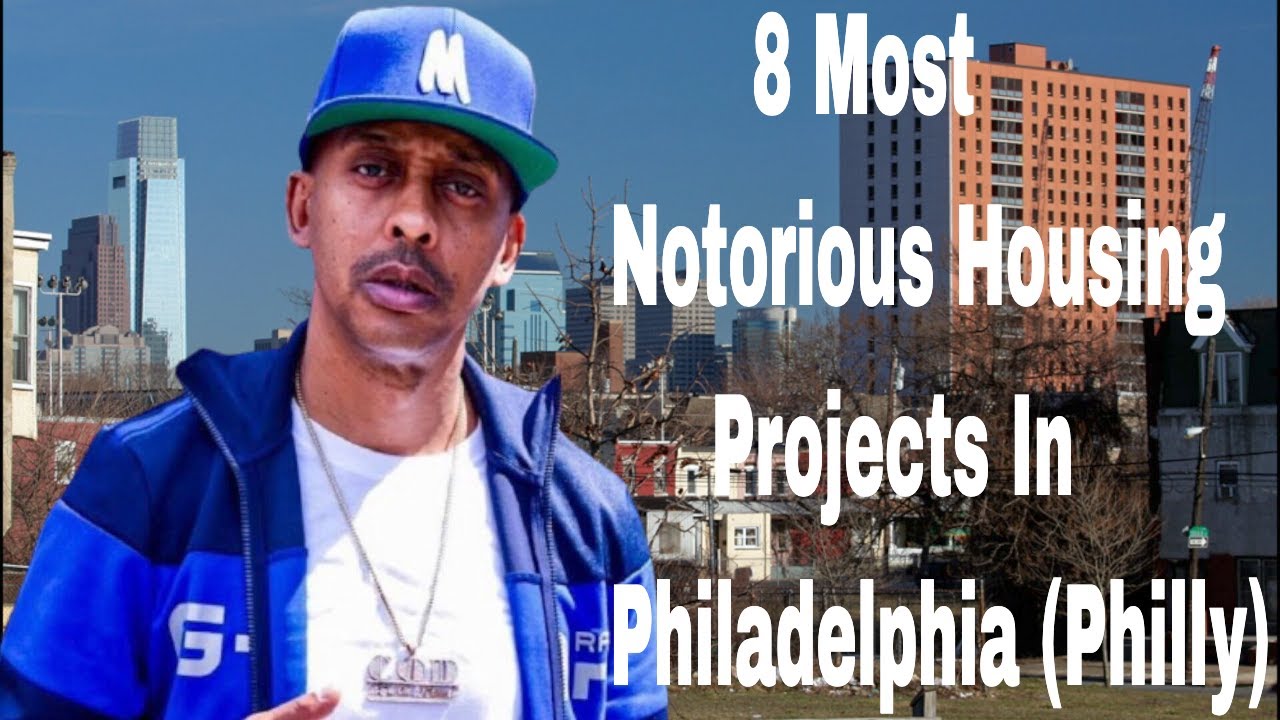 The 8 Most Dangerous Housing Projects In Philadelphia

For most people, Philadelphia is a rich, multicultural, and bustling city; the birthplace of the United States Marines Corps and of the world-famous Philly Cheesesteak. But the former capital of Pennsylvania is also one of the oldest settlements in the US and was the prime destination for minorities, including Hispanics and African Americans, during the period known as the Great Migration.

The sudden influx of poor families, which doubled Philadelphia’s population in the first part of the 1900s, led the government to build a series of housing projects – low-income apartments scattered throughout the city. These would soon become infested with crime, as their inhabitants had to struggle with poor living conditions and were often forced to break the law in order to survive.

Today, we take a tour through some of Philadelphia’s worst neighborhoods and explore 8 housing complexes that you should do your best to avoid if you’re ever visiting the city!

Named after the West Philadelphia neighborhood in which they were located, the Mill Creek Apartments were a series of public-housing units constructed between the 1950s and the 1960s. Due to their location, the projects had been experiencing problems from the start. Several apartments had already collapsed in 1961 and, by the end of the decade, much of the entire complex was in shambles.

Aside from their architectural issues, the Mill Creek Apartments are primarily known as the site of the Lex Street Massacre – the biggest mass murder in Philadelphia’s history. In December 2000, a car sale gone wrong led to a confrontation in one of the complex’s crack houses. When the two parties couldn’t agree on a solution, four men began shooting. The attackers left seven people dead and gravely injured another three.

The Mill Creek Apartments have been demolished in 2002 and replaced with a series of low-rise houses. Nevertheless, drug-trafficking continues to plague this part of the city and the occasional gunshot can be heard in the distance while walking through the neighborhood.

Have you ever had the chance to walk through some of these locations? Know some stories or first-hand testimonies about life in a public housing complex?

Another of the architectural monstrosities built by the Philadelphia Housing Authority in the late 50s, the Mantua Hall Projects were located on Fairmount Avenue, in one of the segregated neighborhoods of West Philly. The 18-story building, which was hailed as a modernist marvel when it first opened in 1961, contained 153 units that could house about 500 people.

Within its first 15 years, the building had already fallen prey to a severe lack of maintenance. Pictures published, for example in local newspapers showed dilapidated hallways. At the same time, neighborhoods began to notice plaster falling from the walls, faulty electrical systems, and sewage drains that would leak into the units’ bathrooms.

By the end of the 20th century, crime had also become rampant in the area. Drug dealers would often take over the complex’s elevators, terrorize some of the tenants, and occasionally fire weapons in the hallways. The Mantua Hall Projects have been undergoing renovations since 2008 but even this partial reconstruction effort did little to ameliorate the situation.

Built in the 1960s and eventually dedicated to the memory of black-rights activist Martin Luther King, these projects in south-east Philadelphia consisted of several high-rise buildings. The units, which featured the unmistakable aesthetics of public housing, were primarily intended for African-Americans and other minorities who struggled with finding employment.

For most of its existence, the area around Martin Luther King Jr Plaza was plagued with crime. Former residents attest to often seeing small blue packets, likely containing drugs, scattered throughout the yards. Assaults and violence were also common in the complex. As a result, by the late 1990s, most of the units were either vacant or outright unlivable.

The projects were partially demolished in 1999 and replaced with a series of smaller townhouses. Crime in the area seems to be decreasing but drug-trafficking and the occasional gang fight still remain a problem for the residents.

While most housing projects in Philadelphia were built to cater to the growing African-American community, the birth of Bartram Village units in the Southwest part of the city is a rather unique story. The complex was completed in 1942 and was intended for white families who needed an affordable home during the Second World War.

When the conflict ended and segregation came into effect throughout the United States, Bartram Village quickly transformed into a predominantly black neighborhood. Almost immediately, living conditions deteriorated and violence erupted in the hallways. Furthermore, in the late 1990s, the area also became the headquarters for a gang of drug dealers known as the Harlem Boys.

Crime at Bartram village remained a constant even as the world headed into the 21st century. In 2010, for example, several members of the Harlem Boys were arrested when police dismantled a local drug-trafficking ring. And in 2018, police found the mangled remains of a woman hidden in a suitcase at one of the village’s trash collection centers.

When they were finally inaugurated in the late 1960s, the Blumberg Towers in Northern Philadelphia sounded like the perfect housing solution for low and mid-income families. Fliers and commercials described a heavenly neighborhood, the inhabitants of which worked together to secure a better future for their children.

But the truth was far from the pretty pictures that prospective residents were shown when they visited the Housing Authority Offices. Former tenants still vividly remember urine-stained hallways, constant shootouts in the yards, and a small army of heroin addicts that would stagger from one building to the next while looking for a fix. The Blumberg Towers project had become a hellhole and had shown just how flawed the idea of public housing could be.

The complex, which had already started to fall apart in the 1990s, was eventually demolished in 2016. While a new neighborhood is currently being constructed in its place, those who grew up at Blumberg can’t shake the feeling that history will simply repeat itself.

Built-in the late 1940s to house both World War II veterans and families who moved to Philadelphia in hopes to find better-paying jobs, the Raymond Rosen Homes were a series of racially segregated, low-income apartments in Northern Philly. The complex, which featured 1122 units, was first inaugurated in 1954.

When the first tenants moved in, the Raymond Rosen Homes offered both low- and high-rise apartments surrounded by a rather pleasant neighborhood. Accounts from the 1960s spoke of a lively community that often organized events, helped each other, and took great care of the common areas. The situation, however, quickly worsened as the years went by. By the 1990s, the housing complex had already become little more than a slum.

Although the Raymond Rosen Homes were eventually demolished in 1995, the area remains extremely dangerous. Multiple shootings were reported at the former projects over the last year alone, including a gang-related drive-by which left three teenagers in critical conditions.

One of the oldest housing projects in South Philly and another child of the Housing Act, the Tasker Homes were also built in the late 1930s. Although the 1077 homes, which would be completed in 1942, were primarily intended for low-income African-American families, the complex also housed a good number of white Philadelphians for most of its existence.

Just like its sister project in the northern part of the city, Tasker Homes soon became a hotspot for violent crimes and racial segregation. According to a survey, between the 1940s and the 1980s, more than 30% of the people living in this neighborhood were below 18 years of age. In the 1980s and 1990s, robberies, assaults, batteries, and drug-trafficking were a common sight throughout most of the housing units.

After years of violence and despite the efforts of its community, the Tasker Homes housing project would eventually be demolished in 2004. It has since been replaced by a series of low-density public housing complexes known as the Grays Ferry Estates.

Located in lower North Philadelphia, the Richard Allen Homes were originally built following the Housing Act of 1937. According to some sources, the Philadelphia Housing Authority chose to raze three blocks of a pre-existing, dilapidated neighborhood in order to start the project. This displaced several thousand low-income families that already inhabited the area.

When it was eventually completed in 1941, the Richard Allen project was a showpiece; a testament to what government-sponsored renovation could lead to. Families, including that of now-disgraced actor and comedian Bill Cosby, began to move into the brand-new housing units right away. Over the following four decades, however, the situation slowly turned for the worse.

By the 1980s, the Richard Allen Homes were in a state of disarray. Tenants feared the gangs of pushers that had taken over some parts of the village, had to deal with malfunctioning pipes that would often spew sewage right onto their floors and experienced blackouts that usually lasted for more than 48 hours.

In the early 2000s, the government decided to start a renovation initiative for the entire area. The living conditions at Richard Allen have since improved but the place remains one of the city’s most dangerous neighborhoods.

This was our list of the 8 most dangerous housing projects in Philadelphia!

Have you ever had a chance to walk through some of these locations? Know some stories or first-hand testimonies about life in a public housing complex?