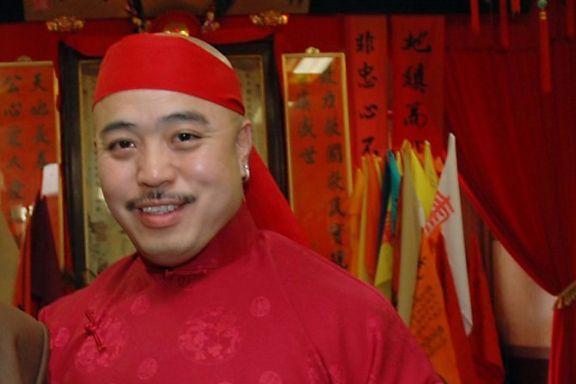 A prosecutor told a federal judge in San Francisco Monday he has evidence that Chinatown fraternal association leader Raymond “Shrimp Boy” Chow solicited the murder of the leader who preceded him.

Chow, 55, the chief or “dragonhead” of the Chee Kung Tong, is due to go on trial Nov. 2 in the court of U.S. District Judge Charles Breyer on charges of racketeering conspiracy, money laundering and conspiring to receive and transport stolen goods.

Chow has not been charged with the murder of the previous dragonhead, Allen Leung, 56, who was killed by a masked gunman at his import-export business office in San Francisco on Feb. 27, 2006.
But prosecutors want to introduce evidence of Chow’s alleged link to the slaying as part of the evidence that Chow engaged in racketeering, or operating an ongoing organized-crime enterprise. Chow became the association’s leader six months after Leung’s death.
Prosecutors previously claimed that Leung told the FBI Chow had threatened him and that the murder was “inextricably intertwined” with Chow’s rise to power in the group. But they had not claimed direct evidence of a link.
Today, however, Assistant U.S. Attorney Ralph Frentzen told Breyer, “We have just recently been able to link the defendant to soliciting that murder.
“You have a situation in which the defendant’s rise to take over the CKT occurred exactly in the context of his predecessor being murdered,” Frentzen said.

Chow’s lawyer, Curtis Briggs, argued that it would be unfair to permit evidence of an alleged link without a formal murder charge.

“If there is a murder being charged, let’s charge it,” Briggs said.

U.S. Attorney’s Office spokesman Abraham Simmons declined to comment on whether prosecutors are considering seeking a grand jury indictment that would add a murder charge against Chow.

Breyer ordered Frentzen to file a brief describing the alleged evidence and said he will rule later on whether the evidentiary value of the alleged information outweighs the risk of prejudicing the jury.

“A homicide is a very prejudicial thing,” Bryer commented.

Outside of court, Briggs called the prosecution’s murder claim “a farce,” and said, “It’s like pulling a rabbit out of a hat.”

Prosecutors also want to introduce evidence for a claim that Chow was connected with a second murder, that of former associate Jim Tat Kong, 51, of San Pablo, who was shot in the head in his car in Mendocino County in 2013.

Frentzen said today he has recordings in which Chow allegedly said he was withdrawing his protection of Kong as well as recently obtained alleged “direct evidence he did solicit someone to carry out the murder.”

But Frentzen said Kong’s murder was committed by someone else and not by the person whom Chow allegedly solicited.

Breyer will rule later on several other pretrial matters, including a defense bid to have the identities of FBI undercover agents who investigated the case revealed.

Yee, Jackson and nine other people have pleaded guilty to various charges.

Chow’s trial is currently scheduled to have jury selection Oct. 19-21 and opening statements on Nov. 2.

But if Chow’s lead lawyer, veteran defense attorney Tony Serra, is not available for jury selection on the October dates, the jury selection will be postponed to Nov. 2, Breyer said today. Serra is currently representing a murder defendant in a Yolo County Superior Court trial that is taking longer than originally expected.