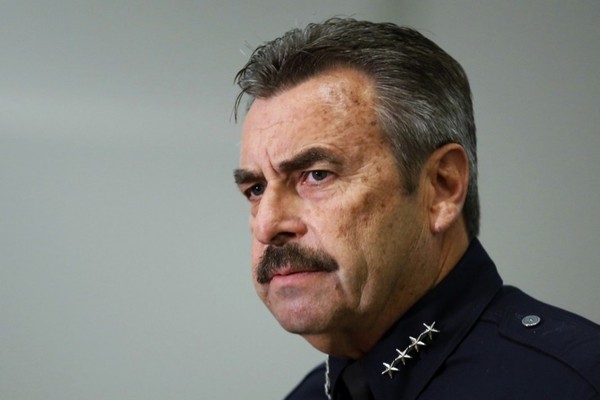 Donald Trump has pledged to begin deporting millions of undocumented immigrants as soon as he takes office next year.

For now, Los Angeles Police Chief Charlie Beck has no plans to help him do it.

“We’re going to maintain the same posture we always have,” Beck told KNX 1070 Monday. “We don’t make detentions or arrests based solely on status, whether that’s immigration status or any other status.”

“If the federal government takes a more aggressive role on deportation, then they’ll have to do that on their own,” he continued.

Beck called any effort to arrest and deport people a “monumental task” and estimated that there are 500,000 undocumented residents in the city of Los Angeles alone.

“This is a population we police by creating partnerships, not by targeting them because of their immigration status,” he added.

Since the earliest days of his presidential campaign, Trump has made immigration enforcement a central pillar of his controversial message to voters. He has promised to build a massive wall along the U.S.-Mexico border, labeled undocumented immigrants “rapists” and pledged to aggressively deport millions of people.

In an interview that aired Sunday, the president-elect told “60 Minutes” correspondent Lesley Stahl that he would deport 2 million to 3 million undocumented immigrants who “have criminal records.”

“What we are going to do is get the people that are criminal and have criminal records, gang members, drug dealers, we have a lot of these people, probably 2 million, it could be even 3 million, we are getting them out of our country or we are going to incarcerate,” he said.

According to the Washington Post Fact Checker, Trump likely gets these estimates from a Department of Homeland Security fiscal 2013 report saying there were 1.9 million “removable criminal aliens.” However, that figure includes undocumented immigrants and people who are lawful permanent residents, or those who have temporary visas.

As for how many of those people are illegally present noncitizens, there are conflicting figures from the think tank Migration Policy Institute and the Center for Immigration Studies. In a fact check, The Post rated Trump’s figures “Two Pinocchios,” noting that federal immigration enforcement data is “not always transparent or reliable.”
//www.washingtonpost.com/video/c/embed/ee70a970-aa62-11e6-8f19-21a1c65d2043

If there was one location in the United States in which Trump could make the largest dent in the country’s undocumented population, it would be sprawling Los Angeles County, where citizens and noncitizens have lived side-by-side for decades.

Though estimates vary, experts calculate that more than 1.6 million illegal immigrants live in Texas, making it second only to California in the size of its undocumented population.

The LAPD has spent decades avoiding a significant role in the enforcement of federal immigration policies, even as the city’s undocumented immigrant population swelled.

Following a special order by then-chief Daryl Gates in 1979 that stopped officers from inquiring about someone’s immigration status, the Los Angeles Times reported, the LAPD has for decades managed to remain outside the contentious immigration debate.

In a subsequent interview with the L.A. Times, Beck reiterated that working with the Department of Homeland Security on deportation is not the department’s job.

“I don’t intend on doing anything different,” he said. “We are not going to engage in law enforcement activities solely based on somebody’s immigration status. We are not going to work in conjunction with Homeland Security on deportation efforts. That is not our job, nor will I make it our job.”

Unveiled in 1979, “Special Order No. 40” directed LAPD officers to “not initiate police action” in an effort to ascertain someone’s legal status. Officers were instructed to notify the U.S. Immigration and Naturalization Service after arresting someone “for multiple misdemeanor offenses, a high grade misdemeanor or a felony offense” or someone who “has been previously arrested for a similar offense.”

“The Los Angeles community has become significantly more diverse during the past several years with substantial numbers of people from different ethnic and sociological backgrounds migrating to this City,” the order states. “Many aliens, whether from Latin American, African, Asian or European countries, are legal residents. Others are undocumented and are residing in the City without legal sanction.”

Since Beck became police chief in November 2009, the Times reported, the department has gone even further to remove itself from playing a role in deportations. Officers no longer hand people “arrested for low-level crimes to federal agents for deportation and [have] moved away from honoring federal requests to detain inmates who might be deportable past their jail terms,” the paper reported.

Beck told the Times that his command staff has met with community leaders and has delivered a consistent message when asked about immigration enforcement:

“Our law enforcement officers and LAPD don’t go around asking people for their papers, nor should they,” he said. “That’s not the role of local law enforcement.”

Though Trump has threatened to withhold federal tax dollars, mayors of U.S. cities across the country have promised to protect their residents from deportation.

New York Mayor Bill de Blasio even left open the possibility of deleting a database with the names of hundreds of thousands of undocumented immigrants living in New York. He was joined in opposition by Chicago’s Rahm Emanuel and Seattle’s Ed Murray, both of whom have pledged to resist efforts to deport their residents.

“Seattle has always been a welcoming city,” Murray said Monday, according to ABC News. “The last thing I want is for us to start turning on our neighbors.”