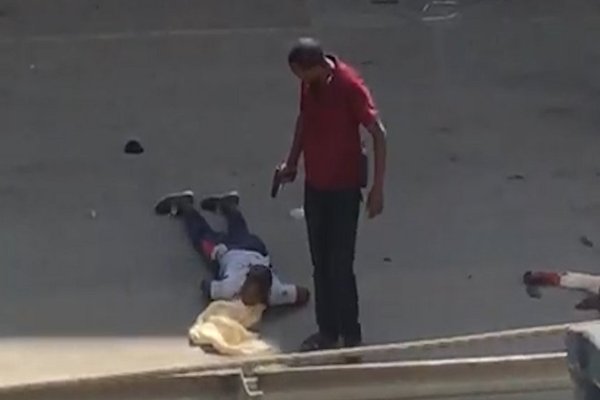 IG Joseph Boinnet has ordered a probe into a viral video depicting the alleged extrajudicial killing of two suspects gang members in Eastleigh.

Police spokesperson Charles Owino also said those in the video must be identified for a probe.

“The important thing is the person must be identified whether they are policemen or not,” he told the Star on Saturday.

The minute-long clip that surfaced on Friday shows a person alleged to be a police in plain clothes apprehending a suspect. The body of another suspect covered in blood lies in the middle of the road.

Another man in police uniform holding what looks like an AK-47 rifle is seen dispersing the crowd.

When the suspect tries to struggle with the alleged plain clothes officer, he is shot at close range.

Four more gunshots are heard as the camera moves away.

When the camera focuses back on the scene, the man is seen standing over the suspect. He asks a colleague for a pistol, then shoots the suspect below him. Five gunshots are heard.
https://www.youtube-nocookie.com/embed/mjEPS25Iqqo

The man, thought to be a cop, reloads the gun, then shoots the suspect who is still lying on his stomach.

It is unclear when the alleged incident happened. But it is said that the dead suspects are members of the notorious Super Power Gang and were about to commit a robbery.

The gang is among more than 90 groups outlawed in a gazette notice by Interior CS Joseph Nkaissery in December last year.

But Nairobi Police Commander Japheth Koome told the Star on Saturday that the video “was acted”.

Koome said the video acted was meant to discourage him from making sure people are safe in the country.

“Whether those people act to discourage me … I am even more motivated and i have no regret,” Koome said.

Koome said he will be ruthless to the “criminals” and asked them to surrender guns.

“I am ruthless. I do not talk much but I am ruthless … but one thing everybody needs to know is that I will deal with the criminals,” he said.

“We will not going to give the criminals any chance … I am currently burying a cop killed by a gangster in Meru.”

On March 21, Independent Policing Oversight Authority said Police commanders are to blame for the pervasive cases of extrajudicial killings in the country.

The police watchdog said the leaders have failed to take steps to comprehend the strict provisions of the law regarding use of firearms and lethal force.

Dennis Oketch, IPOA head of communications, said they are probing cases of enforced disappearances and other forms of rights abuses by officers.