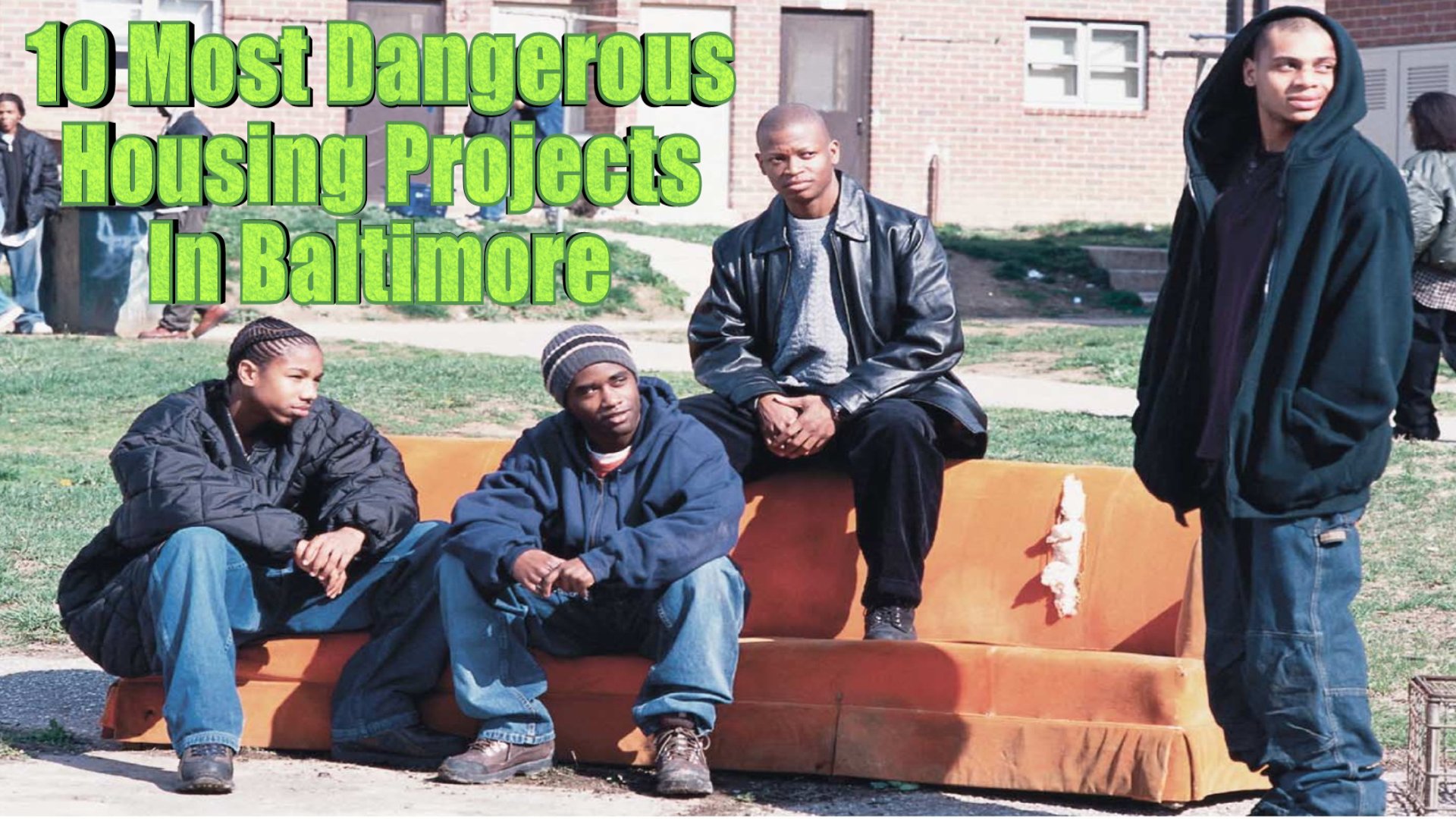 Baltimore is a city of great contrasts. Ranked as one of the best cities to live in thanks to its thriving economy, vibrant nightlife and plethora of sporting venues. This seaport city has its fair share of social and economic problems. In addition, the city’s neighborhoods have been the subject of countless stereotypes.

Made up of 54 neighborhoods Baltimore is thus not only one of the best places to live in but also one of the most dangerous. According to statistics, a third of all gunshot victims in the city die. From these statistics, it is clear that Baltimore has a lot to deal with especially in regards to street gangs and mass shootings. Based on scientific data and data from law enforcement agents, here are the ten most dangerous housing projects in Baltimore.

This public housing project opened in 1956. It consisted of seventeen low rises and six high rise buildings. It was occupied by over 500 families. This community became one of the largest complexes in the nation and the first high rise project in the city. However, as the 80s drug menace continued, the community became a battleground for rival drug dealers.

With police being overwhelmed by the situation, the Nation of Islam was brought on board to provide security to the development. Years of drug dealing, poverty, and poor maintenance took a toll on Lafayette Courts. The residents and city officials seemed to all agree that the community was a lost cause and could not be fixed.

According to the Baltimore Sun, this was just another failure by the government in their attempt to confine the impoverished. Demolition started in 1995 where many celebrated amid live television feeds. The community was imploded paving way to the creation of mixed-income homes through a program called Hope VI.

Over sixty people were arrested and charged with planning to sell and distribute drugs in the community. A youth working for a street safety and violence prevention program was accused of selling drugs at the homes; this was in 2017.

In 2016, a shooter in the area wounded two children and an elderly woman in a wheelchair. The police stated that the shooter was playing dice where he left and came back wielding a gun to the crowds. Indeed, security has been a great problem at Latrobe Homes further denting the reputation of the community.

Perkins Homes is one of the oldest public housing projects located in the southeast area of Baltimore. The neighborhood is composed of neat row houses such as Little Italy, Upper Fells Point, and Fells Point. This development came before the notable high rise era. The crime rate here has been above average in terms of national rates.

However, the abundance of mice and rats was unsettling with one senior lady saying that pests freely roamed the buildings entering the houses through windows. Plans are underway to upgrade and redevelop this community; this is according to the Housing Authority of Baltimore. The idea is to create mixed-income homes that serve the needs of residents in a responsive manner.

Also, this will go a long way in reducing crime and mitigating poverty. Shocking stories of crime from Perkins Homes have also been quite a number. One particular incident in 2013 left many horrified. Victoria Glover was loading her son in her car when she was shot to death right outside her home. The person who killed her was her estranged husband Cory Bowman. Bowman later committed suicide in one of the apartments in the Perkins Homes.

Located in West Baltimore, the Gilmor Homes was a public housing project erected in the Winchester area. This development was also bedeviled by a host of challenges that came with public housing projects. These homes also tell a story of criminal activity coupled with poverty and desperation. In fact, this community ranked number three in the list of the most notorious projects in the city.

This complex is comprised of 600 units and the community has continually hit headlines with horrifying stories. A case in point is when in 2015, the whole nation witnessed the arrest of Freddie Gray. You will remember that Gray was pursued and arrested by police officers and suffered a fatal injury while under the care of officers.

Still in Gilmore, women sued the maintenance workers for soliciting sexual favors in order to repair the gas leaks and exterminate pests. This suit was settled for $8 million. Owing to the crime rate, the city decided to start relocating some families in a bid to demolish some buildings. About 120 families were due to be moved to other areas. The mayor stated that this move would also play a vital role in reducing crime.

This public housing complex was one of the largest in southern Baltimore. Primarily, it was constructed to house black families at a time when segregation was commonplace. Just like many other public housing developments, Cherry Hill Homes became fertile ground for crime, with drug-related violence being the most common problem.

In light of this, this complex became highly dangerous as gangs thrived in the area freely. However, in 2013, the local police went on a major crackdown in a bid to dismantle notorious drug cartels. The results have been a reduction in crime rates. Today, there are still elements with criminal intent but not compared to the 80s and 90s. The community is composed of townhouses with units occupied by both owners and tenants.

This public housing project was put up exclusively for African Americans in the 1940s. One of the main reasons why this project was built was to prevent black people from settling in the white neighborhood of Bolton Hill. These projects became known as ‘The Pitt’ because they served as dens and hideouts for drug dealers and gangs. The reality was accurately portrayed in the HBO TV series, The Wire.

One shocking crime story was that of a young boy who came home from school to find his mother tied and handcuffed in their home. Because the suspect was still in the house, the boy was also tied down using belts on his feet and hands. The area has since been redeveloped putting up modern housing to suit mixed income families.

This project constituted both low rise units and three 12-story buildings. Originally put up in 1955, this public housing complex had a myriad of amenities including a swimming pool, a basketball court, and a dancing area; among others. The development, however, saw the elevators fail on many occasions, trapping people inside. With dirty grounds and buildings, the resident was always oozing a sense of despair.

The crime and drug violence did not help either. In addition to living in a bad state, over 2,000 tenants had to grapple with high insecurity. In 1992 for example, a police officer was pursuing drug traders when he was ambushed and shot dead inside the Flag House projects. In the homicide case, a teenager and two men were charged.

In 2001, these projects were imploded. Today, the community has been urbanized and renamed Albemarle Square. It is an innovative development that caters to mixed-income families. The newly revitalized community opened in 2006 with both homeowners and tenants.

This public housing project was initially meant to be a temporary shelter for industrial workers during World War II. After the war ended, such projects were rebuilt and upgraded or totally demolished. However, nothing changed at O’Donnell Heights. At first, this was a white community but after 1967, integration started and black families also settled here.

In a way, a lot of crime related to drugs and gang violence was brought here by gangs who came from projects that had been closed. These drug rings had been displaced and this became the right breeding ground for their activity. To this end, the housing project suffered from all manner of criminal activity and many residents opted to relocate.

The Nickel Boys emerged as one of the most notorious drug gang in the East Baltimore area. From cutting phone lines to shooting lights, the gang had managed to terrorize the neighborhood. Demolition of old buildings stared in 2007 in this area. Redevelopment is underway to create a more conducive mixed-income community.

These projects were best known for their crime rate and they consisted of 22 low rise buildings with five high rises. Located in West Baltimore, the housing projects birthed notable hardcore drug dealers including Nathan Barksdale, popularly known as ‘Bodie’ as well as Warren Boadley whose street name was ‘black’. These two criminal heads ruled over the projects for the better part of the 80s.

The 90s saw the formation of a notorious drug ring called the Jamaican Black Mafia. This armed group had the Terrace and its stairwells as their dwelling place. This group was however not alone: a well established youthful drug ring also terrorized the area in the 80s. The group was called the Lexington Terrace Boys and their violent impact was felt even at the neighboring Poe Homes.

This group killed two victims at a row house basement and later shot dead a witness to those crimes while he was walking down a street. This gory past has since been replaced by neat row houses furnished with white porches. The community is now referred to as Terraces.

Residents nicknamed these projects the ‘Murder Homes’ to showcase the security level which was on its knees. The drug cartels here operated day and night leading police into chase battles that had clearly become overwhelming for the security officers. The complex featured four 14-story high rises and low rise townhouses on 15 acres. These homes were riddled with poverty, violence, and drugs.

It got so bad that police officers had to walk with guns cocked on the streets just to bring some order to the defiant crowds. In fact, the situation was comparable to Soweto, Bosnia, and Belfast where the civil unrest gave birth to more violence. It is this gloomy scenario that made Murphy Homes infamous; ranking as one of the most dangerous housing projects in Baltimore.

Chilling stories have emerged from these projects, one of the tales being from Victoria Bogier; a single mother of three who was 23 years old. One morning, Bogier was walking her daughter to school when they had to walk past a horrific blood-stained body in the stairwell. It was obvious that the person had died from multiple gunshot wounds that were quite visible.

In 1991, the body of a young man was discovered at the stairwell bearing a bullet to the head, according to the Baltimore Sun. Drug lords at Murphy Homes have also inspired TV characters, the most conspicuous being ‘The Wire’. Avon Barksdale was the character that portrayed Nathan Barksdale in the HBO series. Barksdale was a violent heroine dealer who ran a million dollar operation in the 80s at the housing projects.

A parallel rival gang led by Timmirror Stanfield also operated from the Murphy Homes. In 1986, Stanfield was tried in a murder case. This crime-laced history has been seemingly erased by the redevelopment of the community. Today, modern townhouses provide a suburban appeal in a community that has since been renamed Heritage Crossing.

These were the 10 all-time most dangerous housing projects in Baltimore! Have you ever had the chance to walk through some of these locations? Have you ever heard stories and testimonies about the life in such complexes?