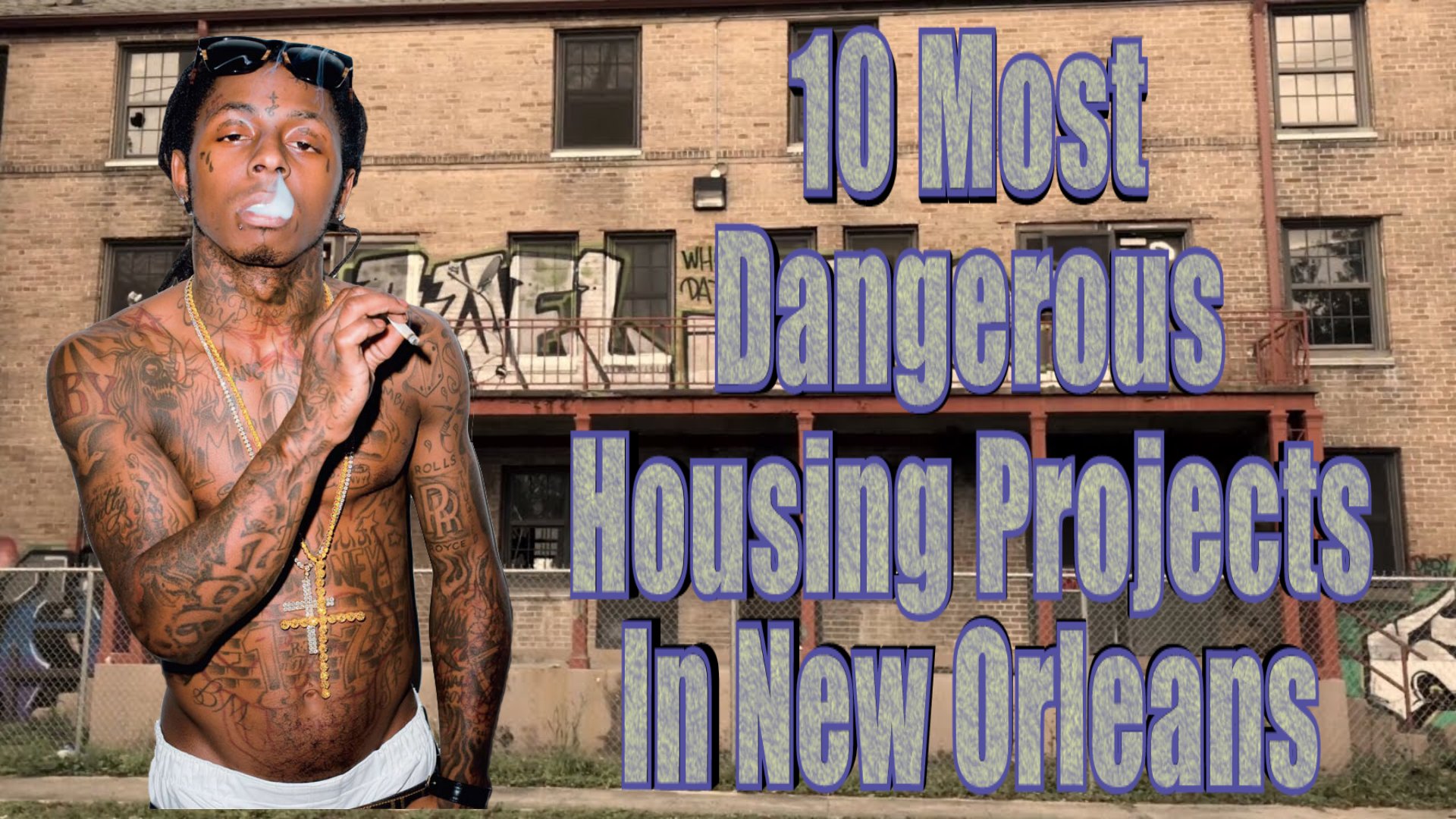 When visitors think of New Orleans, their minds often picture its round-the-clock nightlife, vibrant live-music scene, spicy cuisine, street parties, and costumed parades. It is perhaps, most famously known for its popular cultural phenomenon, the Mardi Gras, drawing in thousands of tourists every year.

The neighborhoods within New Orleans hosts a diversity of individuals. There are preppy places, ghettos and hipster areas. It seems like an area where people from all walks of life can thrive. While this city continues to rank as one of the best areas to live in the country, some neighborhoods in New Orleans should be avoided at all cost.

The projects of New Orleans are rife with crime, even today, and have a long history of violence and bloodshed. Some of the stories from certain project developments are so extreme that we could only imagine them being part of a movie. And yet they happened in real life between real people in New Orleans.

Some of the projects are beginning to improve as restoration and redevelopment plans are enacted, while other projects have been completely demolished. In no particular order, here are the top ten most dangerous housing projects in New Orleans.

Initially, St. Thomas housing projects was occupied by white low-income families. However, this changed after 1964 when an act for civil rights came into being. This resulted in African American families also settling at the projects. From the 70s, the economy was devastated owing to many hardships. To this end, incomes suffered and families became impoverished. At this point, crime began to take center-stage with heroine use becoming a serious problem. In 1991, this project became the worse where stray bullets would hit even children. From rapes to murders and assault, this community was notorious. From 1996, the state started getting some funding that would help in the redevelopment of the project.

In the 1980’s, the St. Thomas Projects was one of the most lethal places to live. Residents would place boards over their windows because the chances of a stray bullet breaking the glass were high. Even local law enforcement were reluctant to travel near the St. Thomas housing project, not wanting to place themselves in unnecessary danger.

By 2001, many of the buildings had been brought down as the new project came up. The new complex was called the River Garden and it was to cater to mixed-income families. Today, the modern housing units are comfortable for urban living catering to mixed and low-income families. With a host of amenities in the neighborhood, this is indeed a transformed community.

The St. Bernard Projects record around a dozen murders per year. According to local law enforcement, most of these murders are accounted to “turf wars.” Over the past several years, the homicides have been in decline, giving residents hope that peace may soon be a reality for their housing development. Some speculate that the crime situation at St. Bernard is beginning to improve due to the crimes themselves. According to local law enforcement, they believe that the criminals are mainly killing each other off, which is solving half of the problem. The other half of the criminals are being dealt with legally and thrown into jail.

The neighborhood has since been rebuilt as Columbia Parc; with essential amenities provided for the community. The adjacent neighborhood include St. Roch, Dillard, Filmore and City Park. Today, the transformation has seen the building of 2-story townhouse units with a total of 685 apartments featuring a fitness center, outdoor pool and a movie theater. With this rejuvenation, crime rate was reported to have dropped by 73% as of 2013.

This public housing development was first constructed in 1940 and by 1941, it had a total of 3,000 tenants. Because it was the first project for African Americans, it became the oldest in downtown New Orleans before demolition. The 80s brought a myriad of challenges to the projects and drug problems became a real menace. Violence and murder soon became the order of the day at Lafitte.

Lafitte Projects is the housing project known for the man named David Williams. In 1994, when New Orleans’ crime rating was at its record high, Mr. Williams poured gasoline over a man he had handcuffed in the courtyard of Lafitte. A crowd of people stood by and watched everything happen without intervening, too afraid of becoming the target to do anything to help the man. Mr. Williams lit the man on fire as the countless witnesses watched, nobody dousing the fire until the man had burned for several minutes.

Despite the number of witnesses, nobody would testify against David Williams in court and the man nearly walked free. Two years after setting the man on fire in the Lafitte Project’s courtyard, a twelve-year-old girl who bore witness to the murder gave testimony against Williams. This successfully convicted David Williams, who was promptly sentenced to prison.

The Iberville Projects are refreshingly less plagued with crime than any other project on this list. Their crime rate is drastically lower than any low-income housing project across New Orleans, in fact. They come in at just the same as the nation’s average of 4.9 out of one-hundred thousand people victimized by crime. Iberville’s crime rate earns it the title of being one of the safest cities in the entire state of Louisiana – an astounding ninety-eight percent safer, to be precise. The crime rate in Iberville has actually declined by seven percent over the past couple of years. They only see it decreasing further as time goes on.

From the 1970s, The Fischer Projects have been a highly violent housing project in New Orleans. Rapes and robberies were commonplace at that time and, in the 1980s, murders and drugs had badly deteriorated the Fischer Projects and the surrounding area. Residents of Fischer were understandably silent on matters regarding the crimes they did see, fearing retribution should the criminals catch word of who spoke out against them.

Due to the frequency of the crimes in the Fischer Projects, the housing project soon became completely intolerable in which to live. At the end of it, a sniper would set up camp atop a nearby high rise building and murder local law enforcement who attempted to enter the complex. Eventually, the police began avoiding the Fischer Projects, in light of losing so many of their fellow officers to hidden gunfire.

The Desire Projects are most known for the infamous incident that occurred between the Black Panther Party and local law enforcement. This event is known as the Thirty Minute War and took place on September 15th, 1970. Police had been trying to break into the power group for many months and, on this date at 8:30 in the morning, cruisers and newsman arrived at the Desire Projects in a sting operation.

Federal and state law enforcement also joined them. Despite heavy gunfire from the law enforcement’s side, armed with machine guns and automatic rifles, no injuries were incurred from either side. The Black Panther Party eventually surrendered, under siege of tear gas, and were taken to prison.

The Melpomene Projects, also referred to as the Melph, took up an astounding ten city blocks and was comprised of seven buildings total. Four of those buildings were three stories, two were four stories, and the last was a high rise dedicated to the elderly. Melpomene is the third project with the highest crime rating in New Orleans, completing the Calliope – Magnolia – Melpomene trifecta.

This particular project formed its own gang by the same name – known as the Young Melph Gang – and enacted several murders and drug deals. The group was formed of five men and they were sentenced in the summer of 2017, the leader receiving life in prison plus thirty-five additional years. He was convicted of twenty-one of the twenty-four charges laid against him.

The Melpomene Projects are the youngest housing projects of New Orleans still left standing after the destruction of Hurricane Katrina, although three of the smaller buildings were purposely destroyed when they did not meet the Housing Authority of New Orleans’ guidelines.

The New Orleans Police Department compared Magnolia to a war zone, saying that it was saturated with gangsters and overrun with drug dealers. Half of the 1,403 units available in these projects were abandoned and children would play in them, often finding corpses. The abandoned units were the stomping grounds of Magnolia’s worst, who would use the space to stow away drugs and weapons or even rape women.

As New Orleans worked to redevelop the projects and tackle its largest concentration of crime, the Magnolia Projects were renamed Harmony Oaks. Those tending to the property have implemented a “one strike” rule, both to deter and to weed out the troublemakers in the new Harmony Oaks and make the community a safer place to live for residents.

Famously known as the birthplace and childhood home of successful businessman Master P, the B. W. Cooper was a large, notorious housing project in New Orleans that was torn down in 2014. Also going by the name of the Calliope Projects, the neighborhood has been a breeding ground for crime since the 80s. Their crime rate was extremely high, one of the biggest contributors to New Orleans’ overall crime stats. Calliope was rife with violent crime, drug deals, and murderous retaliation toward those willing to testify against crimes until the complex was replaced with mixed-income apartments.

Between the years of 1993 and 2004, eighty-eight people were murdered in the Calliope Projects. The year of 1994 was one of the bloodiest years on record – and not just for Calliope, but for New Orleans as a whole. The homicides in the Calliope Projects was the chief contributor of the overall record-high crime rate in New Orleans in 1994. The drugs and violence of this particular housing development was the major reason New Orleans was christened with the title of “Murder Capital of the United States.”

Today news reports, rap lyrics, and urban legends act as constant reminders of the deadening effects of the New Orleans projects. This was our list of the 10 housing projects in New Orleans that you should steer clear of!

Have you ever had the chance to walk through some of these locations? Know some stories or first-hand testimonies about the life in a public housing complex?