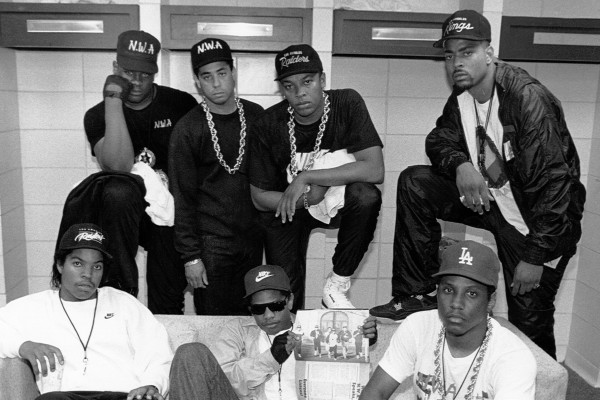 Decider-The Netflix Original Series Hip-Hop Evolution is far from the first documentary to explore the genre’s backstreet back story, but it is certainly the most exhaustive. Like producer Banger Films’ similarly titled Metal Evolution, their excellent study of the history of heavy metal, the series talks to scene makers, musicians and managers, telling you not only what happened when, but why it happened the way that it did. Over the first three episodes, its charted the genre’s winding path from the parks of the South Bronx, to the discos of Harlem, south to the art galleries of Downtown Manhattan, and out to the working class enclaves of Queens and the suburbs of Long Island.

Episode 4, “The Birth Of Gangsta Rap,” finally takes us out of New York, depositing us in the deceptively sunny climes of Los Angeles, California. Though the region was blessed by good weather —and reveled in Hollywood glitz and fun and sun beach culture— it was also the gang capital of America. Bloods, Crips and multi-generational Latino gangs fought for power and primacy, and by the time rap arrived on the West Coast it was estimated that there were over 600 street gangs and 70,000 gang members in Los Angeles County (current estimates now put that number at over 1,300 gangs with 120,000 members).

You wouldn’t guess that, though, by listening to any of the early West Coast forays into hip hop. Party funk and electro ruled the day, as group’s like World Class Wreckin’ Cru, featuring future N.W.A. members Dr. Dre and DJ Yella, donned themselves in shiny suits influenced by Prince while their techno beats inspired robotic popping and locking, the West Coast equivalent of breakdancing. If the music initially lacked the gravitas of New York hip hop, that’s because according to pioneering L.A. rapper Ice-T, “L.A.’s musical scene was secondary to the gang scene.”

It would be self-described Crip “affiliate” Ice-T that would put West Coast hip hop on the map and forever tie it to the city’s native gang culture. “I can’t just live the game, I’ve got to document the game,” he says by way of explaining his seminal gangsta rap song, “6 in the Mornin’.” Fellow L.A. rapper MC Eiht of the rap group Compton’s Most Wanted says, “When I first heard “6 in the Morning,” I basically was like, ‘Oh this is the gangbanger’s anthem.’” Ironically, the gangsta rap Ice-T practiced was actually inspired by an East Coaster, enigmatic Philadelphia rapper Schoolly D, who bragged about his exploits and chronicled gang life on the 1985 classic “P.S.K. What Does It Mean?”

With the introduction of the crack cocaine, L.A.’s gang problems only got worse. The crack trade made gangbangers rich, starting an arms race as they could now afford powerful firearms, sending body counts sky-high. As East L.A. rapper Kid Frost says, “the streets weren’t free no more and the music wasn’t so happy no more.” For musicians like Dr. Dre and DJ Yella, the grim circumstances on the streets of South Central Los Angeles demanded an equally grave musical response.

Recruiting rappers Ice Cube, MC Ren and former gangbanger and drug dealer Eazy-E, Dre and Yella formed N.W.A. The combination of Dre’s expert production, a funkier version of Public Enemy’s jarring soundscapes, plus Cube’s superior MC skills and the authenticity Eazy-E brought to the game, resulted in 1988’s Straight Outta Compton, one of the best and most important hip hop albums of all time. Authority figures bristled at the album’s all-too vivid depictions of gang-life, and the brazen “Fuck tha Police,” which directly addressed the longstanding problem of police brutality. To many in Los Angeles, the city’s aggressive and militarized police force were as much of a gang to be feared as any Crip or Bloods set. The song provoked the enmity of law enforcement, including the FBI – who wrote the band’s label, and local police in Detroit, who stormed the stage when the band performed it there.

If anyone doubted the veracity of N.W.A.’s street reportage, the videotaped beating of black motorist Rodney King by four members of the LAPD, and the riots following their acquittal confirmed their accuracy and cast them as prophets. By then, however, the band had already disbanded. Leaving N.W.A. behind him, Dr. Dre would go onto to craft an album that still reflected L.A. street life, but coated it in a smooth sheen, with multi-platinum results. 1992’s The Chronic, named after the powerful marijuana that powered its recording sessions, eschewed heavy sampling in favor of live instrumentation, all funky bass and whizzing synth lines, and introduced Snoop Dogg to the world. It’s high gloss sound made it a huge commercial success, and would shape the blinged-out hip hop of the rest of the decade.

Hip-Hop Evolution stops there, though as we all know, that isn’t the end of the story of hip hop. It traveled down south and up through the Midwest and eventually overseas, each time incorporating different regional accents and influences. It now boasts as many sub-genres as heavy metal, each of which were examined at length over the course of Metal Evolution‘s 12 episodes. Hopefully, there are more seasons of Hip-Hop Evolution to come, as there’s many other interesting and important stories to tell, and Banger Films are just the guys to do it.

Benjamin H. Smith is a New York based writer, producer and musician whose first interview subject was Yo-Yo.  Follow him on Twitter: @BHSmithNYC.