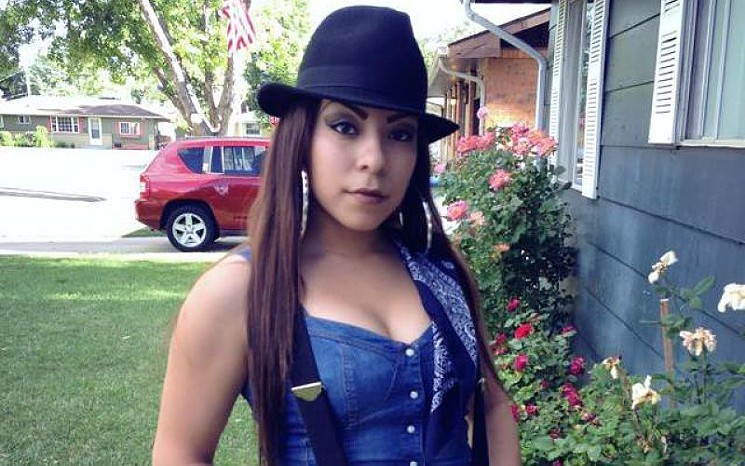 Rachel Aboytes (September 11, 1993 – March 26, 2015) better known by her stage name La Baby Smiley, was an American Chicana gangster rapper from Longmont, Colorado. She rose to prominence, after being gunned down in a gang-related drive-by shooting at the age of 21. La Baby Smiley made an impact in the music world after being featured in a music video for “Southsiders,” a song by Mr. Yosie and Triste de Nemesis, Chicano rappers with gang affiliation to the Florencia-13 (F13), a violent street gang with roots in South Los Angeles, California.

La Baby Smiley was born in El Paso, Texas to immigrant parents from Mexico but spent a great portion of her childhood in a small town on the plains of Kansas, according to Westword.com. During her adolescent years, she moved with her family from Kansas to Longmont, Colorado. Rachel and her two older sisters were known as the “Smileys,” which originated with Eunice Aboytes (Smiley AKA Big Smiley), the oldest sister of Racheal Aboytes. Rebecca, the second oldest became known as Lil Smiley and Racheal adopted Baby Smiley.

La Baby Smiley was known for her distinctive, sense of fashion, which resembled Cholas from the 1980s and early 1990s. Who usually dressed in dickies, a buttoned up Pendleton or flannel shirt, accompanied by Nike Cortez or Converse All-Stars also known as Chuck Taylors. She also branded her body with the famous three dot tattoos commonly sported by Latinos, which represents Mi Vida Loco (my crazy life). She became affiliated with the Sureños 13 or South Side Sureños 13, which is composed of several Mexican-American street gangs that pay taxes to the Mexican-Mafia.

Vida Sureña – In grade school La Baby Smiley, gave one of her fellow classmates a vicious beat down for wearing red, which is the primary color for Norteños, who are bitter rivals of the Sureños. This decades rivalry originated between the Mexican-Mafia and the Nuestra Familia, two of the most violent prison gangs in the world. The student (victim) was beaten so badly she filed for a restraining order against La Baby Smiley, according to Chris Walker (journalist).

In 2012, La Baby Smiley recorded “Al Ratos Laters,” a self-released song which caught the attention of Ruben “Ice Pick” Cardenas, founder of Cirkulo Asesino Entertainment. La Baby Smiley instantly bonded and collaborated with two other Cirkulo Asesino artists, Mr. Yosie and Triste de Nemesis, the trio openly and proudly expressed their affiliation with Sureño 13, on songs such as “Southsiders” and “Mas Que Musica” (More Than Music). La  Baby Smiley music often contained samples from oldies such as “There Goes My Baby” by The Drifters and “I Want You Round” by Mary Wells.

On March 24, 2015, Racheal Aboytes was visiting Valeria Garcia, a close friend who lived in East Dever. The two women were walking back to Garcia’s house near the intersection of East 16th Street and Valentia Street. When their conversation was interrupted by death, disguised as two African-Americans (male and female) who pulled beside them in a silver Jeep Cherokee and started a verbal confutation followed by gunfire. Police received a call about shots being fired in the Colfax area where they found Racheal, suffering from multiple gunshot wounds.

She was transported by ambulance to Denver Health Medical Center, where she was officially pronounced dead. Her death was featured on several media outlets including CBS News. Several fellow musicians have dedicated tribute songs to her memory: “Ultimo Beso” (Last Kiss) by Triste De Nemesis and Rest In Peace Racheal Aboytes (Baby Smiley) by Wonderlox and “Aun Vives Rachel” by Mr.Yosie Locote, Mr. Weed, Mr. Yoggi, Big Smoper, Tao G and many more. Cirkulo Asesino Entertainment posted the following on their websites:

“Rachel Aboytes known to the music industry around the world as La Baby Smiley took her last breath in the middle of a street where she was taken with the angels. She was a victim of a heartless crime shot in a residential area and left in the middle of the street gasping for life. She was pronounce dead by coroners moments after arrival.”