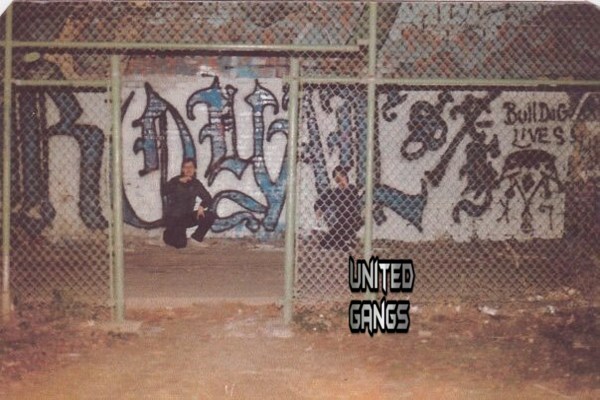 The Simon City Royals (SCR), are one of the few primarily Caucasian-European gangs in the city of Chicago. Born in 1950s as a group of greasers, a typical white youth subculture, they owe their name to Simons Park, their original stronghold and base of operation.

The gang was immediately involved, in the 1960s, in a series of neighborhood wars for control of the surrounding areas, quickly coming to blows with other emerging groups such as the Latin Kings. Talks aimed at an alliance with another gang known as the Ashland Royals were also underway.

The leader of the Simon City eventually fought one of the high-raking members of the Royals. Following his defeat, the two gangs were merged into a single one, now known as the Simon City Royals. The entire process would take several years and was only terminated at the end of the decade, when all members had either joined the new gang or quit completely.

The 1970s and The Gang’s Decline
Although the two gangs were now united under a single leader, turf wars would continue for most of the 70s and well into the 80s. The SCR fought major wars against both Caucasian and Hispanic gangs. Several lives, including those of a good number of SCR generals, where lost in the fight.

The gang had nevertheless managed to expand and was now in control of several new neighborhoods. In the late 1970s, leaders of the Simon City Royals, in an attempt to protect their members who were locked up in correctional facilities throughout the state, decided to join the Folk Nation alliance.

It is during this time that the Royals fought another set of bloody wars against the Latin Kings, the Gaylords and the Insane Deuces. The decline of this gang began in 1984, when two members killed a 14-year-old rival by shooting him in the back in broad daylight. The duo was spotted by Michael Scott, who would then testify against them.

Present Day
Mike Hynes and Orlando Serrano were quickly charged and tried. Although Serrano, who had claimed not to be affiliated with the Simon City Royals was found not guilty of the crime, Mike Hynes spent 20 years in prison. He was eventually killed briefly after his release; having been an accessory to the stabbing of a woman in a bar.

The internal instability and the fact that a good number of members were turning on each other meant that the gang was no longer able to operate as a solid and focused unit. Many left the association, while others were simply driven out of the specific neighborhood by a quickly changing demographic.

Although the Simon City Royals still control several of their original neighborhood around the city of Chicago, today the group seems to be lacking the numbers and strength to continue their operations. While remaining primarily a white gang, the SCR opened their doors to both Hispanic and African American members. The gang mostly focuses on dealing drugs to inmates, partially thanks to a large number of members who are still in prison.