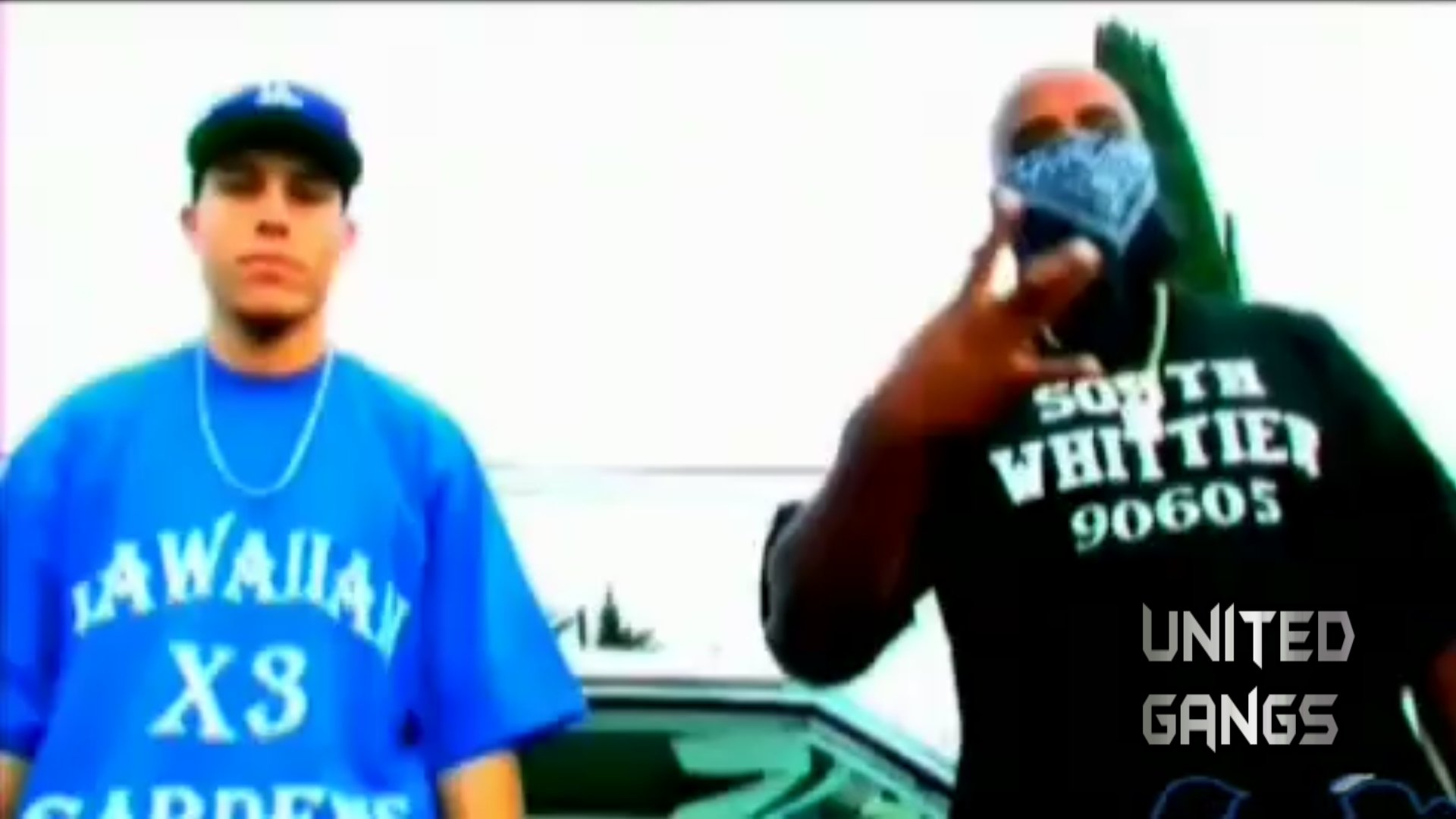 They claim the entire city of Hawaiian Gardens especially in the Southern area of Carson Street between 219th Street and 226th Street with cliques such as Malditos (MDTS) and Loquitos (LQTS), which means “Little Crazy Ones”. They use the mascot of Hawaiian Punch (Punchy), a cartoon character who debuted in 1961.

Louis Jessy Flores (born 1955), better known on the streets as “Huero Buff” was an active member of the Varrio Hawaiian Gardens who founded the Mexican Mafia (La EME), during the 1950s. After serving five years on drug charges, Flores returned home and celebrated by drinking a bottle of tequila. He died of alcohol poisoning in 1991.

in 2005, Deputy Jerry Ortiz, a police officer who was gunned down during a investigation about a parolee wanted on suspicion of attempted murder in another case. Deputy Jerry Ortiz, was interviewing a wowan in a apartment complex located in Hawaiian, when the suspect emerged from the apartment and shot the officer once in the head.

In 2007, Jose Luis Orozco, better known on the streets as “Sepy” an active member of the Varrio Hawaiian Gardens was sentenced to death for the murder of Deputy Jerry Ortiz and attempted murder of an African-American who was shot the previous day.

The Varrio Hawaiian Gardens are widely known for their hate crimes against African-American residents, similar to other Hate Gangs such as the Azusa 13 and the Compton Varrio 155 as well as The Avenues. These gangs share a common goal, to cleanse their neighborhoods of all African-Americans by any means necessary.

Their hatred towards African-Americans can be traced back to the early 1990s. For example in 1993, members of the Varrio Hawaiian Gardens gang threw a firebomb (Molotov cocktail) through the window of Cynthia Hayes. She rushed her children outside to avoid burn injuries, only to find their home have been vandalised with graffiti of racial slurs.

in 1999, Virgil Henry III, a 24-old-year-old African-American who lived in Van Nuys, was beat to death by Latinos, after visiting his parents who lived in Hawaiian Gardens. Virgil Henry was chased near Carson Street, after noticing an angry mob of Latinos, (including men and women) yelling racial derogatory terms.

Henry ran through the parking lot of a nearby shopping center, in an attempt to escape the hate group. Unfortunately, Henry was eventually surrounded by several Latinos who took turns beating him with a baseball bat. Police arrived on the scene only to find the victim suffering from multiple head injuries with a portion of his head bashed in.

In 1996, 27-year-old Martin Hammonds, an African-American male and a former high school player, was shot to death by Rudy Villa Jr., a Latino male and member of the Varrio Hawaiian Gardens. The shooting took place in a mid-afternoon as Hammonds walked down a busy street (Norwalk Blvd).

Rudy Villa Jr., was convicted and sentenced to 65 years to life in prison. In the same year, Michael Bennett, a middle age African-American survived multiple attacks, losing several of his teeth after receiving a vicious beaten by members of the Varrio Hawaiian Gardens. Michael Bennett, is also the uncle of slang victim Martin Hammonds.

Oct 5, 2009, the Hawaiian Gardens were targeted in a massive criminal investigation dubbed “Operation Knock Out” conducted by 1,400 local, state and federal officers. The gang sweep resulted in the arrest of at least 90 members of the Varrio Hawaiian Gardens Gang.

The Hawaiian Gardens mainly feud with gangs in nearby cities such as Artesia 13 and Chivas 13, two Latino street gangs located in the city of Artesia, California. For instance On January 13, 2008, a member of the Varrio Hawaiian Garden was charged with attempted murder of a Latino male, who was a paraplegic bounded by a wheelchair.

The victim was on his way to an ice cream polar located in the city of Cerritos, when he was confronted by a car load of Hawaiian Gardens, due to his former ties to the Artesia 13. The suspected gunman was sentenced to 62-years to life in prison.

They also claim Crip Killer (CK) after a member of the Varrio Hawaiian Gardens (Loquito) was shot and killed by members of the Crips in 1989.