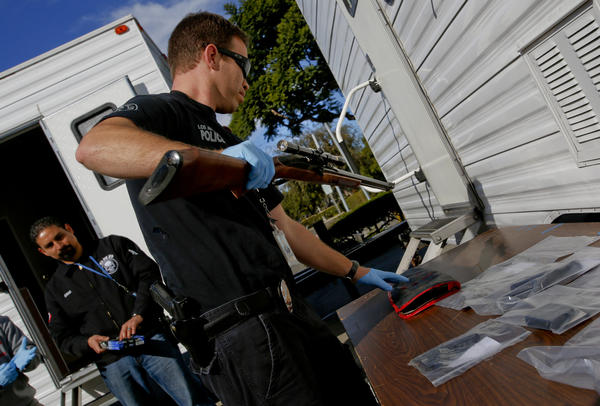 Nineteen alleged members and associates of the Mara Salvatrucha-13 gang, including a high-ranking leader, were arrested Tuesday after a two-year investigation, authorities said.

The investigation targeted “leadership, shot-callers and decision-makers” in MS-13 connected to its overseer, the Mexican Mafia, said Timothy Delaney, special agent in charge of the Los Angeles FBI criminal division.

Authorities allege Thomas “Big Boy” Rodriguez, 35, of Los Angeles, is one of those top-ranking members; he was arrested Tuesday on federal charges tied to methamphetamine distribution.

Although federal indictments were brought against 20 suspects, one still had not been arrested as of Tuesday: Elvis “Lil Comando” Molina, 33, of Lynwood.

MS-13 began among Salvadoran refugees who came to Los Angeles in the 1980s as a means to escape civil war in their native country. Over the years, the gang earned a reputation for its brutality and as a feared transnational crime organization.

Delaney said the arrests could impact MS-13’s presence in lock-ups across the state and county.

“These aren’t low-level drug dealers,” Delaney said of the arrests. “We brought weapons, we brought narcotics and we conducted undercover transactions to target this gang and to develop our way up to the important leadership.”

The Department of Children and Family Services took seven children into custody Tuesday morning during the arrests. Weapons found at Rodriguez’s home were placed into evidence during the operation, Delaney said.

Another five were arrested on state charges of two counts of extortion and one count of conspiracy with a gang allegation on all three charges. The five are suspected of threatening to kill a man, who wanted out of MS-13, unless he paid them.

Mark Inaba, a deputy for the Los Angeles District Attorney’s Office Organized Crime Division, said the victim made two $100 payments in May 2012.

In addition to the 20 indicted, authorities also arrested Candi Pascual on a state bench warrant, officials said in a news release.

If convicted on any of the charges, defendants could face maximum sentences ranging from 10 years to life in prison.