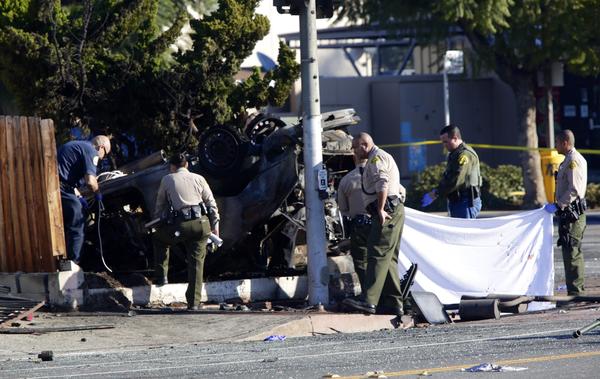 Four people were killed early Saturday following a high-speed pursuit by Los Angeles County sheriff’s deputies that ended when the pursued vehicle slammed into another car, flipped over and burst into flames, authorities said.

The collision occurred about 12:30 a.m. at the intersection of West Greenleaf Boulevard and South Wilmington Avenue in Compton, said Sgt. Peter Ramirez of the Sheriff’s Department.

Deputies responding to a call of shots fired were pursuing a car with three occupants when it struck a gray Monte Carlo with a single occupant, Ramirez said. The impact of the crash caused the car being pursued to flip over and land upside down in the front yard of a home.

The three male occupants of that vehicle died at the scene, Ramirez said. The victims have not been identified.

The occupant of the Monte Carlo, a woman in her 20s who has not been identified, also died at the scene, Ramirez said.

The pursuit began on Indigo Street in Compton when sheriff’s deputies pulled the suspects’ vehicle over, Ramirez said. The vehicle matched the description of one from which shots had been fired earlier, he said.

As deputies walked toward the car, it sped off, Ramirez said. The high-speed chase continued for about two miles, he said.

The suspects’ vehicle was heading westbound on West Greenleaf when it ran through a red light at Wilmington and struck the Monte Carlo, which veered out of control and hit a brick wall, Ramirez said.

The suspects’ vehicle hit the traffic pole, a brick wall and a portion of a neighbor’s garage before landing upside down in flames, he said.

The incident remains under investigation, but Ramirez said there is “strong evidence” that the suspects’ vehicle was the one involved in the earlier shooting incident.

“We do believe this was the vehicle involved,” he said.

Family members of some of the victims were at the scene early Saturday as coroner’s officials removed bodies from the wreckage.

One of the victims was identified as Larry Gilmore, 35, by Keith Wright, who said he was his brother.

“It’s terrible to see two cars so mangled up,” he said.  “My brother’s car is upside down. It’s all burned up. That’s no way for someone to die.”

“He was just out with his friends, and things got out of hand,” he said.