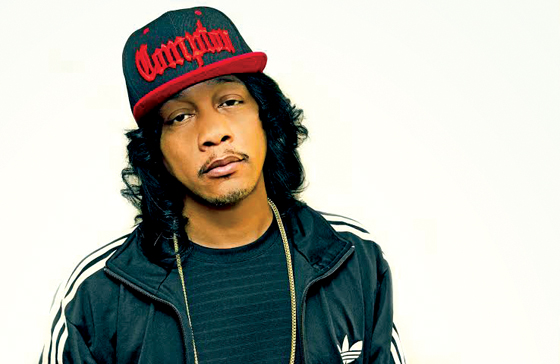 In the conventional rap narrative, a star is born out of the ‘hood, overcoming his circumstances to achieve fame and wealth beyond his dreams.

But he’s then confronted with a choice: Does he remain of the ‘hood?

Sure, he can afford to buy a nice house in the Valley, and he’d be foolish not to. But how often does he come back home? Is he looking out for his former crewmates? Is he still enmeshed in their struggles and drama? Both benefactor and compatriot, he’s expected to save them from drowning and simultaneously swim his way to a gold medal.

No one knows this better than DJ Quik.

The Compton-bred production wizard has been, at times, Tupac’s engineer, Dr. Dre’s beat sous chef, a wanted man in the Biggie Smalls murder and a platinum rapper. Emerging from the scarlet flag–waving Centennial High, he was the first rapper from the Bloods gang to climb all the way to the top of the mountain — or at least the top of Woodland Hills, where he maintains a home.

Today, he parks on 132nd Street on Compton’s northwest side in his black Porsche Panamera, stepping out in a black and yellow polo shirt and braids, looking fit and trim. Emerging from the car with him, in a cloud of cigarette smoke, is rapper TweedCadillac, known for his early-’90s group Penthouse Players Clique, which was signed to Eazy-E’s Ruthless Records.

We’re meeting at Quik’s niece’s house, which is not far from where Quik grew up. Tweed is providing help painting the bathroom; it appears to be a complicated favor trade, allowing Quik to help out his family and perhaps help Tweed, the man Quik credits for discovering him. (Tweed also appears on Quik’s new song “Broken Down.”)

For subject and journalist, meanwhile, the setting keeps the story grounded in its proper context — Compton.

Quik hasn’t been able to pull away, even if he’s wanted to. It’s one thing to remain true to your roots — Quik’s have threatened to strangle him, thanks to a series of complicated family crises.

In 2006, he spent months in solitary confinement for assaulting his sister, who he says convinced her children to extort money from him.

In May 2013, Quik’s daughter, Davieanna Marlena Blake, was arrested in Phoenix on first-degree murder charges in the death of her 2-year-old son. Also arrested was the baby’s father, Darnell Moses Alvarez, who allegedly badly beat the boy after hewet the bed. According to court dockets, they’ve each been indicted on one count of first-degree murder and two counts of felony child abuse, and are scheduled to go to trial in October 2015.

It’s a capital case, meaning they could receive the death penalty.

Quik won’t talk about the situation, other than to proclaim his daughter’s innocence. But this and other personal chaos affected his new album, The Midnight Life. The youngest of 10 kids, he’s long been nearly consumed by a whirlwind of kin and associates who alternately plead for and demand his affections, material and otherwise.

But he’s had enough. “I started saying no,” he explains.

Equally important was eliminating the circus atmosphere in his studio. With all due respect to musicians who do their best work while associates flirt, guffaw and get drunk near expensive mixing boards, Quik’s no longer having that. During the recording of his last two critically acclaimed albums, The Book of David and Blaqout(with Kurupt), there were too many hangers-on.

“I hate motherfuckers in the studio,” he says. “The setting now is as sterile as a fucking hard-drive factory.”

Even the title of The Midnight Life, recorded at Burbank recording studio Little Big Room, reflects his desire to be alone. “That’s the best time for making music and drinking,” he says in the album’s press materials. “It’s quiet, especially if you’re in a recording studio. You can hear everything and you know everybody’s asleep.”

The exquisitely tuned new work is in many ways classic Quik, featuring his goopy, guacamole sound and lascivious lyrics. (“I got a fine groupie girl / Eyes like a raccoon / Pussy so good / She deserves some damn balloons,” he raps on “Fuck All Night.”)

But it nonetheless represents a departure in his standard operating procedure, both in the way it was made (recorded on tape) and the way it’s being released — independently, on his own dime. Royalties from gangsta-era works such as 1991’sQuik Is the Name pay hisproperty taxes but, “to be honest, I haven’t made any money off of records since, like, 2003,” he says.

He hopes to change that on the new work, which has a modest promotional budget and includes features from associates including Suga Free and Mack 10, not to mention production from his son David Blake Jr. on standout track “That Getter.” That songcastigates those who don’t possess his relentless drive.

“Motherfuckers in my neighborhood grew up to be nothing,” he raps. “I went around the world stuntin’, they still there doing nothing.” He says he hopes some of them hear it and realize, “Hey, I’m the slacker Quik is talking about!”

At the same time, Quik feels oddly stung by his own naysayers. He complains at length about a Complex review of “Trapped on the Tracks” from earlier this year that was read by very few and, anyway, mostly complimentary. He devotes equal time to Twitter trolls, who have gone after him, his daughter and his work.

Everything seems to be coming to a head all at once. And while imparting wisdom, getting one’s money right and firming up one’s legacy are standard middle-aged concerns, the situation takes on new urgency for a 44-year-old in hip-hop, where elder statesmen are expected to stay relevant to children who still watch Saturday morning cartoons.

Back at his niece’s house, Quik muses about the struggle between sticking to his artistic guns and trying to stay “relevant” and well paid in today’s climate. One wonders if the kids a few blocks away at his alma mater, Centennial High, are even familiar with the man greatly responsible for the sound of Dr. Dre’s best-selling album2001.

“I’m still helping the new rappers, the new California movement, and I did some pretty significant records that do pay me,” he says. “Am I wealthy? I believe I’m wealthy; I’m just not rich.”

If he were, say, a bluesman, The Midnight Life might simply show him pushing sonic boundaries, maybe offering new material to play for adoring crowds overseas. Instead, it’s practically another audition, a “calling card,” as he describes it.

“I want to be respected for my prowess as a musician and engineer,” he says. “I’m showing my ability to paint pictures with music, using music as the colors.”

That he can do this better than nearly anybody should be obvious; that it’s not is a little tragic. Witness a pair of effervescent jams, “Quik’s Groove 9″ and “Bacon’s Groove” (featuring his longtime collaborator, Robert “Fonksta” Bacon). They’re muscle-flexing masterworks, as satisfying as they are indispensable.

And that, in the end, is how Quik maintains his edge. He knows deep down that evolving means leaving some people behind. Nearly 25 years into his career, DJ Quik has finally surrendered to the music entirely, which means that his family, his material concerns and the younger generations are just going to have to chill.