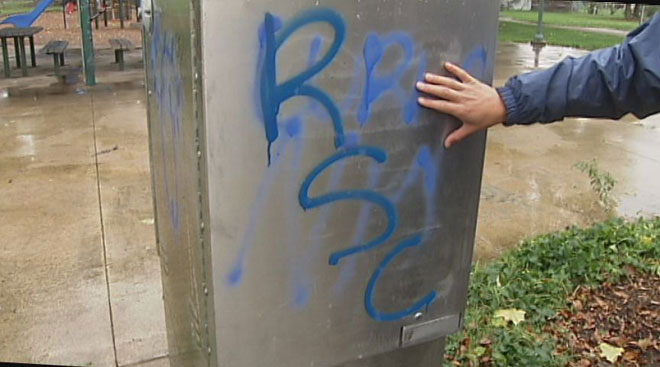 Gang graffiti scrawled on fences, sidewalks and walls in a public park in a neighborhood near

“While you’re going to work, raising your family and taking your children to the park, there’s an element of drama that’s kind of taking place in this neighborhood,” the Eugene Police gang specialist said of Irwin Park in West Eugene.

“Rival gangs are trying to claim sections of the neighborhood. Any time rival gang members encounter one another, there’s going to be trouble.”

On Thursday, police arrested 19-year-old Victor Hugo Martinez for allegedly being the shooter in a gang-related drive-by shooting that occurred on October 13.

Police say Martinez is a member of the 5100 Riverside Crips, one of 25 known street gangs in the Eugene-Springfield area.

“There’s been a big rivalry between several of the gangs this whole summer, and it’s still going on,” undercover EPD Detective Greg Harvey said.

“There’s a Norteῆo crew that was tagging it up during the summer. The Riverside Crips, South Side Playboy Sereῆos graffiti were crossing out each other’s tags almost on a daily basis,” Harvey said. “We were getting fights between them. There were shots fired between them.”

This activity is causing concern for police.

“Several neighbors were calling and talking about the gang activity in the park,” he said. “There was ordinary people going to the park and they were being threatened. Some of them were reporting assaults.”

Harvey said gang activity in Eugene ebbs and flows – depending on who’s been incarcerated. They said residents shouldn’t live in fear, but they’re asking people to be aware – and to call police.

“When something is out of the ordinary where you’re getting a bad vibe, you know they’re probably right. That’s when you contact police,” Harvey said.

Harvey said residents near the park have been great in reporting criminal activity.

They showed KVAL News how to decipher whether graffiti was from a gang.

“Gang graffiti usually sends a message and then is signed by several people,” Harvey said. “Taggers usually care about themselves.”

Harvey said gang graffiti will usually carry area code numbers. If there are four numbers, he says that usually signifies a street block they represent, like the 5100 Riverside Crips. “The 5100 block is the 5100 block of Barger Drive.”

They also said gang graffiti is often crossed out, usually in different colors by rival gangs.

Harvey said Martinez has several markings on homeowner’s fences and on the ground near the playground. “That tag right there with the ‘ese chiefy’ was the Victor Martinez that is arrested.”

Crossing out of letters and names is common, Harvey said. “They don’t want to show respect to rivals and enemies, so even if that means crossing out a letter in their own name, they will do it.”

McKee said gang activity is not only happening overnight. “If people see something suspicious, like gathering or about to fight, they should call police.”

“The majority of fights and shootings don’t get reported,” Harvey said. “Or, police can’t find the suspects or victims when they arrive.”

McKee said the best prevention is education. They said know what to look for and report it.

“We’re not trying to fight them. We want to disassemble them and keep them in control,” McKee said. “The public can help us by spotting graffiti and calling police.”