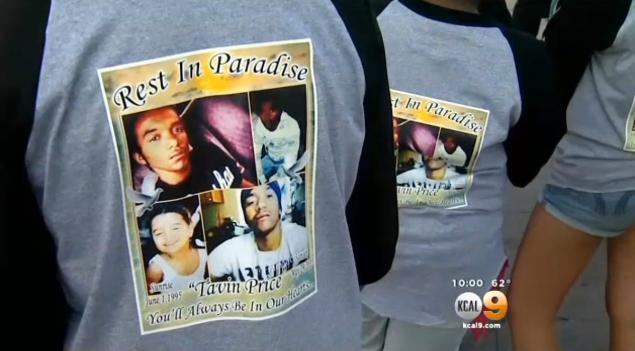 Family members in South Los Angeles were mourning the loss Monday of a 19-year-old with special needs who was shot and killed in front of his mother at a car wash after, according to her,  the teen refused to give up his red shoes.

Relatives and friends gathered at the car wash in remembrance of the slain teen, bringing flowers and balloons and carrying signs to honor the young man. Some wore shirts that read “Rest in Paradise Tavin Price,” though multiple family members identified him as Tevin.  The Los Angeles County coroner’s office later confirmed the victim’s legal name as Tevin Terrell Price.

Price died after being shot multiple times on Friday morning near the intersection of Florence and 11th avenues in the Hyde Park area of South L.A.

The incident began when Price, who had gone to the car wash with his mother, left the business and went to a nearby market to buy cigarettes, according to Det. Eric Crosson of the Los Angeles Police Department. While Price was there, someone approached him and asked the teen about the color of his clothing.

“He was confronted by someone who inquired about his possible gang affiliation because of some red clothing he was wearing,” Crosson said. “He denied being a gang member and went back to where his mother was.”

His mother, Jennifer Rivers, said Price was confronted again at the car wash by someone who told him to take his shoes off.

“He didn’t take them off, he ran to me, and then I said ‘Let’s go,’” she told KTLA on Monday. “And I was getting in the car. Before we can get in the car, the boy ran behind my car and shot him in the back twice and in the chest. ”

After hearing the gunshots, Rivers turned around and chased the fleeing gunman, “I just kept saying, ‘Stop. Why did you shoot my son?’”

Unable to catch him, she then ran back to her youngest child, who told her he did not want to die.

“Watching my son beg me, ‘Mommy, I don’t want to die. I do not want to die, mommy. Help me,’” Rivers recalled, her voice choking up. “That’s hard for me.”

Both police and family members stated that Price was not involved in gangs. Crosson said it appeared Price was “victimized” because he “wore the wrong color in the wrong neighborhood.”

At the vigil, he was described as a fun and loving young man who “loved his family more than anything,” said his cousin, Ceritha Daily

Price was killed just days before he would’ve turned 20 years old, and at one point, those gathered at the vigil sang happy birthday in his honor.

His family has expressed hope that the person who fatally shot Price will be arrested and brought to justice.

“I want to see them spend the rest of their life in jail and feel how our family feels right about now,” Daily said.

The gunman was apparently caught on surveillance cameras in the area, but detectives have not released the video.

Anyone with information about the shooting can call Crime Stoppers at 800-222-8477.