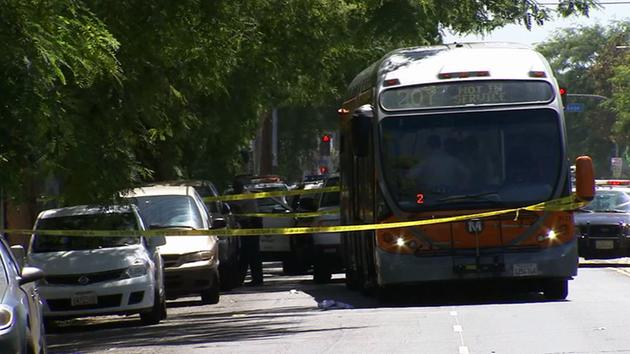 A 30-year-old bus rider suffered a serious gunshot wound to the back Monday in crossfire between two groups of what may have been gang members aboard a Metro bus in South Los Angeles, authorities said.

The man and his wife got on the bus only to find themselves between members of two rival gangs exchanging insults, according to the Los Angeles County Sheriff’s Department.

Paramedics rushed the man to a hospital where he was in serious but stable condition. His wounds were not considered life threatening. There were no other injuries.

Officer Mike Lopez of the Los Angeles Police Department’s Media Relations Section said the incident was believed to be gang related. The gunman, described as in his 20s, got away.

He stood 5-foot-4 and had a medium build. He had a black cap and was wearing blue jean shorts, said Sgt. Paul Valle, of the Los Angeles County Sheriff’s Department, which patrols Metro bus and rail lines.

Authorities were reviewing bus surveillance video, which is standard on all Metro buses.

Metro buses safety has been an issue for years, particularly in high crime neighborhoods such as South LA.

Victor Pineda, who was on the bus when the shooting happened, said he has been afraid to ride “because there’s some people that look like gangs,” he said. “I get scared that they’re going to do something.”

Others say undercover police would help.

“If a sheriff’s deputy is the highest deputies that you can get on that bus to keep passengers safe, put them in a T-shirt, and some jeans, some sneakers, a hat, earphones in their ears,” said Teaira Goggins. “All they need to do is watch.”

But with the city’s murder rate now on the increase it is difficult to separate the mode of transit from what is happening outside.

“The bus is safer than the neighborhood,” said Jackie Taylor, a neighbor. “So it really doesn’t make any difference to me.”