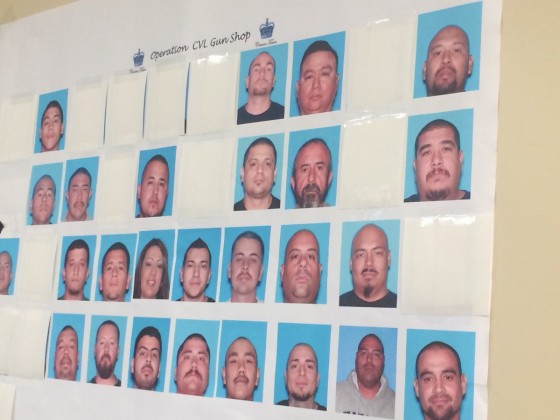 More than 50 people with ties to two criminal street gangs have been arrested in a series of raids carried out in Corona and surrounding areas as part of an operation to crack down on firearms trafficking, officials announced.

In addition to the arrests of 32 people on Thursday, the months-long investigation had previously netted 20 arrests, according to the California Attorney General’s office.

Authorities also seized 67 firearms, $95,700 in currency, and methamphetamine, cocaine, and marijuana with a total street value of $1.6 million.

“The large amounts of narcotics, currency — and most importantly — the large cache of weapons seized, will no doubt disrupt the criminal gangs’ enterprise, thus making our communities that much safer,” Corona police Chief Mike Abel said.

Members of the Corona Varrio Locos and the Mexican Mafia prison gang La Eme were targeted in the sweep, which involved more than 300 law enforcement personnel from the Corona Police Department, Riverside County Sheriff’s Department and California’s Justice and Corrections & Rehabilitation departments.

The individuals taken into custody are facing a slew of felony charges, including firearm assault, extortion, drug trafficking and conspiracy. Officials said that, thanks to today’s busts and the previous raids, a total $1.6 million in illegal drugs were taken off the street.

“Criminal gangs brazenly trafficking guns and drugs on our streets jeopardize public safety and will not be tolerated,” said Attorney General Harris.

The Mexican Mafia controls the drug trade and conducts other illicit activity in state correctional facilities and elsewhere, according to public safety officials.

According to Corona police, Varrio Locos members are active in Corona and other Inland Empire communities. The gang is an offshoot of Surenos, a Southern California gang beholden to the Mexican Mafia.