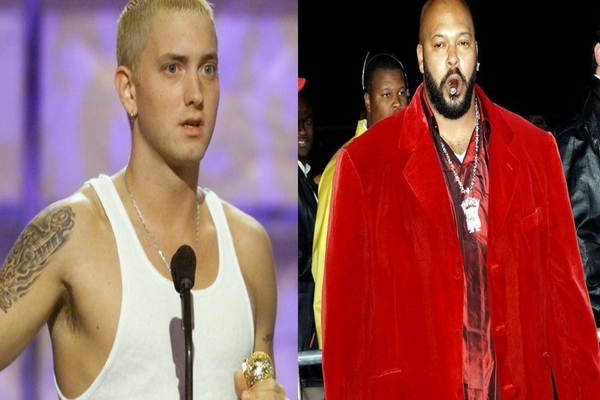 It could be said, perhaps without much resistance, that Suge Knight is one of the bigger villains in hip-hop from the past few decades. The former Death Row boss is currently on trial for murder and has been linked to a slew of other famous hip-hop crimes, and now, Big Naz, a one-time bodyguard for Eminem, reveals in an interview that he believes Knight wanted the Detroit rapper dead.

Speaking with the Murder Master Music Show, Naz says there were several situations in which he feared for both his life and Em’s. “There was a situation at the Source Awards, which was our first encounter with Suge Knight and his henchmen,” he says in the above clip. “They had it to where the artists couldn’t sit with the bodyguards. I notice Em is in the aisle and he is beefing with all these guys in red shirts. This is what they said: ‘Death Row motherfuckers! Suge Knight sent us to strong arm Eminem and it’s going down!’ I had to snatch Em up and call Dre, because he was backstage.”

He continued: “The scariest moment is when we went to Hawaii. When the plane lands we are greeted by 20 Honolulu police officers and they told us that Death Row is here — they tried to hem [Snoop Dogg] up. Suge Knight had sent 50 guys to try to break up the show. When we got there, vacation mode was over, we were lockin’-n-loading, putting on bullet proof vests with their wives and girlfriends sitting next to them. We had to have Interscope pick up the tab to put Honolulu police with each bodyguard, because of how deep Suge was over there.”

If those stories sound familiar at all, in March of 2015, 50 Cent told The Breakfast Club that he believes that Suge was prepared to take extreme measures toward Dr. Dre, saying “Suge was gonna kill Dre.”