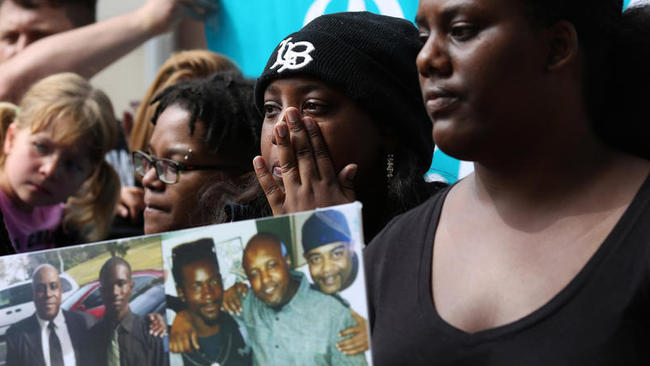 A 27-year-old man who was fatally shot by a deputy after the pursuit of a carjacked vehicle ended in Compton was not involved in the crime that prompted the chase, the Los Angeles County Sheriff’s Department admitted Tuesday, when the victim’s family called for answers.

Photos displayed by his family outside the L.A. County Hall of Administration on Aug. 9, 2016, show Donnell Thompson.

Donnell Thompson was discovered in a residential home’s yard on July 28 while deputies searched for two men who fled a carjacked vehicle after it crashed at the end of a pursuit in which shots were fired at deputies, according to the Sheriff’s Department.

He was unresponsive to commands and then stood up and charged at deputies, prompting one deputy to fire at him, according to a statement issued by the Sheriff’s Department.

The deputy who fired believed Thompson was armed, according to the statement. That deputy has been assigned to nonfield duties amid an ongoing internal investigation.

The victim’s family members spoke before the Los Angeles County Board of Supervisors Tuesday, calling for justice in Thompson’s death. They said he lived in the area where he was killed while unarmed and “minding his own business.”

“My little brother was innocent,” said sister Antoinette Brown. “It hurts me to my heart to … imagine how he was just wrongfully killed that night.”

At an event publicized by Black Lives Matter Long Beach, Brown spoke outside the Hall of Administration as well, her hands trembling as she tired to keep from sobbing. She said her brother was “very kind.”

“That was my love,” Brown said.

The Sheriff’s Department said it was conducting an “exhaustive review” of what led to the shooting.

“The family has expressed some very valid questions and concerns, and there is no question that the Sheriff’s Department shares those concerns,” homicide Capt. Steven Katz said. “We also have concerns ourselves, as a department.”

On the day of Thompson’s killing, the department said deputies stopped a vehicle for a traffic violation and then ran the license plate number, learning it had been stolen in Los Angeles.

As they called for backup from the stop at 134th and Alameda streets, the vehicle took off, prompting a short pursuit during which shots were fired from the vehicle at deputies’ patrol car.

The deputies’ car was struck, and the stolen car — a two-door Honda coupe — crashed about 2:30 a.m. at in the 1900 block of Compton Avenue. One of the people in the Honda got out and pointed a gun at deputies, prompting at least one of them to fire, the department said at the time. The man fled into the surrounding neighborhood.

Amid a search of the area, one suspect was taken into custody at a home where he was hiding in the 2000 block of Slater Avenue. It’s not clear what happened to the second individual who was said to be in the car.

Officials said Tuesday they still have not determined for certain if the individual arrested was involved in the carjacking.

Around the same time the suspect was arrested on Slater Avenue, a resident called 911 to report he found Thompson lying on his front lawn, the Sheriff’s Department said Tuesday.

Nine minutes later, deputies arrived at the home, in the 800 block of Stockwell Street.

“Mr. Thompson was lying in a position that concealed one of his hands from view and was unresponsive to numerous commands,” the department said in Tuesday’s statement. “There was a concern that he may be armed, and may be connected to the carjacking suspect who had fired on the deputies.”

The sheriff’s Special Enforcement Bureau responded after deputies reported the man may be suffering from a gunshot wound and may have a gun lying next to him, according to a timeline provided by the department.

After “various means” were used to try to get Thompson to respond, “he aroused and stood up,” then charged at Special Enforcement Bureau deputies, prompting the deputy’s gunfire, according to the release.

Investigators don’t know what brought Thompson to the home, nor why he charged them, Katz said.

A special session of the Sheriff’s Department’s Critical Incident Review Committee, held Monday, had the primary objective of determining whether Thompson had a role in the carjacking.

No evidence shows he was in the vehicle or involved in the earlier shooting at deputies, according to the statement.