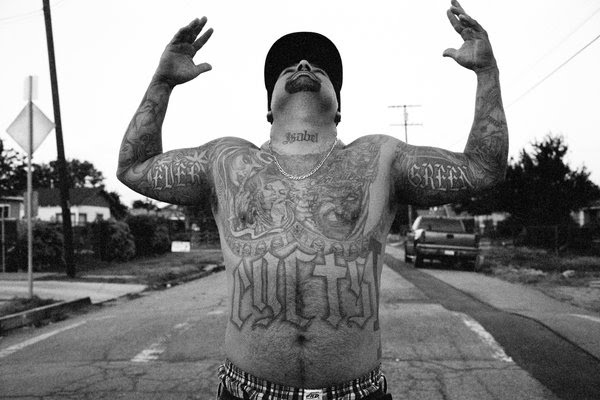 What happened to the “gangbanger,” the figure who ruled hip-hop — and, seemingly, the streets of America’s cities — from the late 1980s to the end of the millennium? Americans projected their racial and social anxieties onto this figure, inflating him into a “superpredator,” fuel for the tough-on-crime policies of the ’90s. By the turn of the century, though, the gangbanger’s power waned in our imaginations, drained by the exploitation of the entertainment industry and by the fact that so many actual gang members had been swept into prison.

No place seemed to epitomize the “gangsta” lifestyle more than Los Angeles, with television and movie portrayals of mostly black and Hispanic gang members transforming Southern California’s laid-back image into one of racialized terror.

There was a reality behind the representation, of course — desperate young people who sometimes caused great harm to others and to themselves, and who might have been only dimly aware of the larger forces pushing them: deindustrialization and globalization disrupting blue-collar paths toward the middle class; the interwoven interests and cynicism of the war on drugs that set many young minority men up to fail; the racial tensions between the police and urban residents. 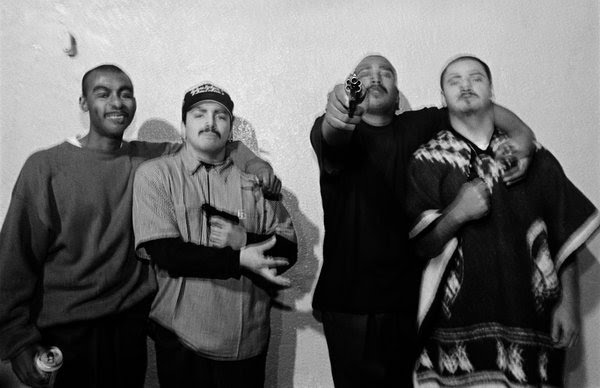 The photographer Joseph Rodriguez arrived in Los Angeles immediately after the 1992 riots that erupted when four white police officers were acquitted of violating Rodney King’s civil rights. Mr. Rodriguez documented the lives of gang members, starting in South Central Los Angeles and eventually arriving in Boyle Heights, a majority Mexican-American district on the East Side, which was in what the Rev. Greg Boyle, a Jesuit priest and the founder of the gang intervention organization Homeboy Industries, called the “decade of death.”

Mr. Rodriguez spent several years on the project, mostly in a neighborhood in the heart of Boyle Heights called Evergreen. The portraits of gang members that emerged were the opposite of the monstrous images in the news media. Yes, there were guns and tattoos, but there was also family, in spite of — sometimes amid — the violence. The photographs captured relationships between mothers and fathers and children and siblings and extended relationships.

In 2012, when Mr. Rodriguez returned to Evergreen to see what had become of his former subjects, gang members were largely absent from the streets. This was partly an effect of a policing strategy in which district attorneys obtained court-ordered injunctions prohibiting gang members from appearing in public together. Some “veteranos” were still languishing in prison. Others had died, victims of violence or drugs. 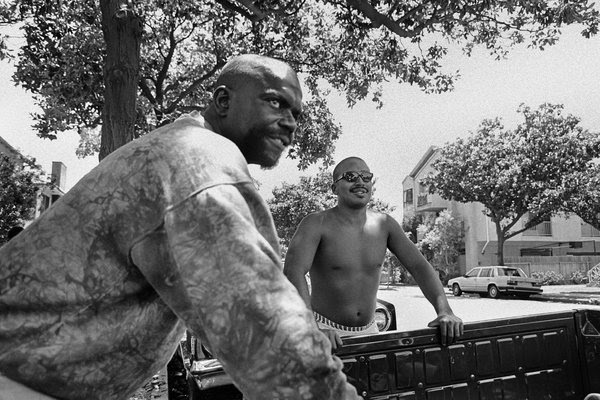 1993: Steve Blount, one of the few African-American members of the Evergreen gang, left, with his son, Steve Jr. Steve Jr. was killed in a gang-related homicide in 1998.JOSEPH RODRIGUEZ

Not everyone had disappeared, though. Steve Blount, an original member of the Evergreen gang and one of the few African-Americans in Latino gangs, was still around. In Mr. Rodriguez’s early photographs, Mr. Blount appears as a wounded warrior, addicted to heroin and enduring one loss after another — the deepest when his son Steve Jr. was killed in a gang-related homicide in 1998. The father had barely gotten clean when he buried the son.

“I cried every day and every night,” Mr. Blount said. “I woke up every morning crying, asking God when it was going to stop.” Later, he buried his wife, Chris, a fellow addict who died of liver disease. With the pain came the realization that his life was also on the line. “I could have been dead — through gang violence, overdose,” he said. “The fact that I’m still here, I know he has a plan for me.”

When I met him last summer, Mr. Blount was living in comfortable retirement in a high-rise building on Bunker Hill, in downtown Los Angeles. From his apartment on the 29th floor, he had a panoramic view of the city, including the rapidly crowding skyline of downtown and the gentle rise of land east of the Los Angeles River — Boyle Heights. He still crossed the bridge to the old neighborhood several times a week to check in on family (he has seven grandchildren and one great-grandchild). But even if he wasn’t at risk of repeating his own history, he still felt as if he was shuttling between worlds. “For me to come over the bridge is like a double life,” he said. 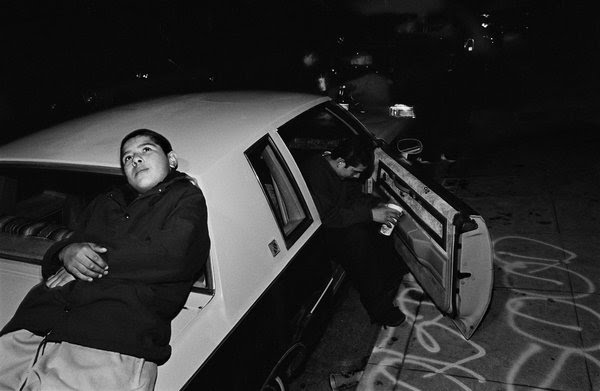 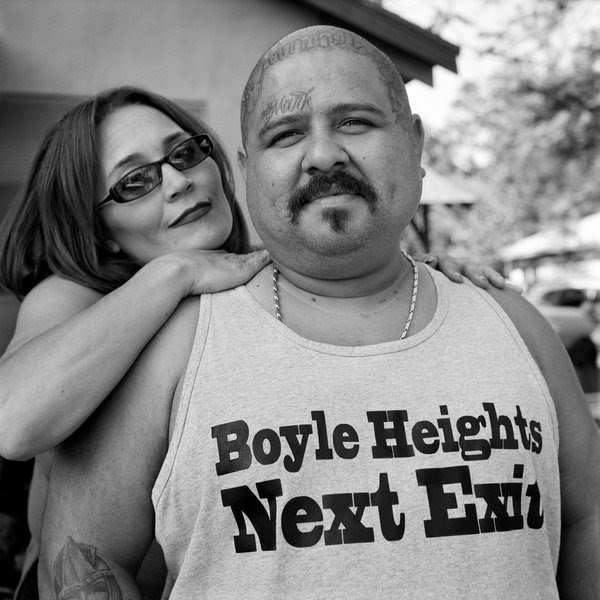 2016: Mr. Olvera with his wife, Veronica.JOSEPH RODRIGUEZ FOR THE NEW YORK TIMES.

Then there are the survivors who seem much closer to the edge, like Mark Olvera, who was barely a teenager in 1992. When I met Mr. Olvera at his wife’s family’s house, he was dressed very much in ’90s “homeboy” gear — backward baseball cap, gold chain, T-shirt and shorts, and with plenty of visible tattoos, including a prominent “EG” (for Evergreen) on his temple. He’d been in and out of jail since he was 14. Now at 36, he’d been out of prison for about five years.

Hailing from a family that had lived in Evergreen for three generations, he took pride in his life with Veronica, his five children, and his steady work as a union painter. “I respect life, I let the living live,” he said. But he also seemed to describe a double life: “Just don’t crack my eggshell. I speak as a father from the lifestyle.” 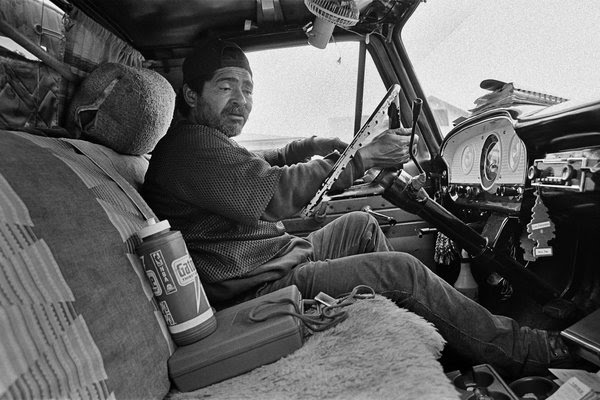 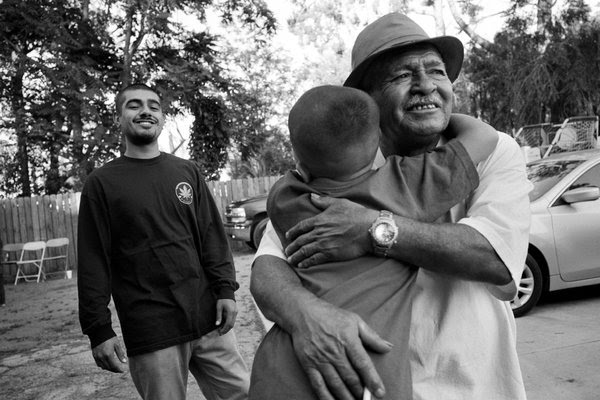 2016: Albert Olvera with his grandson. Though Mr. Olvera was determined to avoid heroin after his release from jail in 1996, he continued to drink until he was found in a coma in his truck, a turning point.JOSEPH RODRIGUEZ FOR THE NEW YORK TIMES.

The Gangs of L.A.

Most of the talk about and in Boyle Heights these days has nothing to do with gang members, gang victims or survivors. For several years the galvanizing issue has been gentrification. After the opening of Metro train stops in 2009, wine bars and art galleries predictably began to appear, and the booming Arts District downtown seemed poised to hop eastward over the Los Angeles River. Some of the new businesses were owned by Mexican-Americans; many were not. 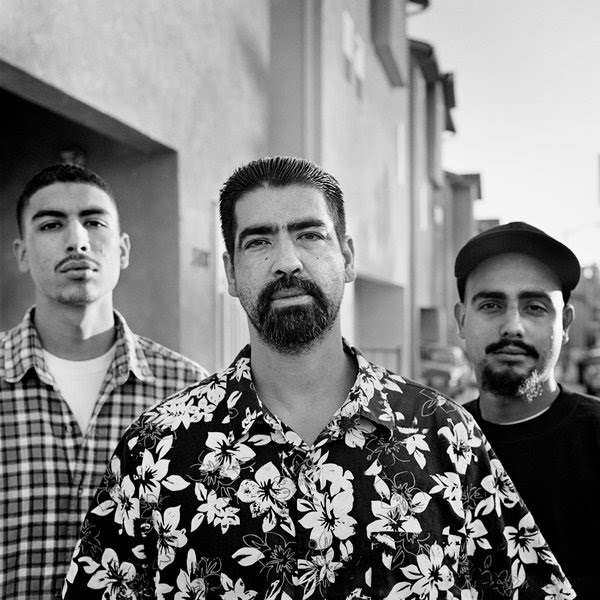 2012: John Aguirre, center, an Evergreen veterano known as Gypsy, with his sons Brian, left, and John John. Mr. Aguirre has been an electrician for over two decades and today his sons work for him.JOSEPH RODRIGUEZ

The Gangs of L.A.

At the same time, Boyle Heights in 2016 experienced a significant spike in gang-related violence — as well as officer-involved shootings — after years of historic lows. “Is it a response to the instability?” asked Abel Salas, the editor and publisher of the community newspaper Brooklyn and Boyle. “Maybe the homies don’t realize their days are numbered. Like an endangered species, when your back’s against the wall, you turn kind of rabid.” 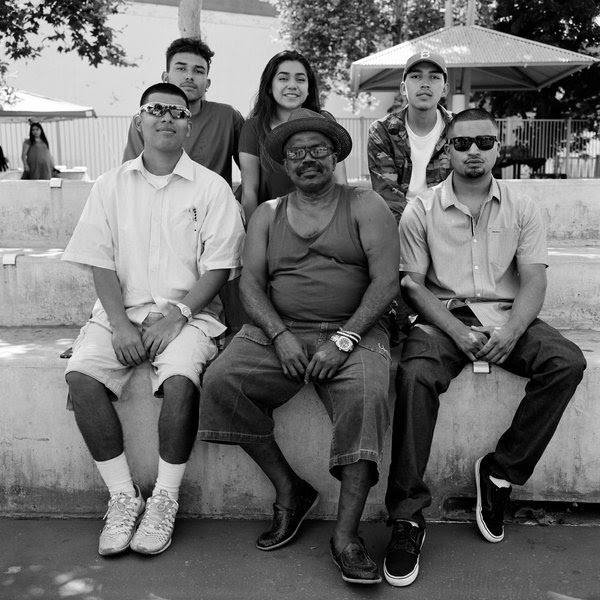 Steve Blount with his grandchildren.JOSEPH RODRIGUEZ FOR THE NEW YORK TIMES

Demonstrations and community meetings about gentrification are a neighborhood fixture these days. The topic of gang-related violence rarely surfaces. This collection of photographs reveals what has been erased, placing the men back in the landscape of a neighborhood undergoing tumultuous change — and one where their memories run deep. https://www.nytimes.com/