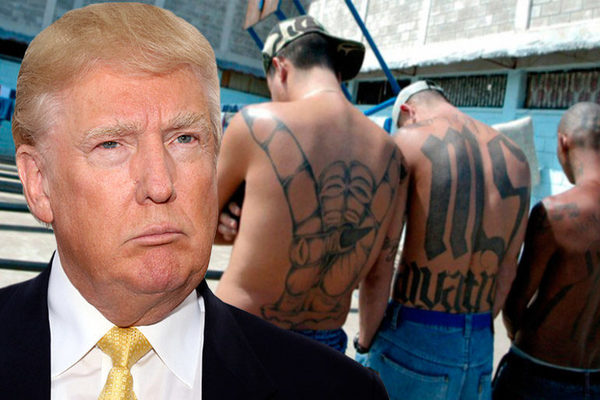 President Donald Trump and his top immigration enforcers have begun to focus their attention on the deadly MS 13 gang, saying the administration’s hardline immigration policies are focused on stopping its spread in the US.

“MS-13, you know about MS-13?” Trump said at a speech before the National Rifle Association Friday in Atlanta. “It’s not pleasant for them anymore. That’s a bad group. Not pleasant for MS-13 — get them the hell out of here, right? Get them out.”
But the truth about the gang, the first street gang to be labeled a “transnational criminal organization” by the US government, is more complicated — and experts say using MS-13 to justify cracking down on undocumented immigrants could actually make the gang stronger.
Mara Salvatrucha, known as MS-13, is strongest in Central America, especially El Salvador, but extends its criminal enterprise across the US, including cities like Los Angeles, New York and the Washington, DC, region.
But MS-13 actually began in Los Angeles in the 1980s during a flood of Salvadorians fleeing to the US. Its offshoot in Central America took hold when many of the members were deported by the US back home, according to a University of Pittsburgh research paper hosted by the Department of Justice’s National Criminal Justice Reference Service and a study by the UN Office of Drug and Crime.
While it’s unknown how much of the Central American strength of MS-13 was homegrown, a Congressional Research Service analysis of MS-13 found that its ranks were continuously strengthened by deportees from the US returning home, even as members also migrated to the US.
On immigration, Trump has plenty to show in 100 days
As part of its heightened rhetoric against illegal immigration, the Trump administration of late has spotlighted MS-13 as a sort of public enemy No. 1.
“The weak illegal immigration policies of the Obama Admin. allowed bad MS 13 gangs to form in cities across U.S. We are removing them fast!” Trump tweeted earlier this month.
Attorney General Jeff Sessions spoke in Long Island, New York, on Friday to call attention further to the gang, calling MS-13 “one of the gravest threats to American public safety.”
The choice of Long Island as a backdrop was no accident — in March, prosecutors announced an indictment against 13 alleged MS-13 members, charging a group of them with the September murder of two girls, who were beaten with baseball bats and machetes as they walked home from school. Of the 13 named in the indictment, 10 were in the country illegally, US Attorney for the Eastern District of New York Robert Capers said.
Sessions met after his speech with the families of the two girls, a a DOJ spokesman said.
“We cannot continue with this transporting across our border, illegal immigrants who have not been properly vetted and actually are part of criminal organizations,” Sessions said. “The MS-13 motto is ‘kill, rape, and control. … That should tell us enough about the kind of group that we confront.”
Sessions has also blamed the Obama administration for a rise in MS-13, saying a large number of the gang members are undocumented immigrants, including some minors, in an interview this month with Fox News’ Tucker Carlson.
At the time, Sessions suggested they could be designated a terrorist organization.
“I think so, perhaps, I believe it could qualify for that,” Sessions said when asked about the designation.
But Sessions backed off slightly from that on Friday, saying while the group meets “some of the qualifications,” he is not sure it what all the “standards for that designation” are.
He also insisted Friday it was not “anti-immigrant” to go after the group.
Experts, however, say there is little statistical evidence that MS-13 is more prevalent in recent years or more dangerous to the US than other gangs. Their methods are particularly brutal, experts say, and in recent months several high-profile gruesome killings have made news across the nation.
“This attitude that there’s a brand new threat and it’s new and it’s all immigration, there is not a piece of that narrative that is accurate,” said Jorja Leap, an anthropologist and longtime gang researcher at UCLA.
And the notion that the Obama administration ignored MS-13 is also hard to prove with data. It was the Obama’s Treasury Department in 2012 that sanctioned the gang as a transnational criminal organization.
According to data provided to CNN by Immigrations and Customs Enforcement, recorded arrests by ICE of MS-13 members have fluctuated but seen no steady drop-off for the past dozen years.

There were roughly 24,000 MS-13 members in Central America in 2012, according to an analysis by the UN Office on Drugs and Crime.
Today, the Justice Department estimates roughly 30,000 members worldwide and more than 10,000 in the US, a number that has held steady for some years but that the department believes is trending upwards. MS-13 is active in 40 states plus the District of Columbia, the department estimates, and has found in recent investigations that gang leaders in El Salvador are directing US cliques to become more violent.
But DOJ and the Department of Homeland Security were not able to provide information on how many of those 10,000 were estimated to be in the US illegally, nor how many had been arrested or deported in recent years. There are roughly 11 million undocumented immigrants in the US. And per the FBI’s most recent statistics, the roughly 10,000 MS-13 members are a fraction of the estimated 1.4 million members of US gangs nationally.
Last fiscal year, Homeland Security Investigations, a division of ICE that conducts investigations and has a unit focused on gangs, arrested 429 members of MS-13, according to data provided to CNN. That year, ICE arrested 114,434 individuals in total. In FY15, 322 MS-13 members were arrested by HSI out of 125,211 total arrested by ICE. In the current fiscal year, which began last fall, 253 MS-13 members have been arrested.
Trump admin rolls out immigration-related crime victims office
ICE’s other arresting agency, Enforcement and Removal Operations, does not track arrests by MS-13 and has no data on the gang.
Leap says the gang has earned a reputation above others in the US not because it is more dangerous, necessarily, but because its violence is known to be particularly brutal, because it is one of the rare gangs that operates internationally, and because in Los Angeles it was the only gang to not observe “prison discipline” — the customary pause in rivalry among gang members who were incarcerated.
She added she was “suspicious” of the increased attention on the gang.
“It’s not to say that the gruesome crimes have not occurred, I just question why they’re being highlighted now,” Leap said. “It’s troubling. Gang crime is always on people’s minds, brutal crimes are always on people’s minds, why here, why now, and why attribute it to immigration?”
ICE spokeswoman Danielle Bennett said the agency has long been concerned about MS-13 because of the role it plays in cross-border crime, even when the gang members are US citizens.
“They’re a very, very violent gang that has ties to the border involved in human smuggling, extortion, drug smuggling, with a lot of the money flowing back to fuel the violence in Central America,” Bennett told CNN. “So I think for us that’s why they’re such a target to go after.”

Much of the concern about MS-13 in recent years is anecdotal — with particularly heinous murders occurring across the nation.
In Montgomery County, Maryland, just outside Washington, Capt. Paul Liquorie, director of the Special Investigations Division, said that his jurisdiction has seen roughly 10 MS-13 related killings since June 2015.
In his region, he said, the number of homicides linked to MS-13 members are roughly equal to the number of homicides linked to all other gangs put together, though that does not speak to other kinds of gang operations or size.
But while Liquorie appreciated the federal government wanting to help local law enforcement fight the gang, he questioned whether DOJ was actually undermining its cause by equating MS-13 to undocumented immigrants.
“Undocumented immigrants are more likely, generally, to be the victim of gang crime to be a member of the gang,” Liquorie said.
Undocumented immigrants are especially vulnerable, he said. They tend to lack stable family or work in their communities, are often paid in cash, and can fear reporting crimes to the police for fear of deportation. MS-13 preys on that vulnerability, targeting immigrants for extortion and manipulating minors into joining their ranks.
The Trump administration’s rhetoric and aggressiveness toward undocumented immigrants can help drive that, Liquorie said.
Immigration arrests rise in first months of Trump administration
“The silence in the community, which is driven sometimes by the message from the Trump administration, helps the gang thrive, because you’re further alienating that community that is victimized the most,” Liqourie said. “So it makes use harder to reach out and gain the trust of those communities.”
Eric Olson, an expert at the Wilson Center’s Mexico Institute, said it was appropriate for the Justice Department to focus on MS-13 — but not at the expense of other gangs and cartels that play a bigger role in drug smuggling, for example.
“Are they a bad group of people who extort? Who murder? Yes,” Olson said. “But, they’re involvement in the transnational movement of drugs is not so clear, not so vivid. … I think we shouldn’t focus on one group. We should see the big picture.”

CNN’s Leyla Santiago in Mexico City and Laura Jarrett contributed to this report.