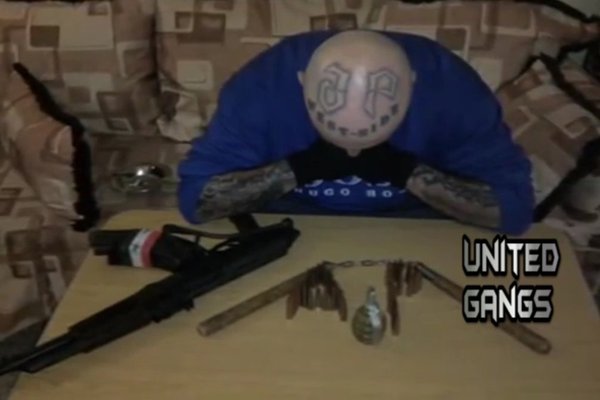 The Armenian Power 13 (AP13), also known as the West Side Armenian Power 13 (WSAP13) or Armenian Mafia are an Armenian-American street gang founded in the Little Armenia community in the East Hollywood district of Los Angeles, California. They are known for their connections with Mexican, Black, Italian and Russian organized crime groups.

Foundation and Early History
The Russian Mafia is usually credited with being the driving force behind Armenian Power. In the late 1980s, smaller groups of gang members began taking over several neighborhoods throughout the city of Los Angeles. Strong connections with Eastern criminal families guaranteed a steady flow of supplies, which allowed the group to grow.

At first a youth organization, Armenian Power soon evolved into a more complex criminal enterprise. Members of the gang would start asking for protection money from local business, eventually forcing their owners to hire private security agencies or seek the help of the city’s police force.

By the mid 1990s, Armenian Power had grown to include more than 200 active members. Albeit being relatively small when compared to other groups, the gang still managed to make itself famous. In 1997, police estimated that members of this association had successfully completed at least 12 drive-by killings.

From 2000 to 2010
As the gang kept growing, law enforcement agencies turned their attention to Armenian Power’s activities throughout the State of California. At first only responsible for petty robberies and less violent crimes such as illegal gambling, the group had moved to more taxing activities.

Frauds and lethal assaults became the preferred modus operandi for these criminals. Armenian Power would soon find itself in the middle of large extortion rings, with prostitution and drug trafficking also accounting for most of the group’s income.

Violent conflict also became the norm, as the gang expanded to new territories. Most notably, members of Armenian Power would spend a large portion of the decade fighting Latino street gangs for control of the city of Los Angeles. Several public killings, including that of a 17-year-old Latino student in front of a local High School, brought the group to the attention of the media.

3 weeks later, 37-year-old Armen Petrosyan (aka Silent), a longtime leader and co-founder of Armenian Power, was gunned down at an Armenian restaurant, Souren’s Deli on Hollywood Boulevard by 17-year-old Jose Argueta, a member of White Fence, a Sureno street gang.

On April 3, 2010, Nerses Arthur Galstyan, and fellow members of the Armenian Power 13, gathered at the Hot Spot Cafe Mediterranean in Valley Village in Los Angeles to celebrate the life of a friend who was killed in a car accident in 2009. Tired of being the gang’s flunky, after retriving a gun from his car, Galstyan returned to the establishment and open fired.

Vardan Tofalyan, 31; Hayk Yegnanyan, 25; Harut Baburyan, 28, and Sarkis Karadjian, 26; were killed. The two surviving victims; one lost an eye, and the other has a bullet lodged two inches from his spine. According to witnesses, before fleeing, Galstyan stood over the bodies and continue shooting.

In 2016, Galstyan was convicted of multiple murders including two counts of attempted voluntary manslaughter –barely escaping the death penalty– and was sentenced to life in prison. In the Armenian community, this shooting is viewed as a disgraceful act; often compared to the Armenian Genocide, during the early 1900s.

Mher Darbinyann And The Mexican Mafia

Armenian Power’s leader and co-founder Mher Darbinyann, also known as “Capone” and “Hollywood Mike,” is credited with orchestrating an alliance with the Mexican-Mafia. The Armenian Mafia, although not Hispanic, identify themselves as Sureños by adding “13,” or X3 (the 13th letter in the alphabet is “M”) to their name.

In November of 2014, Darbinyann, was convicted of 57 criminal counts, including extortion, racketeering conspiracy, extortion, aggravated identity theft, bank fraud, among others, and was sentenced to 32 years in prison.

Operation Power Outage and the Syrian Civil War
In an effort to stop Armenian Power from growing larger, local and federal agencies began pooling resources. The result would be a large-scale operation known as Power Outage. More than 1000 agents from the ATF, the DEA, and several local police departments executed arrests throughout the state.

It took these agencies roughly two years of investigations to locate and identify members of the gang. By February 16th 2011, about 100 members of the eastern gang were taken into custody on a large array of charges. Credit-Card fraud, marijuana cultivation, robbery, and extortion were among these.

Severely weakened by the outcome of the aforementioned operation, members of Armenian Power scattered, either quitting their criminal careers or moving back to their ancestral homes. In 2014, two Los Angeles gang members were seen taking part in one of the battles of the Syrian Civil War.

The two men were later identified as Nerses “Wino” Kilajyan (of Armenian Power) and Sarou “Creeper” Madarian (of Grumpy Winos 13). On August 22, 2015, both men were killed fighting on the side of Bashar al-Assad, according to Livebreak.com