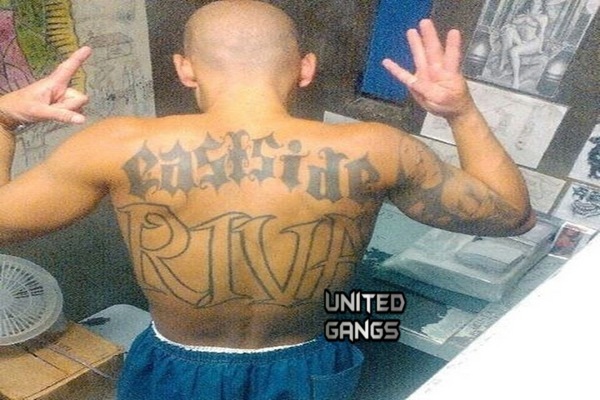 The Eastside Rivas (ESR), is a coalition of several Hispanic-American street gangs and cliques located in the Eastside Neighborhood of Riverside, California. They fall under the Inland Empire (IE) umbrella and are arguably one of the largest street gang in the Riverside County. The word Riva, is short for Riverside (Riverside 13) and is commonly used by Latino street gangs such as the Westside Riva and the Dog Town Riva.

Some cliques and subsets of the Eastside Rivas have a hierarchical structure, which is similar to the Italian Mob. For instance, the Patterson Park is the lowest ranking clique of the ESR and members tend to act as foot soldiers. Members are promoted to the Traviesos clique before graduating to the Tiny Dukes, the highest ranking clique of the Eastside Rivas. Each clique also has its own president who oversees the day-to-day operation of the gang.

In 2007, Riverside County District Attorney Rodric Anthony Pacheco also known as Rod Pacheco who is credited with establishing the Riverside County Gang Task Force (GTF) in 2006 filed a gang injunction against the Eastside Rivas, barring members from congregating in the “University corridor” area of Riverside.

On Friday, August 31, 2007, at 10:00 PM, Gang Detectives and SWAT Officers from the Riverside Police Department executed a Search Warrant at the home of Chandler William Cardwell, a member of the Eastside Rivas after running a classified ad in the Riverside Press-Enterprise.

The ad listed “Big Blowout, Going Out of Business” and included Rodric Anthony Pacheco telephone number and address and stated the proceeds would go to a memorial fund in his name. Caldwell was charged with threats to a public official and gang enhancements.

in 1990, the Eastside Rivas Tiny Dukes formed a brief alliance with the 1200 Block East Coast Crips after a gang meeting at a local Park. The two gangs were bonded by mutual enemies, which included the Casa Blanca Gang and the Casa Blanca Gangster Crips located in Central Riverside.

This act of defiance resulted in the Tiny Dukes being placed on the Mexican-Mafia’s “Green-Light” list. Which means, they are rivals of all Sureno gangs and they are to be attacked on sight in prisons. The Tiny Dukes eventually joined forces with the Mexican Mafia after their president body was discovered in an abandoned car with multiple gunshot wounds.

In 1991, the Eastside Rivas were in a violent war with the 1200 Blocc East Coast Crips, resulting several innocent people being caught in the cross-fire. In 2002,  15-year-old Markess Lancaster (black) was shot dead by an Eastside Riva after being mistaken for a member of the East Coast Crips.

In 2012, Lareanz Simmons, a 14-year-old Riverside Poly High School student was shot while walking to his grandmother house, where he collapsed in the driveway and later died in a hospital. The Riverside District Attorney Office labeled these incidents as racially motivated Hate Crimes and placed both the Eastside Rivas and 1200 Blocc Crips on permanent gang injunctions.