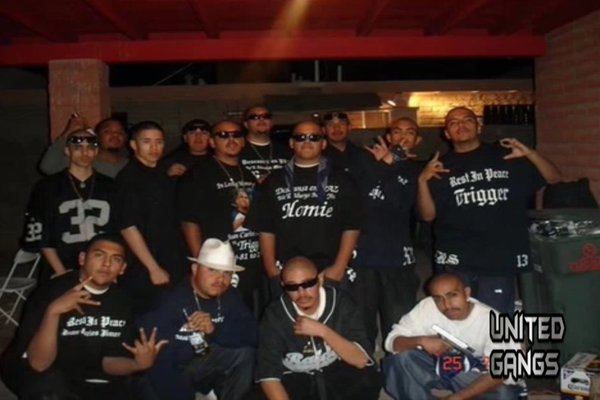 The Easy Riders (ERS), also known as the EZ Riders are a Mexican-American Sureño criminal street gang established in the 1970s, with geographical cliques located throughout the city of Los Angeles, California. The Easy Riders operate in the West Adams and Central region of Los Angeles, which its members refer to as “Easy Town” and are known to sport apparel by the Oakland Raiders (to signify their gang affiliation). They are not to be confused with the Crazy Riders (CRS), which is a completely different Latino street gang operating in Central Los Angeles.

Their barrio stretches from Crenshaw Blvd to Arlington Ave between Washington Blvd and 30th Street. Their notable cliques are the 28th Street Chicos, 27th Street Malos and the Gatos Little Gangsters. The Easy Riders are also known as the Easy Riders 13 or South Side Easy Riders 13, due to their alliance with the Mexican-Mafia (a notorious prison gang). Young Trigger, also known as “Youngster” was a Chicano rapper from the Downers clique of the Easy Riders who died in a fatal car crash, in 2007.

The Easy Riders are allies of the Ghetto Boyz and the Mexican-Mafia. They also align themselves with S4M (Sex 4 Money) and together they feuded with the Playboy Gang, Drifters 13. West Blvd Crips, Indiana Dukes, and the 18th Street Gang. However, their arch enemies are the Varrio Harpys Gang (especially the Dead End clique), who is held responsible for the majority of drive-by shootings against members of the Easy Riders Gang. At one point in time, this rivalry was so tense that any allies of the Harpys, were considered rivals by the Easy Riders. They also forbid any of their members from socializing or interacting with rival gang members.

For instance, on February 2, 2011, an 18-year-old female member of the Easy Riders Gang was scheduled to be disciplined and possibly being voted off the barrio for dating a member of the Harpys Gang. A gang meeting was set, to discuss consequences and repercussions for socializing with rival gang members. However, she never made it to the meeting, her body was found in an alley with ten bullet wounds from a semi-automatic handgun. The gruesome murder scene startled local residents and homicide detectives who believed the shooting was done by a rival of the EZ Riders.

Los Angeles police officers later arrested and charged one of her fellow homegirls from the barrio (Easy Riders), with murder. She was sentenced  to twenty-five years to life on the murder charge and a consecutive 25 years to life for the gun use enhancement. Two other members of the Easy Riders Gang were also sentenced to life for their participation which included orchestrating the calculated murder of the 18-year-old female. “A person who socializes with a rival gang member, usually [ends] up either being beaten to the point of death or killed” according to a Los Angeles police officer.