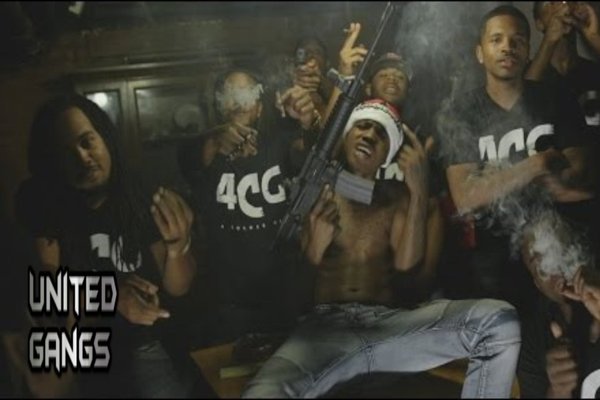 The Four Corner Hustlers (4CH) were born by the end of 1968, mostly thanks to the efforts of Vice Lords’ Walter Wheat and Freddie Gauge. The two young African-Americans sought a way to protect their home territory, a narrow strip of land in Chicago’s West Garfield Park, from the influence of external gang members who would use the area for drug trafficking and violent crimes.

At first a group of less than 10 people, the Four Corner Hustlers were designed as a fighting gang – a sort of self-protection effort – rather than a group which would engage in criminal activities or actively attempt to disrupt the life of its neighborhood.

Drug trafficking and usage of illegal substances were strictly forbidden, but shoplifting and violence were often considered an effective way to assert dominance over rival groups. Albeit tight, the gang remained small and rather unorganized for most of the 70s.

The Late 70s: People Nation
Following a shootout which took place at a Valentine’s Day party in 1972 and other criminal activities dating up to 1975, both original founders Wheat and Gauge were sentenced to spend somewhat long periods in prison and transferred to a federal penitentiary to serve their time. With both heads severed off, members of the Four Corner Hustlers began mixing with heroine and other substances that their former bosses had forbidden.

While in prison, the Hustlers’ leaders realized their need for additional protection and cooperation. Their group may have been successful in the past, but had no chance to match the strength of other larger associations such as the Vice Lords or the Black Gangster Disciples.

In an attempt to mitigate violence and guarantee their own personal survival, the duo drafted a truce which would stop all conflict both on the streets and within the prison system. In 1978, when the People Nation alliance was formed, Four Corner Hustlers would gather under the Vice Lords banner. The results were a change in colors, a standing peace with the Lords, and an en-mass conversion to Islam.

From the 80s to the 90s
The 80s saw a further detachment of the gang from its former generals, as members engaged in even more drug trafficking and moved to other substances. Freddie Gauge, who was still in prison at the time, died while behind bars one day prior to his scheduled release. The 29 year old gangster celebrated his approaching freedom by drinking a lethal dose of homemade spirits.

It would be another of the gang’s original members, Monroe Banks, who took the reins of the Four Corner Hustlers after Gauge’s passing. Starting in 1986 and from most of the 90s, the gang found new sources for profit in the sale crack cocaine. Banks would invest these capitals to reform the group, eventually enlarging his empire to include more than 18000 members.