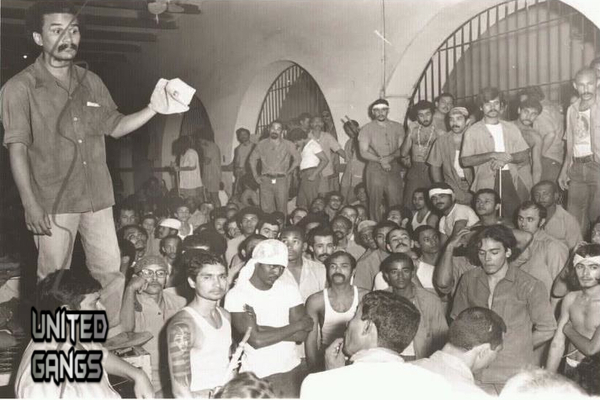 The Ñeta Association, also known as Las Netas or simply Netas was first formed at some point during the 1970s in Puerto Rico. Multiple prisoners, among which Carlos Torres “La Sombra” Irriarte could be found, came together while serving their sentences in the Oso Bianco Maximum Security Prison.

The main plan behind this decision was to create a sort of mutual assistance group which aimed at protecting inmates from both guards and other prisoners. Conflict with other prison gangs also requested the creation of a united front, if these people were to survive. Fighting would continue for most of the 70s, eventually seeing the Ñetas emerging as the most dominant gang in the prison.

In retaliation for the fighting, members and leaders of the G27 gang started plotting to murder La Sombra. After much planning, the gang leader was eventually stabbed and then shot to death on March 30th 1981.

After Irriarte’s Murder
Investigations into the murder found out that the leader had most likely been betrayed by some of his highest ranking officers. These individuals, who wanted to expand Ñetas’ activities to include drug trafficking, likely planned the murder as a way to remove Irriarte, since the leader had always strongly opposed their decision.

Enraged and bloodthirsty, members of the Ñetas assaulted and took over several parts of the prison. That would be their first move in a much larger plan to get back at the G27. Subsequently, the group spent a few days planning their attack: they would gain access to G27 leader’s cell and stab him over 150 times. His body would then be chopped into 84 different pieces, some of which have been sent to a selected group of recipients including the prison warden, the victim’s mother and key members of the enemy gang.

The media coverage deriving from such act was key to Ñetas expansion in the United States. Using the press, members of the gang managed to establish contact with other individuals who were being detained at different facilities. By the 1990s, chapters of the Ñetas existed throughout most of the US East Coast, as well as in Canadian and Spanish prisons.

In Contemporary Times
The Ñeta Association still retains extreme levels of strength in all of their territories. In Puerto Rico, for instance, Ñetas control most of the local correctional facilities, acting as a sort of internal police force. The majority of their activities behind bars revolve around denouncing and exiling sex offenders, pedophiles, and abusers. Ñetas also administer violent justice when required.

In other parts of the Americas and of the world, members of the group still function as a standard criminal enterprise, researching and enacting new ways to increase the group’s influence and income.

From 2001 to 2010, several individuals with ties to the Ñetas association have been either under investigation or were arrested by police. On May 6th 2009, one of the group’s drug dens was located and raided. Law enforcement officers managed to recover more than 150 kilograms of Cocaine and 200 kilograms of marijuana.