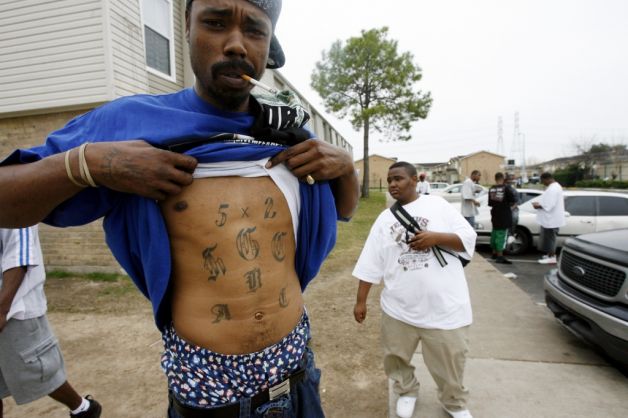 Jovial bravado reportedly quickly turned into stunned silence Thursday afternoon as nine of the 12 Hoover Crips members targeted in a multi-agency raid in Ardmore early Wednesday read the charges against them.

Ricky McGee, Norman Dimitri Washington, Kendrick Jackson, Shu’Vari Johnson, Lawrence Douglas Jr., Daryl Williams, Michael Williams, Rico Murph and Juan Murph, also known as Juan Kemp made initial appearances in Carter County District Court via television from the Carter County Detention Center. The group appeared before Special District Judge Thomas Baldwin, who set bonds of $300,000 each and stipulated those who made bonds would only be released from detention only after being fitted with an ankle monitor.

The nine face conspiracy to violate the Oklahoma racketeer-influenced and corrupt organizations act. The charge is a felony and alleges they along with “other co-racketeers both known and unknown” and affiliated with the “Hoover Crips gang of Ardmore” conspired to violate the racketeering law “by agreeing to the overall objective of said gang to conduct or participate in, directly or indirectly the affairs of the enterprise through a pattern of racketeering activity … and conspiring to engage in the types of felony conduct enumerated under 22 O.S. 1402 (10) with said gang having a history of engaging in such felonies including but not limited to

n Assault with a dangerous weapon

n Intimidation of a witness

n Possession of firearm while in commission of a felony

n Robbery with a dangerous weapon

The names of Washington, McGee, Douglas, Daryl Williams and Michael Williams, Jackson, Rico Murph and Juan Murph, aka Kemp, also appear in on the second count — violation of the Oklahoma Racketeer-influenced and corrupt organizations act. The charge alleges the men as members of the Hoover Crips gang of Ardmore participated “… directly or indirectly through a pattern or racketeering …. ” and “… participated by engaging in, or soliciting, coercing or intimidating another person to engage in the types of felony conduct … related to the affairs of the enterprise.”

The charge sets out the “affairs of the enterprise” as

Required crimes are described as assault, intimidation of witnesses, possession and distribute of CDS, use of vehicle, known as drive-by shootings, possession of firearms in commission of felonies robbery with dangerous weapon and first and second-degree burglary, as well as knowingly concealing stolen property.

The information continues that once a person is an active member of the gang the person is expected to continue to “put in work.” Gang members are encouraged to commit burglaries in order to acquire more guns to protect the gang, as well as commit violent crimes to further the organization and establish its’ reputation, as well as cause fear among other gangs and citizens. In addition, the charge asserts such a reputation throughout the community benefits the gang because it decreases the likelihood witnesses will cooperate with police or testify against them.

Failure to commit crimes and engage in gang activity results in “court” were senior members of the gang hold members accountable for actions. Gang members found guilty are subjected to physical beatings, loss of reputation and standing. Finally the information explains Hoover Crips are expected to maintain a code of silence and never cooperate with law enforcement. Members who become victims of crimes are expected to honor the code while the gang seeks revenge for the crimes.

“Senior members of the Hoover Crips routinely examine court documents from Crater County District Court in an effort to determine who might be cooperating with law enforcement,” the document states.