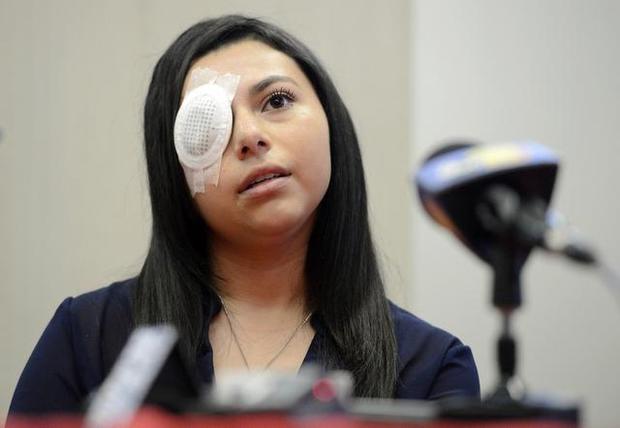 Fresno County sheriff’s detectives have identified a potential suspect in the shooting of 16-year-old Brianna Ramirez, who was shot in the eye last month in Parlier while riding in a car with her mother, newly released Superior Court documents say.

Detectives have talked with Jorge Alberto Calleres, 24, a Bulldog gang member with a lengthy criminal record. During the course of the investigation, Calleres was booked into jail on a probation violation, served his time and has since been released, sheriff’s officials said Thursday in a news release.

Sheriff’s officials say Brianna, a sophomore at Sanger High School, and her mother were headed home in a Toyota Camry when several rounds were fired in their direction about 10 p.m. Feb. 12 on the 400 block of Fett Street. One of the bullets passed through a car window and struck Brianna as she sat in the front passenger seat.

Calleres’ parents live on the 200 block of Fett Street in Parlier, the Superior Court documents say.

Those same documents spell out the course of the investigation into the shooting that has rallied the Valley against random violence. According to the documents:

A witness to the shooting said she believed she saw someone nicknamed “Macetas” wearing a red shirt or sweatshirt, standing behind a blue truck when Brianna’s car was hit by gunfire. Detectives later identified Calleres as “Macetas.”

Detectives went to Calleres’ parents’ home, but they denied seeing him on the night of Feb. 12. The parents said the last time they saw their son was around Feb. 10. They also denied that their son owned a gun.

But the parents admitted that their son is a Bulldog gang member. They told detectives that their home was shot at about two weeks before Brianna was struck.

Fresno County Jail records show Calleres is not in custody.

Court records say Calleres has several tattoos, including “Parlier” on his chest, a bulldog on his stomach and “Calleres” on his back. He was arrested for brandishing a firearm, participating in a street gang and assault with a deadly weapon in 2009, possession of drugs in 2011 and auto theft in 2012. He is on probation until July 2017.

The sheriff’s news release said the investigation has led detectives “in different directions, focusing on more than just one potential suspect.”

Brianna’s case and an unsolved shooting Jan. 19 in Fresno that killed 9-year-old Janessa Ramirez (no relation) have put the focus on random violence in the central San Joaquin Valley. Brianna Ramirez drew cheers this month when she met with her Sanger High softball teammates at the school and asked for witnesses to step forward: “I do believe someone knows something, they just don’t want to own up to it. Not just for my sake, but my whole neighborhood’s sake, I would like someone to speak up.”

A $9,000 reward is available for information leading to an arrest in the shooting that injured Brianna.

On Friday, Brianna will receive a $10,000 scholarship from Clovis New Car Dealers Association at the Fresno County Sheriff’s Office headquarters in downtown Fresno. The money will be put aside in an account for Brianna to use for any educational needs after high school.