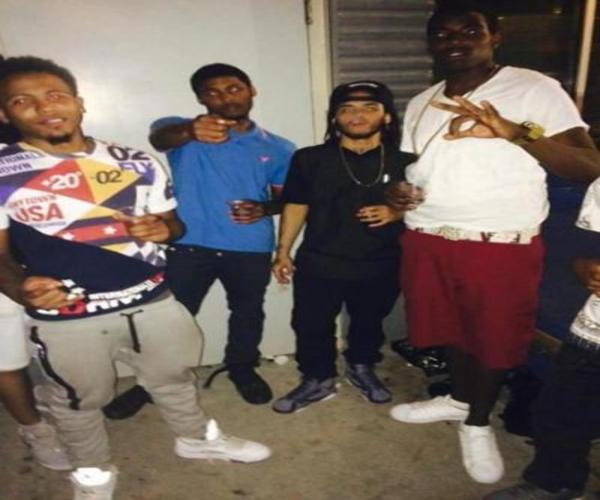 A reputed Bloods gang member who was shot for disrespecting the Crips gang by wearing blue pants plastered with Band Aids, was found guilty Thursday of possessing an illegal handgun.

Kadeem Bacote, 24, was already a convicted felon for a prior robbery so he was prosecuted on the gun charge in Brooklyn Federal Court. He faces up to 10 years in prison when he is sentenced by Judge Frederic Block.

Bacote was wounded on June 9, 2015 outside the Louis Armstrong Houses in Bedford Stuyvesant where there were dozens of shootings last summer.

The gangbanger was clearly courting trouble by wearing a red bandana and the bizarre blue trousers covered with bandages.

“(An NYPD cop) was so surprised seeing this, that he actually stopped to talk to him and said, ‘What are you doing walking around here dressed like that?'” Assistant U.S. Attorney Artie McConnell told the jury in his closing statement.

“And what does (Bacote) tell him? He identifies himself as a Blood. He says, ‘Actually these blue pants are meant to be disrespectful to the Crips. Look at the Band Aids that I’ve placed on them.'”

Red is the Bloods’ gang color and blue is associated with the rival Crips.

On June 23, NYPD gang unit cops, acting on a tip from a confidential informant, that a man matching Bacote’s description was carrying a .38 revolver in a plastic bag, spotted him ducking into a building. The bag and gun was found inside a radiator in the building.

“Two weeks later to the day, he’s back on the same street, on the same block, except this time he’s the one who’s armed,” McConnell told the jury.

Defense lawyer Mia Eisner-Grynberg argued that the cops’ story was a load of fiction. “It is very incredible to the point of being insane,” she told the jury. “You got this young black man supposedly on a bad block in Bed-Stuy wearing this outfit that is so crazy that this gang officer has never seen something like it in his life.”