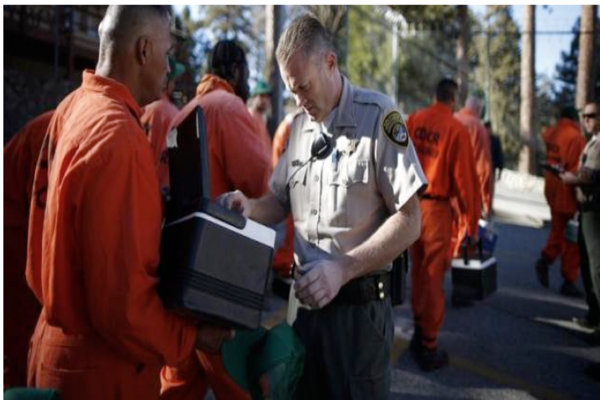 Diaz ran from police officers, pulling out a handgun and fired in the direction of the two police officers. The police officers returned fire and killed him. One police officer sustained a gunshot wound to his shoulder area and a second officer injured his back as he darted away in his attempt to avoid being struck by gunfire.

Diaz, a hard-core gang member, had an extensive criminal arrest and conviction history having served time in state prison for Armed Robbery and Ex-felon possession of a firearm. Diaz, with his noted violent criminal history was classified as a “low- level, non-violent” criminal offender, currently supervised by the Los Angeles County Probation department under AB 109. He was last released from Los Angeles County jail on April 22, 2016 after having served 10 days for a probation violation under AB 109.

Malachi’s job is “community relationships.” Her latest endeavor is making videos of dancing police officers (the Running Man’s New Zealand dance challenge.) Thanks to Beck, her newly created job duplicates efforts of all other Divisions (at a great waste of money to taxpayers.) Her job description does not include intrusion of crime scenes before they’re investigated.

While Malachi’s officers were dancing in front of a camera, a woman walking through Lincoln Park in Lincoln Heights on May 9 (also in LAPD Hollenbeck Division) was approached by a Hispanic male who held a gun to her head, forced her into a public restroom and sexually assaulted her. Fortunately, the victim was able to give responding police officers an excellent physical description, including distinctive facial tattoos to police. Within a short time, Police officers from both the LAPD Hollenbeck Specialized gang unit and Detectives assigned to LAPD’s elite Robbery-Homicide unit were able to identify Edgar Alexander Lobos and arrest him. Lobo is a 27 year-old hard-core gang member and ex-felon.

According to Captain William Hayes, Lobos had an extensive criminal arrest history that includes vandalism and domestic violence but was classified as a non-violent, low-level criminal offender and was under the supervision of the Los Angeles County Probation department under AB 109.

These are the most recent examples of the epic “fails” triggered by Governor Jerry Brown and his quest to empty out California State prisons.

Since the passage of AB 109, hundreds of “low- level, non-violent” offenders have killed, raped, assaulted, maimed and kidnapped innocent victims. In 2014, voters passed Prop 47 that Governor Jerry Brown touted as the Bill that would reclassify drug and theft crimes that involve less than $950 from felonies to misdemeanors. Now two years later, criminals have an easier time committing crimes because they know they’ll get no more than a “slap on the hand.”

Both Beck and Mayor Eric Garcetti have remained dreadfully silent while violent criminal offenders, hard-core gang members supervised and placed under AB 109 and Prop. 47 are being let out of prison after spending little to no time in prison and are reoffending in record numbers.

Both violent crime and property crimes rates are escalating with each and every passing day within the city of Los Angeles.

Malachi’s Division could be just as effective with civilian clerical workers rather than $100,000 per year paid police officers who serve the City best by patrolling the streets — not dancing in production videos.

For those who don’t know, crimes that fall under AB 109 are not always “low level, non violent” crimes. Many of the inmates’ current convictions generally fit that description, but past crimes committed by some of these offenders have ranged from violent assaults to sexual offenses, child abuse and second-degree murder.

As the November elections draw near, Governor Brown is using his campaign funds to gather signatures that would place the “Public Safety and Rehabilitation Act of 2016” initiative on the November ballot. Brown’s duplicitous claim that his measure applies to only “non violent felony offenses” has the California District Attorneys Association (CDAA), and a host of other organizations, engaging in a battle against this initiative. Brown amended the initiative that originally concerned only the reform of rules for juveniles being tried in adult court. His amendments now add inmates to the fray.

The California District Attorneys Association filed a lawsuit against the Governor in February 2016. Sacramento County District Attorney Anne Marie Schubert said Attorney General Kamala Harris should not have accepted Brown’s January 25 amendments to the proposed ballot measure filed because “the filing is not an amendment of the prior initiative draft – it is a completely different and new initiative.”

This does not bode well for innocent people who live and work anywhere in the state of California. The effects of both Prop 47 and AB 109 have been the abysmal failures that have left hundreds of innocent victims in their wake. In Los Angeles, Chief Charlie Beck sits smiling. He gave his support to both AB 109 and Prop 47 along with his support for Brown’s half-baked ballot initiative.

From all over the City, San Pedro, Harbor, Van Nuys, Mission Hills, Sunland-Tujunga, East Los Angeles and even Northeast Los Angeles, residents, stakeholders, community groups, community Police Advisory Board members. Neighborhood Councils and Neighborhood Watch Captains are demanding more patrol officers for their areas. Currently there are over 600 police officers who do nothing but clerical work within LAPD. Malachi’s Community Relationships Division has more than 100 officers who do nothing but photo-ops and videos.

It is patently dangerous for all citizens in Los Angeles and both Beck and Garcetti know this.

Garcetti, for his part, believes training parolees to pick up trash on roadways can rehabilitate them. Each parolee will have a shot at a 90-day employment opportunity, costing taxpayers thousands of dollars. Oh, and did I mention life skills training, cognitive treatment and therapy?

On May 27, Garcetti spoke at a Press Conference in South Central about the debt of gratitude Angeleno’s should be paying prisoners. “When people have paid their debt to society, our debt of gratitude should be, not just thanking them for serving that time but allowing them a pathway back in,” he said.

What? Garcetti should be thanking taxpayers for shelling out more than $47,000 per year to incarcerate each inmate who violated the rights on an innocent person in the commission of a crime. Common sense dictates that victims of violent crimes deserve “at least” some of the respect Garcetti offers to parolees — something he neglected to offer!

Perfect timing for such a stupid statement from the Mayor of Los Angeles — as the City cries for more police officers to patrol the streets of Los Angeles and Brown wants voters to let even more dangerous, violent felons out of prison.