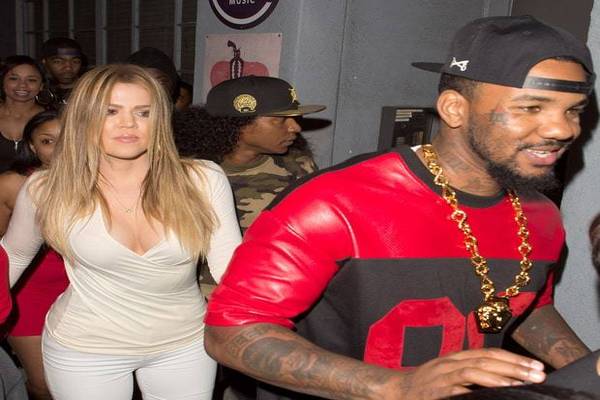 Khloe Kardashian and The Game leave a club together in 2014. Splash News

Not mincing any words! Rapper The Game claims in a new song he released Saturday, August 13, that he’s had intimate relations with not one, not two, but all three Kardashian women.

“I used to f–k bitches that Usher Raymond passed on / Then I f–ked three Kardashians / Hold that thought,” according to the controversial lyrics of his new song, “Sauce.” Though it is unclear whether the 36-year-old rapper means the verse in jest or as a literal declaration, it’s obvious that the words are meant to elicit a reaction.

my haters … F–k yo childhood pet.”

In the image, DJ Khaled, who is featured on the track, can be seen floating on his back in a clear blue sea with the word sauceforming in clouds above him.

The Game was previously linked to Khloé Kardashian following her split from ex-husband Lamar Odom, but the rapper denied that the pair was ever romantically involved.

“Those are just rumors,” he told DJ Charlie Sloth on BBC Radio1Extra in 2014. “It’s funny, man, ‘cause me and Khloé, we’re cool. People don’t know, but I’ve been knowing Khloé for 12 years, you know what I’m saying? I went and dated Kim for a while. A little short while. Me and Khloé are cool.”

The Game, né Jayceon Taylor, did not dive into further detail about when and for how long he dated Kim, 35.

On Friday, August 12, the rapper attended pal Ray J’s Los Angeles nuptials to his fiancée, Princess Love, and shared several snaps from the lavish affair. (Ray J and Kim famously made a 2003 sex tape that was leaked in 2007.)

“We been down since 7th grade … That’s 20 years of friendship … I’m proud of you homie & it was an honor to support you & your wife on your wedding day,” The Game captioned a photo of the pair sitting together on the steps of the altar. “I wish you guys an eternity of happiness & may God bless this union forever & a day … Enjoy each other … Today was beautiful.”