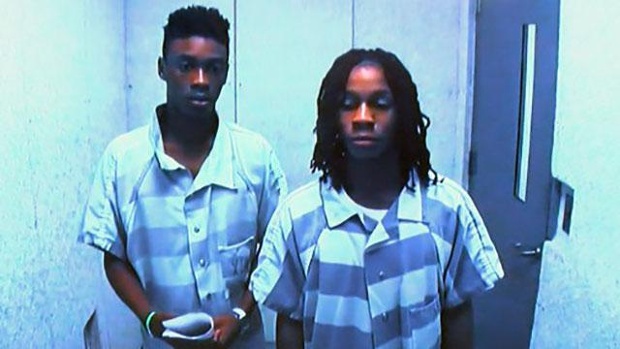 An affidavit said the incident began Monday night when a witness asked 45-year-old Chadwick Garrett of North Charleston to help the teens pull their 2016 Dodge Durango out of a ditch on the side of Durant Avenue.

According to witnesses, Garrett agreed to pull the suspects’ SUV out of the ditch for $20.

Authorities said after Garrett pulled the suspects’ vehicle out of the ditch, Garrett asked the suspects about the money they owed him, at which point Frasier took out a gun and fired multiple shots striking Garrett in the chest.

The affidavit states Frasier then got into the passenger side of the Durango while Tyler drove.

Authorities said 20 minutes after the shooting happened, 911 operators got a call from a woman at a Dorchester Road apartment about the suspects using her SUV without permission.

According to investigators, she gave a description of the vehicle and two men who had her vehicle which matched the suspects’ vehicle.

The affidavit states the woman tried to cancel the police response due to the vehicle being returned.

When officers arrived at the woman’s home she told authorities that the suspects were inside the home.

Officers said, following a brief standoff, the suspects were taken to City Hall where they both waived their Miranda Rights.

In addition to the murder charge, Frasier also is charged with possession of a weapon during a violent crime.

According to court records, he is out on bond on a charge of possession of a stolen car.

Frasier and Dupree-Tyler were denied bond in court Tuesday night.

Garrett’s family was present during the hearing and called the two teens “cowards.”