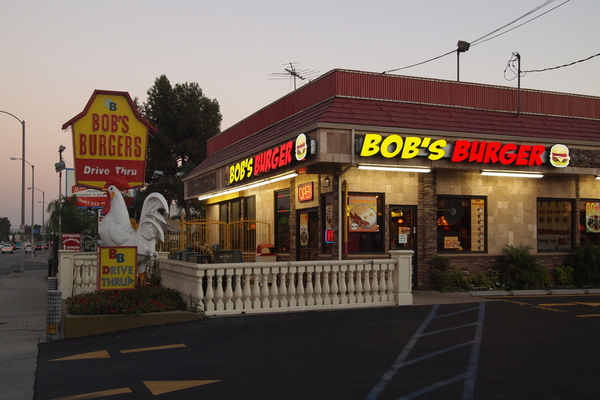 Detectives arrested an 18-year-old gang member early Thursday morning in the Harbor City burger restaurant shooting that resulted in the deaths of the intended victim as well as the longtime owner of the shop.

Joe Mendoza of Harbor City, a member of the Harbor City Boys gang, was taken into custody at about 1:30 a.m. and has been charged with two counts of murder, said Los Angeles police Harbor Division Detective Scott Coffee.

“We had some early leads that we worked the rest of the day to develop further,” Coffee said of the investigation.

Coffee said it is believed, but not yet confirmed, that the intended victim — Louis Garcia, 23, of Wilmington — was a member of another gang.

“It appears at this point that some type of dispute may have occurred a few days prior to the shooting,” Coffee said. “We’re still trying to pin that down. But it looks like Mr. Mendoza became aware of (Garcia’s) whereabouts and walked in through the back door” of the restaurant.

The suspect then allegedly fired “numerous” rounds, Coffee said, some of which struck the restaurant owner, 61-year-old Charalambos “Bobby” Antonelos of San Pedro, as he stood near the cash register. Five or six people were in the restaurant at the time, Coffee said. No one else was injured.

“It was a very hectic scene,” he said. “It could have been a lot worse.”

Coffee said Mendoza was arrested at a residence about a mile from the scene of the shooting. He was booked at LAPD’s 77th Division jail and will remain in custody.

An employee said Bob’s Hamburgers had been operating for about 30 years, and distraught customers told reporters that the longtime owner was known for giving out free food to those in need.

“He was really just a good man,” said Antonelos’ niece, Leticia Page, 39, of San Pedro. “He worked hard and he was finally going to retire. You never know. It’s just awful.”

She and some of Antonelos’ other family members stopped by a growing memorial Thursday outside Bob’s Hamburgers, which will remain closed indefinitely.

The family was planning to set up a GoFundMe page and some local residents also were planning hold a fundraiser in a Harbor City park for the family.

Antonelos came to the United States from Greece in 1977 and married in 1978, Page said. They had no children but are part of large extended family based in San Pedro.

Antonelos was helping to care for his wife at the time of his death and had just recently sold his interest in the burger shop to his longtime business partner in preparation for retirement. He was working the morning shift Wednesday, with his partner set to come in for the afternoon.

Before he and his partner bought the restaurant on Pacific Coast Highway in 1985, Page said, “He worked at Troy’s Burgers in San Pedro for a lot of years and then at Spiro’s” Burgers at 240 S. Pacific Ave.

“He was a fixture in the community for 30 years, not just with people who lived around there but with employees at Kaiser (Medical Center) who frequented the restaurant,” Page said. “He always had a smile on his face and a toothpick in his mouth. He was just good to people.”

The investigation continues and anyone with information is asked to call Coffee at 310-726-7887.