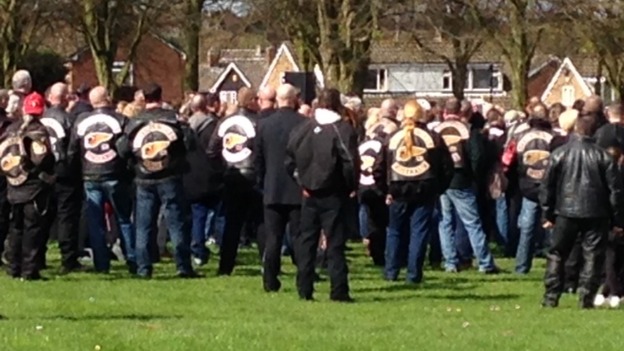 Now Jason Francis Wallace, 27, has been charged with second-degree murder. Sources also confirmed that he turned himself into police – a smart move considering what happened to John Rodgers back in 2001 after the murder of Hells Angel Donald Roming outside a Vancouver bar. Rodgers was shot to death a short time later.

The man accused of killing Hells Angel Bob Green was out on bail at the time of the shooting on drug trafficking charges that he faces with Green’s cousin.

Jason Francis Wallace, 27, was charged Tuesday with second-degree murder for the fatal shooting of Green on a rural Langley property Sunday morning.

But just a year ago, B.C.’s anti-gang agency described Wallace as a member of the 856 Gang after he was arrested with Langley resident Leonard Pelletier, 49.

Pelletier is a cousin of Green, the high-ranking Hells Angel found dead about 10:30 a.m. Sunday in the 23700-block of 72nd Avenue.

The murder is believed to have stemmed from a dispute at an all-night party.

PostMedia has learned that Wallace himself called police to say he was a suspect in the fatal shooting Sunday. That led to his dramatic arrest by Surrey RCMP on 152nd Street Monday morning about 10 a.m.

Foster said she couldn’t comment on whether Wallace had turned himself in.

“I can’t speak to the details of what led up to Mr. Wallace’s arrest,” she said.

“While police are learning some specifics of what took place preceding the homicide, the motive remains unclear.”

She said investigators are trying to find witnesses who fled the scene before police arrived and found Green dead.

“They may have paramount information that will assist in piecing together what occurred,” Foster said.

At the time of Green’s slaying, Wallace was out on $1,000 bail after being arrested with Pelletier on several charges of possession for the purpose of trafficking in June 2015.

The charges stemmed from a 2014 investigation by the Combined Forces Special Enforcement Unit into drug trafficking activities by the 856 Gang.

Officers searched a rented apartment in the 4600-block of 236th Street in Langley and discovered large quantities of cocaine, methamphetamine, heroin, OxyContin, and a cocaine-cutting agent, as well a 20-ton press used to create bricks of cocaine.

The gang takes its name from the telephone prefix for Aldergrove and has expanded into other parts of B.C. and Alberta in recent years.

Wallace has a long and violent history in B.C.

He pleaded guilty eight years ago to aggravated assault for stabbing a student after a high school graduation party in Langley. He got a 21-month conditional sentence.

“The attack was completely unprovoked and the victim did not know his assailant,” RCMP Cpl. Diane Blaine said at the time.

Wallace had originally been charged with attempted murder for the stabbing.

He was also charged, along with Pelletier’s son Caylen and a third man, in 2010 with trying to run over a pedestrian with a truck in a parking lot near a community police office. In that case, Wallace and Pelletier were eventually acquitted on all charges, including attempted kidnapping. Their co-accused Craig Ivan Dennis was convicted only of theft.

Wallace and Green had several friends in common who were lamenting the tragic shooting on Facebook Monday.

Three police cruisers remained at the scene of the fatal shooting throughout the day Tuesday, blocking the long driveway right beside railway tracks just north of the TransCanada Highway.

The property has a quonset hut, at least one trailer and several semis parked on it. It appears to be part of a larger acreage.

Foster said the property was on the radar of Langley RCMP prior to Green’s murder. Police block entrance to property where Bob Green was killed

Green was in the Hells Angels for more than 20 years and was described by police sources as a leading underworld figure.

But to his devastated friend Debra Atherton, he was  “a wonderful man with a big heart who absolutely loved his family and was always showing people pictures of his kids.”

She said that when her husband died in a motorcycle accident several years ago, “Bob was there for me and my baby whole-heartedly. ”

“He would take us on his family trips, include us in his Christmas festivities and all other holidays, he treated my daughter like one of his own and that was something she desperately needed when we lost her dad. Bob was there for me until I didn’t need him so much anymore,” she said in an email. “Through the years he has always been there for me and never judged me for my mistakes, always had a big smile and warm hugs when we saw each other. He was one of my dearest friends.”