David Piina, with and without his tattoos. (Photos: courtesy Steven Burton) 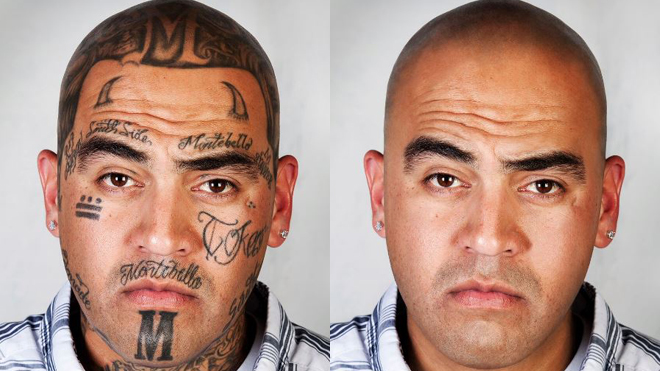 Photographer Steven Burton wants to change the perception people have when they see the tattooed faces of former gang members living in Los Angeles.

Using Photoshop, he turned back the hands of time on their marked faces and bodies to remove their tattoos and show them what they would look like without the ominous signs and symbols that still connect them to their former lives.

Burton met many of the gang members through a friend working at Homeboy Industries, a non-profit founded in 1988 by Father Gregory “Greg” Joseph Boyle, a Jesuit priest.

“I started off with four home boys and invited them to my studio,” Burton told Fox News Latino.

“It was pretty apparent how intense it was going to be for them to see themselves without tattoos,” he said.

The professional advertising and portrait photographer knew he wanted to create a book of before and after images. He says he had interest from Powerhouse Books, but it’s an expensive book to create, so he’s raising money through a Kickstarter campaign

to help produce the book.

It will be called, “Skindeep: Looking Beyond the Tattoos.”

Burton also videotaped the reactions of his subjects as they saw themselves for the first time in years without tattoos. One man said he hadn’t seen himself free of the tats since he was 13. He told Burton he believes he’ll be more accepted by employers, and he won’t be judged as harshly by others.

“It blows my mind how young they start in the gangs,” Burton said. “A lot of them are born into the gangs. It’s all they know. After the initial shock of seeing themselves without the tattoos, they say they want to show the photos to their mothers. Almost all of them have spent time in juvenile hall. Every story is so shocking with so much violence involved.”

The Los Angeles County Sheriff’s Department estimates that there are about 65,000 gang members living in its jurisdiction.

Burton says the idea of virtually removing the tattoos gives the former gang members the motivation to keep going with the laser tattoo removal offered free through Homeboy Industries – which can be painful and take several months.

“The tattoos on the face are often connected to trauma. It’s done out of youthful bravado. By taking the tattoos off, it’s like escaping the gangs,” Burton said.

He added, “I think no matter what’s happened to you or what you think of gang members, the only way to stop this is to stop the cycle, and it has to start with gang members themselves.”