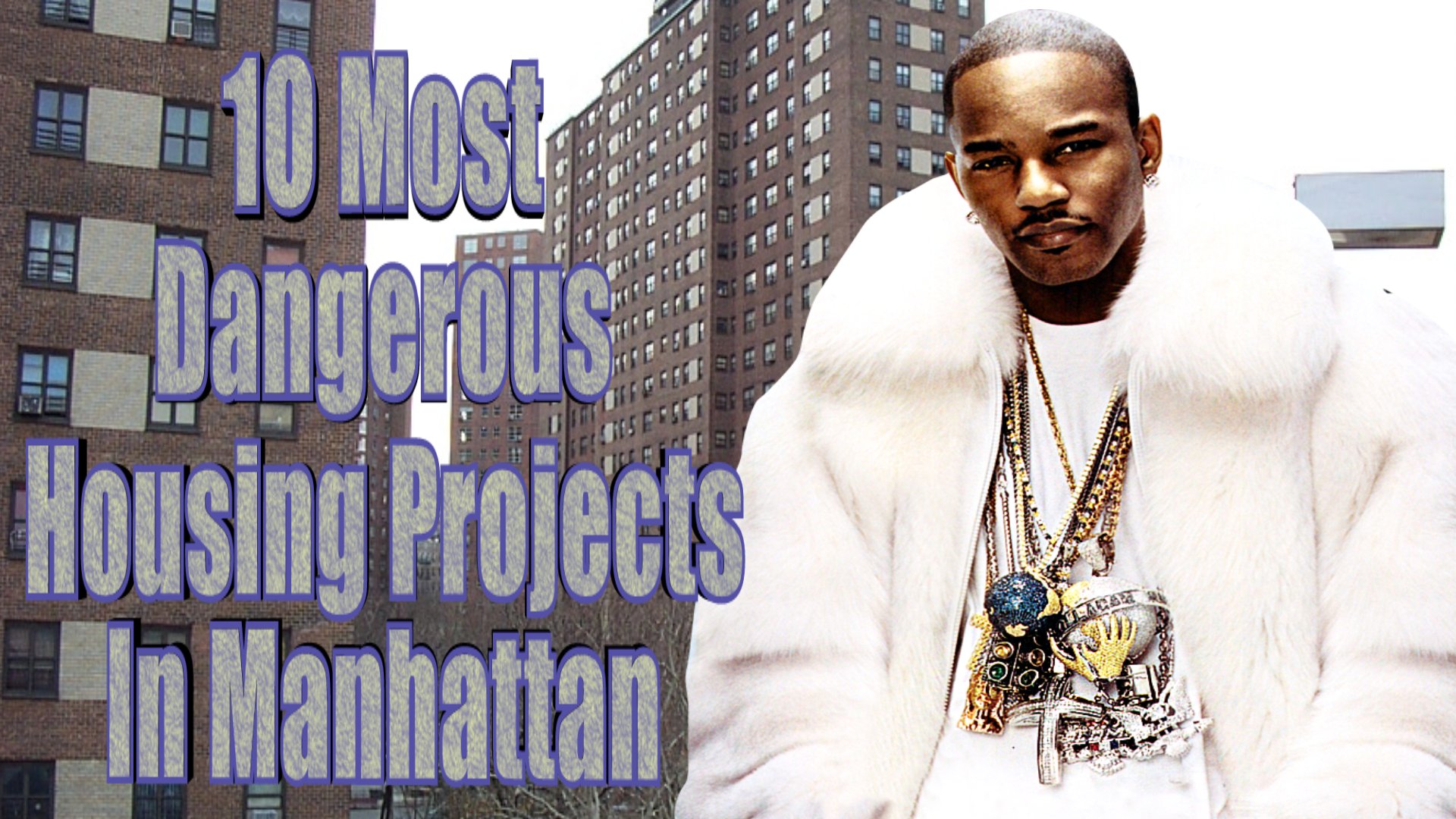 The inner city of Manhattan is what most tourists will refer to when talking about New York. Famous for its skyscrapers and the beautiful boulevards, this borough is often considered the financial and political capital of the world.

The United Nations Headquarters and the Financial District further fuel the idea that nothing could go wrong while visiting the peninsula The Empire State Buildings and the various universities, though, shouldn’t be taken as the sole example of how life goes on in the area.

Like other places in the US, Manhattan also hosts a plethora of low-income families. Often segregated within the boundaries of projects and housing complexes, these people live an existence that shares nothing with that of the bankers and of the movie stars.

In this article, we’ll go through 10 of the most dangerous locations and NYCHA complexes in Manhattan. If you find yourself in the city, you’d may want to think twice before venturing through these neighborhoods!

Not even a name as important as King’s could save those living here from the deplorable conditions that they are forced to deal with. In April 2017, an article published to the NY Daily News website showed how most of the units lacked sufficient plumbing and suffered from serious electrical problems.

In December 2016, NYCHA had sent crews to begin working on repairs. Dwindling funding, though, meant that the works were never completed. Some of the residents are currently forced to wash their dishes in the bath-tub, while the administration tries to come up with a solution.

Number 9: Grant Houses
Spanning from 123rd to 125th Street, the General Ulysses S. Grant Houses were constructed in 1956 to cater towards the city’s growing population. The tallest in New York at the time, these projects offered a total of 1940 apartments and were designed to achieve maximum sunlight exposure.

When the complex was first opened, the New York Times noted how the first tenants were “two White, two Negro and one Puerto Rican” families. Demographics shifted as the years went by, with the area currently being inhabited mostly by African and Latino-American families.

According to some tenants, the Grant Houses are not an abysmal place to call home. Yet one of them notes how “the hallways are a walk-in urinal”, while others advise to keep to oneself and to be afraid.

The last few years brought a glimpse of hope to the eyes of those living here. In 2012, the New York Times reported how constant police work had led to most of the gangs giving up arms and abandoning their posts. Up to that point, there really was no way for residents to avoid coming in contact with drugs.

Violence seems to be far from over, though. Roughly a year ago, in 2016, a gang-related shooting left two men and a teenage boy on the ground. While none of the casualties were fatal, this episode shows just how dangerous the neighborhood still is.

Number 7: Lillian Wald Houses
One of the first projects built in the years after World War II, the Wald Houses take up the 16.5 acres between Avenue D and Houston Street. Within its premises, 16 buildings provide tenants with 1,847 apartments. Several community centers, a theater, and counseling services are also available to all living here.

With such premises, it wouldn’t be strange to think of this place as a rather peaceful and well-developed one. Instead, residents at the Wald Houses still have to deal with violence, drugs, poor maintenance, and all of the other issues plaguing the rest of NYC low-income facilities.

In January 2017, a 27-year-old Latino woman was found dead in her apartment. With a scarf tightly wrapped around her neck, the most likely cause of death could have been strangulation. Lack of proper surveillance, though, made it hard for members of the local police precinct to verify the events.

Number 6: Alfred E. Smith Houses
Dedicated to one of the most influential governors of New York, the Alfred E. Smith projects can be found in the Lower East Side of Manhattan. Built and completed in the early 50s, the complex and its 1931 apartments were first opened on April 1st, 1953. Prominent inhabitants included soul singer Luther Vandross.

In recent times, police invested large amounts of manpower and money to fund several operations aiming to epurate the area from the presence of drug dealers and gangs. In April 2017, a sting led to the arrest of two drug kingpins. Narcotics and weapons were confiscated as a result.

That wasn’t enough, though, to keep violence and crime in check. Less than 4 weeks later, on April 30th, a man was assaulted and robbed by a group of masked felons. The four perps knocked on their victim’s door, pushed him inside, and fled the scene with money and electronics.

Number 5: Frederick Douglass Houses
Between 100th and 104th street, in the Upper West Side neighborhood, the Fredrick Douglass Houses complex can be found. Relatively large, this low-income village features 2,056 apartments, all completed before June 30th, 1958. An extension would then be added in 1965.

Close to 4600 people call these projects their home. Among the others, soul singer Kelis and actor Mekhi Phifer both spent their childhood at Fredrick Douglass. Most of the old-timers still describe the area as a pretty safe one.

Despite that, police started to notice an increase in criminal activities throughout the neighborhood. In 2016, a man fired into the air three times for no apparent reason before retreating to his home. From February to March of the same year, officers were called to investigate six different reports of shots being fired.

Number 4: Drew Hamilton Houses
This group of 1,210 apartments scattered across a total area of 7 acres was built in 1965. The Drew Hamilton Houses consist of five 21-story buildings and can be found on Douglass Boulevard. The complex includes a day care/after school center, two health clinics, a community center, and several commercial spaces.

The two main problems afflicting these projects are poor maintenance and excessive levels of crime. In 2012, businessman Mike Bloomberg announced plans to speed up maintenance and repair works in an effort to spruce up the place.

On the opposite, crime still seems to run rampant throughout the complex. In 2016, a man entered one of the buildings at Drew-Hamilton and unloaded four shots into an elevator. A 20-year-old woman who was using the machine at the time was hit and wounded.

Number 3: Riis Houses
The Jacob Riis Houses are located on the Lower East Side of the borough of Manhattan, spanning from 6th to 13th street. The project includes 19 buildings, for a total 1,191 apartments. Construction began months after V-Day and was completed by January 17th, 1949.

After a relatively peaceful period, violence came back to the village this year. In January, a 16-year-old man got into a fight with his older sister. Without giving her a warning, the man brandished a knife and jammed it into her relative’s back. When their 47-year-old mother tried to intervene, she was also stabbed.

Furthermore, the Riis Houses became a testament to the birth of a new form of criminal enterprise. When in 2012 a popular hacker was found living within the complex, law enforcement agencies got a clear reminder of how both criminals and crimes are evolving.

Number 2: Jefferson Houses
Named after Thomas Jefferson, the Jefferson Houses are a group of 18 buildings in East Harlem. Completed in 1959, this complex includes 1,486 apartments, a day-care and seniors center, and a mental health clinic.

There’s no toning down the level of violence that goes on in the area surrounding these projects. In 2016, a 17-year-old boy was shot in the head in broad daylight. As families were getting ready for dinner, a group of teenagers approached their target and fired several salvos in his general direction. The kid was left in a pool of his own blood.

In 2017, police indicted 16 people for their involvement with a narcotics ring based off of the project. The traffickers sold crack, heroin, and other narcotics to the cops more than 30 times before being finally picked up.

Number 1: St. Nicholas Houses
The most dangerous public housing project in Manhattan is located in Central Harlem. The St. Nicholas Houses, built in 1954, were born as a safe place for the many veterans returning from World War II. The village includes 13 buildings for a total of 1523 apartments.

Some of the people residing here jokingly call it an okay place to live. “You shouldn’t forget your bulletproof vest”, says a girl on Foursquare. Another resident swears it’s not as bad as people say, but warns that starting a fight will likely lead to an early demise.

The truth is a bit more worrying. In 2014 and 2015, several sources reported an extremely high level of crime through St. Nicholas and most Central Harlem. Shootings, murders, and assaults occurred on a daily basis, with lifeless bodies littering the streets and hallways of this facility.

This was our list of the 10 most dangerous government-managed housing projects in Manhattan.
Have you ever had the chance to walk through some of these locations? Know some stories or first-hand testimonies about the life in a public housing complex?