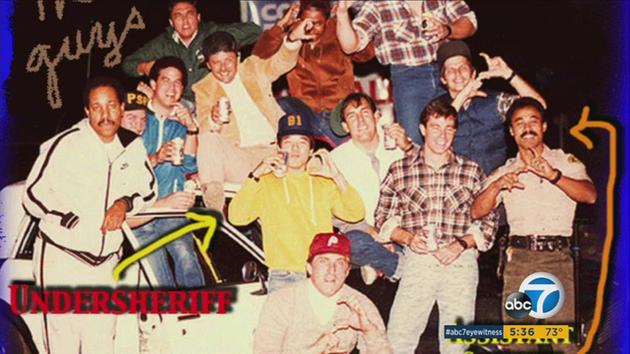 Paul Tanaka faced a punishing cross-examination Monday as he fights corruption charges that could send him to federal prison for up to 15 years.

Prosecutor Brandon Fox grilled Tanaka about his membership in a notorious deputy gang or “clique” known as the Lynwood Vikings.

“It was nothing more than a station mascot,” Tanaka told the jury, adding that there was nothing “sinister” about the Vikings back when he joined the group as a sergeant at the Sheriff Department’s Lynwood station in the late 1980’s.

Fox asked Tanaka if he was aware of the 1991 federal civil rights lawsuit that determined the Lynwood Vikings were a “deputy gang.”

In that lawsuit, the judge actually determined that the Vikings were a “neo-nazi, white supremacist gang” that used “terrorist-type tactics” against black and Hispanic residents in the city of Lynwood.

Tanaka emphasized he was not named in that lawsuit, he’s not sure he was aware of it at the time, and hasn’t read the lawsuit to this day.

Fox asked if Tanaka, as he “proceeded up the ranks” of the department, became aware that the Vikings “engaged in acts of lawlessness,” and did he still have his Viking tattoo?

“I still have the tattoo, sir,” Tanaka said.

Tanaka, 57, has pleaded not guilty to charges of conspiracy and obstruction of justice in connection with a sweeping, federal civil rights investigation of corruption and deputy-on-inmate abuse inside the jails, which are run by the LASD.

Prosecutors allege the former Undersheriff led the scheme to hide inmate-turned-FBI informant Anthony Brown once the LASD learned Brown was feeding information to the FBI from behind bars.

Brown’s cover was blown in early August of 2011 when deputies discovered a contraband cell phone smuggled into him by a corrupt deputy as part of an FBI sting.

On the witness stand Monday, Tanaka’s memory of key events was hazy. He testified that he does not remember the Friday, August 19th meeting with then-Sheriff Baca and other LASD investigators.

As for that crucial Saturday meeting held on August 20th? Tanaka denied that he knew by then that LASD investigators had linked Brown to the FBI.

To rebut that testimony, Fox played audio of an interview LASD investigators conducted with Brown on August 19th, 2011. The recording indicates that the LASD knew then Brown was working with the FBI.

Previous testimony has indicated that Baca and Tanaka were briefed on the FBI link by investigators both Friday and Saturday.

Deputy Mickey Manzo: “Because we are going to probably be hanging out with you quite awhile today and we have this meeting with very influential people in our department,”

Deputy Gerard Smith: “So, the Feds are here, they’re doing investigations. I’m assuming they’ve either watched or set up transactions with whoever CJ is on the outside, watched them go down with a deputy.”

“I don’t remember being upset at the Saturday meeting,” Tanaka told the jury, despite prior testimony from convicted deputy Mickey Manzo that Tanaka was “mad, irate.”

“He slammed his hands on the table, and said ‘those mother-f—–s, who do they think they are? F— ’em,'” Manzo testified last week of Tanaka’s demeanor at that Saturday meeting.

Distancing himself from the operation

Tanaka tried to distance himself from the operation, testifying at one point that he “wasn’t involved in their investigation,” when asked about LASD sergeants telling deputies not to cooperate with the FBI.

Fox also asked Tanaka about the LASD conducting its own undercover operation to determine what Brown had been telling the FBI.

Tanaka admitted that he met with Lt. Steve Leavins ahead of the operation in which an undercover LASD officer posed as a “beaten inmate,” and was placed in Brown’s cell to elicit information.

“I don’t know why I was there,” Tanaka testified, adding that it may have been “coincidental.”

Tanaka also admitted to authorizing overtime for the LASD deputies assigned to stand guard outside Anthony Brown’s cell, saying it was for the inmate’s security.

Tanaka has tried to pin most of the wrongdoing on his former boss, then-Sheriff Leroy Baca, stating that Baca took a “very strong interest in the investigation.”

Tanaka testified on direct that Sheriff Baca gave the orders to isolate and interview inmate Brown, analyze the phone and figure out how it got into the jail.

On cross-examination Monday, prosecutor Fox walked Tanaka through a month’s worth of phone records that show only one phone call between Sheriff Baca and the other key players in the scheme to hide Brown, intimidate witnesses and threaten an FBI agent with arrest.

In the same time period, however, Fox showed a flurry of calls between Tanaka and those same key investigators. Tanaka said it’s possible Baca called the investigators from phones belonging to his aide or his driver.

Tanaka defense attorneys called a series of character witnesses to the witness stand Monday, each testifying that the Paul Tanaka they know is honest and trustworthy.

One current LASD deputy told jurors that Tanaka had changed his life by giving him a second chance at a career in law enforcement. Two of the character witnesses acknowledged they had donated to Tanaka’s political campaigns.

Another character witness, current LASD Captain Chuck Antuna, told jurors that he’s been friends with Tanaka for at least a decade. The two share a “passion for fishing,” vacation together frequently and first met while working together at the Lynwood station back in the mid-1980’s.

“You have a Viking tattoo, correct?” Fox asked Antuna. “Yes,” the Captain replied.

Federal Judge Andre Birotte was called by the defense to testify about the events of that summer and fall of 2011. Birotte, who was U.S. Attorney for the Central District at the time of these events, told jurors about two high-level meetings he had with Sheriff Baca.

Of the first meeting in late August, Birotte described the conference table as “fed folks on one side, county on the other.”

“There was no yelling or anything like that,” Birotte testified, but the Sheriff did “voice his displeasure” about the LASD not being “in the loop of the investigation.”

“Who did most of the talking?” asked Tanaka defense attorney Dean Steward.

“Sheriff Baca,” answered Birotte, adding that he did not recall Tanaka speaking at the meeting.

The prosecution has indicated it will then call two rebuttal witnesses. Judge Percy Anderson told jurors Monday that closing arguments should wrap up by noon on Tuesday and then they will begin their deliberations.