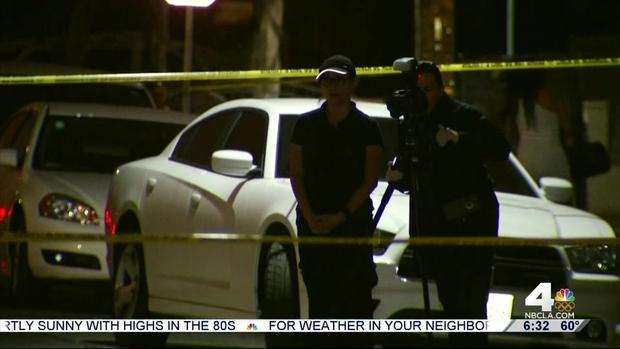 Authorities are investigating a series of shootings in Compton that left four people dead over the weekend in separate incidents — two within hours of each other.

The carnage raised the city’s homicide toll to 11 so far this year — nine of them tied to gang violence — compared to four as of mid-May last year, according to the Los Angeles Sheriff’s Department.

At this point, there is no apparent connection between the three shooting attacks, said Sheriff’s Homicide Lt. John Corina. The violence began at 5:20 p.m. Saturday when a man riding a bicycle in the 400 block of West Caldwell Street was shot multiple times in the torso, according to the Los Angeles Sheriff’s Department.

Deputies responding to reports of an assault with a deadly weapon arrived at the scene outside Robert F. Kennedy School and found a man in his 20s lying in the middle of the street.

The victim was transported to a hospital where he was pronounced dead.

About two hours later, a man was walking in the 1000 block of South Nestor Avenue when a dark four-door sedan passed him, then stopped, LASD said. One passenger got out of the vehicle and fired several rounds at the man, striking him multiple times. The victim was pronounced dead at the scene. He was identified as Andre “Dre” McMihelk, Jr., 32. Neighbors said he had driven from Long Beach to visit with relatives.

The violence spilled over into Sunday, when two men were killed after a gunman opened fire into a car that was pulling out of a Compton gas station, authorities said.

Series of Compton Shootings Under Investigation A third man in the car, a 26-year-old, told deputies he and the other victims were pulling out of the gas station parking lot when an unknown man, waiting on the sidewalk, started shooting into the car.

The gunman then got into a white pickup truck and drove off in an unknown direction.

No suspect information was made available in the shootings.

“Public safety has been and will continue to be one of the top priorities of my Administration, the Compton City Council and Los Angeles County Sheriff’s Department. We continually need the support of the entire community to help apprehend those responsible and hold them accountable for their actions.

The City of Compton continues to seek funding opportunities and partnerships to enhance public safety in our community. As a result, we are now a member of the Department of Justice’s Violence Reduction Network (VRN) which provides additional resources to address crime.

Compton has dedicated maximum resources to addressing these serious violent crimes, including proactive prevention and intervention methods. I am currently supporting Measure P, a ballot initiative on the upcoming June 7th election that will provide additional revenue to address our streets, lighting, public safety and gang prevention programs in Compton.

The only way to keep crime down in the community is for everyone to work together. If you know something about the shootings this past weekend or any shooting in Compton, please contact the Los Angeles County Sheriff’s Department’s Homicide Bureau at 323-890-5500. Anonymous callers can contact Crime Stoppers at 800- 222-8477.”