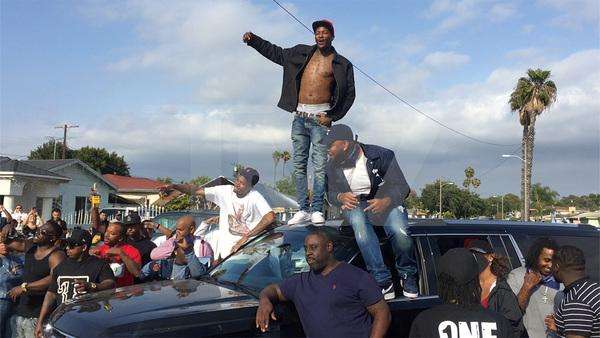 Yesterday, while YG and AD were filming the video for their single “Thug” in Compton, a series of gunshots sent people on the set “running and ducking,” TMZ reports. According to police, no one was injured and no one was arrested. Police found casings from an AK-47 and told TMZ that the shooting appeared to be “gang related.” YG, AD, and other people involved with the video were briefly detained by police. Find footage from the set of the video below.

Last year, YG was shot while working in the studio. He addressed the incident in an interview, saying, “I’m hard to kill.” His recent video shoot for “FDT” (Fuck Donald Trump) was shut down by police.

YG recently confirmed that his new album Still Krazy is coming next month. On May 21, his new single “Why You Always Hatin’?” will debut on Drake’s Beats 1 show OVO Sound Radio.